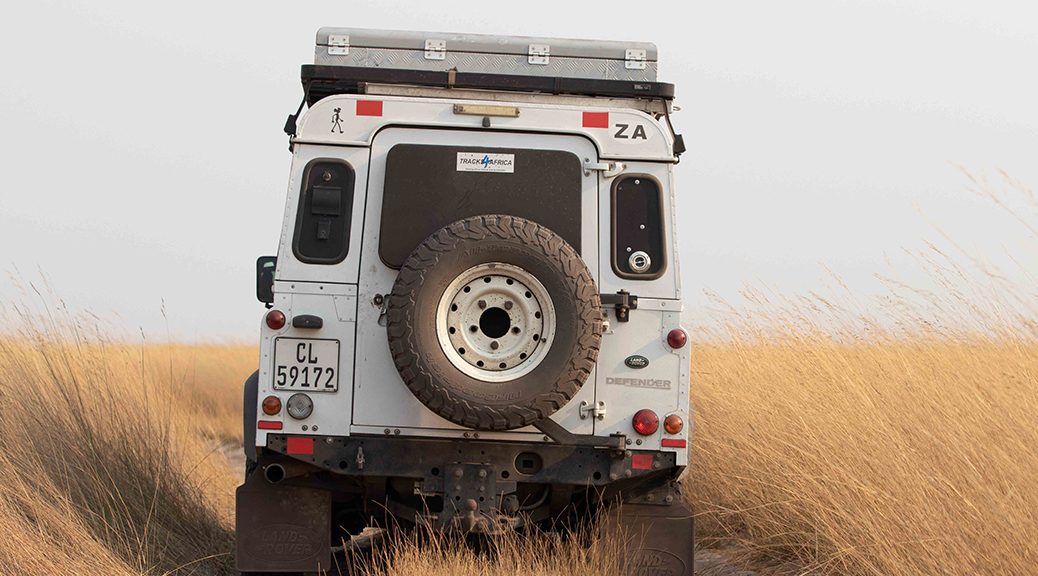 The Tracks4Africa expedition vehicle for the past seven years has been a Land Rover Defender. It’s a vehicle which evokes a lot of emotion – both positive and negative. By Johann Groenewald

I chose the Defender for its photogenic attributes, so yes, it was an emotional decision. But for seven years the Landy has served my family and me as a very capable overlanding vehicle. It is now time to replace it and I thought that I would share some of our adventures as a way of saying goodbye to an old friend.

One of our first overlanding trips as a family was to Zambia and Malawi.  For this trip, we towed a camping trailer to accommodate the five of us. I was immediately impressed with this modern Defender which could tow a trailer and maintain decent highway speeds from Cape Town to Zambia. It was comfortable to drive and when we had to look for new roads north of Nyika National Park, the Landy pulled the trailer through deep dongas and up washed away slopes with absolute ease.

The 2013 Land Rover Defender came with a 2.2l turbo diesel engine. It has permanent four-wheel drive with traction control. It has no differential locks other than the centre diff which can be locked in hi and low range. I left the suspension stock standard for the first couple of years and saw no point in raising its standard ground clearance.

As my kids grew older, we decided to leave the trailer at home, and I started to equip the Landy more purposefully for solo trips. I designed a drawer system which would become our kitchen and clothing storage in the back of the vehicle. Together with gull wings on the sides, this created enough space for everything we needed to carry, including a comprehensive set of recovery gear and tools. We fitted permanent water tanks (35l + 25l) for washing and drinking as well as additional fuel storage that would take the total up to 175l. This afforded me a range of around 1,250km depending on the kind of driving.

For sleeping arrangements, I fitted a rooftop tent and we carried a lightweight six-man ground tent. The normal fold open tents did not impress me since they take longer than a ground tent to set up. I wanted something that I could open when it’s time for bed and close behind me as I get up in the morning. So, we opted for a full-length hard-shell tent which flips open. The particular model was the first generation Alu-Cab tent which was built bomb-proof.

On my first solo trip with the tent, I headed to Zambia to scout Sioma Ngwezi National Park. Driving through the dense forest I hit an overhanging branch which put a big dent into the front of the tent as well as the gull-wing at the back of the vehicle. I stopped to inspect the damage, fearing the tent would not operate properly, but luckily there was only a dent to show for the incident. From there on I knew the exact height of my new setup!

The life of an expedition vehicle

The Landy had to double up as a model for our books and features on the front cover of our Namibia Guide Book. This photo was taken in the Caprivi area, not too far from the Ngoma border. At least once a year I try to bush camp solo and the previous night I’d camped on my own on the banks of the Kwando River in the Mudumu Game Reserve. It is an experience I will always remember. In the morning just as I finished my coffee, a thunderstorm forced me into the vehicle and back on the road.

On other occasions, the Landy took me from town to town as I updated data for our guide books and took pictures of each place. I recall one such trip that was scheduled just before the first father and daughter camp with my grade-7 daughter. For some reason, my timing did not work out so well and I had 10 days to drive from Cape Town and visit each town in Botswana in order to update the book. It was a trip from hell as I had to spend at least 14 hours per day on the road. I pulled into our driveway at noon on the Friday before the camp, hooked up the trailer, grabbed all the groceries for the weekend and the two of us set off to the campsite. The Landy had done well to do the mostly highway runs for 10 days on end and still get me home on time.

The Landy in Zambia

I have been making annual road trips to Zambia for the past nine years. The main reason is to take part in the Elephant Charge event as the navigator for Team AutoWorld. I always combine this trip with some sort of adventure. Many of these overlanding trips were with a good old friend of mine, a staunch Toyota man and driver/captain of Team AutoWorld. As we cannot agree on which vehicle to take, we always end up each driving our own vehicle.

We have done some wonderful trips together and I have seen some really remote parts of Zambia this way. We crossed the Barotse Plains on several occasions, drove up the Machinga Escarpment, went looking for shoebill in Bangweulu Swamps and then there were many fishing trips all over Zambia. My friend always has something to say about the Landy, but on a precious few occasions, I managed to silence him for a day or so by recovering his Toyota out of a predicament. Always good fun around the campfire!

Another solo trip I did was to do research for our Zambia Guide Book. After my usual rendezvous with some Zambian friends, I set off to drive from waterfall to waterfall through the northeast of the country. The distances are long and the roads in some places really bad. As they often say in Zambia, you need a strong car. On one such occasion, the Landy showed me just how strong it is.

It was getting late in the afternoon and I was on my way to camp at the Lumangwe Falls. The road up there was particularly bad but the last 10km it turned into a smooth gravel road. I took full advantage of the road condition, but my joy was short-lived when I spotted a deep rut across the road. It was actually a small stream that had washed away the newly paid gravel. I hit the brakes hard to try and reduce the inevitable impact and just before the stream I released the brakes to allow the suspension to extend.

On impact, all road noise went silent and I had this feeling of weightlessness. The Landy was in the air for a second or two. The emergency lights came on and would not switch off.  I realised that I must have triggered some impact switch and had to stop the vehicle and switch it off to reset the lights. I was convinced something must have bent or broken off.  I checked underneath and rocked the vehicle from side to side but all seemed well. I was happy to retire that day in one piece. The Land Rover is a strong car!

The end of an era

My last big trip with the Landy was along the Wild Coast of South Africa. I’d been invited to join the MegaXplore team on an adventurous trip through the rural areas of the Eastern Cape.  It turned out to be a lot of fun and I will let the videos do the talking. But suffice to say the Landy did me proud amongst the big V8 Land Cruisers.

It was, however, on the way back from the Wild Coast that the Landy decided to blow some oil out of the top gasket. It turned out a valve did not seal due to carbon buildup and that had forced the oil through the gasket. Luckily no further damage was done and we could have it repaired. But for me, that is the end of the road with an engine. On my trips, I cannot afford the luxury of a breakdown. I know the Landy will make its next owner very happy and I will surely miss the confines of its cabin.

Watch the MegaXplore expedition to the Transkei:

Part 1: Setting off on uncharted back roads

Part 3: Recovery is the name of the game