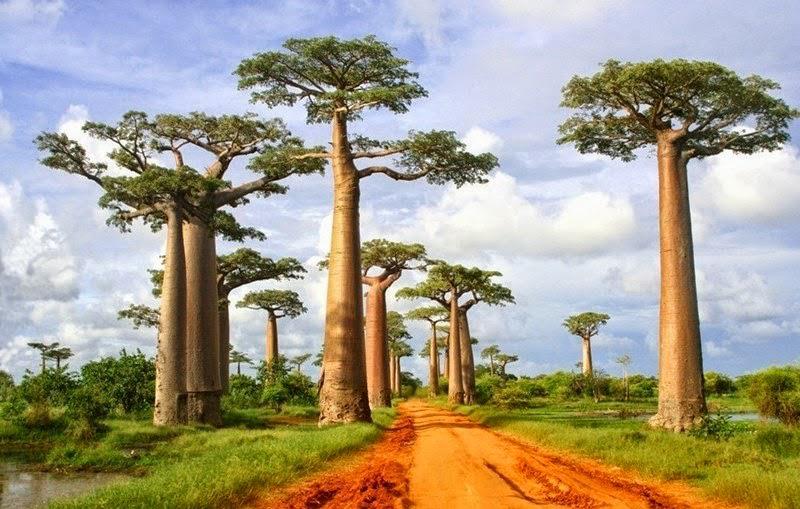 By Ian-Ray Nel (photos sourced from the internet)

Despite the isolation of this Indian Ocean island, also known as the Great Red Island, Madagascar is definitely worth a visit. The numerous sights and activities are dwarfed by Madagascar’s natural beauty and cultural history. The Tracks4Africa map of Madagascar was updated significantly last year and all the places mentioned below feature on the map, plus many more points of interest…

The name Red Island is owing to the colour of the laterite soil which is rich in iron and aluminium and is common to hot and wet tropical areas.  Diverse ecosystems and unique wildlife make Madagascar one of the world’s greatest biodiversity hotspots; over 90 percent of its fauna and flora are found nowhere else in the world.

The island is home to around 170 palm species, three times as many as all of mainland Africa, and 165 of them are endemic. Of the eight species of baobab that exist, six occur only in the drier parts of Madagascar. Additionally, there are 103 species of lemur that have diversified to such an extent as to fill niches that are usually occupied by other animals on the mainland, from those that are as small as rodents to others that rival chimpanzees in size. Over 300 species of birds have been recorded on the island, of which more than 60 percent are endemic. The island is home to two-thirds of the world’s chameleon species including the smallest known, and so the list goes on.

A country like Madagascar deserves a reputation as a top tourist destination and an increase in tourist traffic would ignite the Malagasy to conserve their natural wonders for generations to come. If the island’s unique biodiversity does not convince you to catch the next flight to Madagascar, then maybe some of the tourist attractions will.

Avenue of the Baobabs

One of Madagascar’s main attractions is a gravel road known as the Avenue of the Baobabs. Stretching northwards from Morondava to Belo Tsiribihina, a prominent group of baobabs line the road on both sides, some reaching heights of 30 meters. Locally the trees are known as renala and are protected out of respect. They are a legacy of the great baobab forests that once dominated this landscape, rather than now merely towering over scrubland. The avenue offers a good day trip with some incredible snapshot opportunities. Morondava can be used as your base camp, having a wide range of accommodation types to suit any pocket.

Nosy Be Island off the north-western coast of Madagascar can be reached easily via ferry from Ankify. The island boasts a number of hotels and lodges and many diving schools due to its world-class diving sites, pristine and untouched coral reefs as well as Whale Sharks that frequent these waters. Even if Nosy Be is the only attraction you choose to visit, it will provide you with the full Madagascar experience as you enjoy its unique wildlife in the Lokobe Strict Reserve.

These are karst limestone formations, eroded by rainwater to form a labyrinth of jagged and needle-like rocks. The Tsingy labyrinths are occasionally broken by ‘islands’ of dry forest. These impressive limestone massifs can be seen in the Tsingy de Bemaraha National Park. The park has a good hiking infrastructure of easy trails with several hanging bridges passing through the limestone forest. Also, 85% of its species are endemic and visitors can spot eleven lemur species and more than 100 bird species.

In Madagascar very few roads are tarred and many destinations can only be reached by traversing wild countryside with a 4WD vehicle.  If you hire a 4WD vehicle, chances are that the rental company will supply you with their own driver as this is generally a prerequisite. However, this should not deter you as these drivers are usually able to speak English fairly well and also act as tour guides. They are well schooled in the history and natural assets of their country, and can also inform you of the cultural taboos. Having African and Asian origins, the Malagasy society is rich in culture and many rural inhabitants are very conservative. If you do decide to negotiate the rough back roads of rural Madagascar, you will be rewarded with awesome sights.

If you expect a typical island holiday with white beaches, Madagascar won’t disappoint you. Popular beach destinations are, amongst others, Morondava, Mahajanga, Antsiranana, and Maroantsetra. The latter is particularly beautiful as it is situated on the east coast where tropical rainforests extend right up to the coastline. From Maroantsetra you can reach the adjacent Masoala National Park by boat.  Although access to Maroantsetra is mainly by air, you can reach the town via a forest track from the south, which can be inaccessible, however, depending on the season. At various points ferries are the only way to cross the rivers.

Situated about twenty kilometres north-east of Madagascar’s capital, Antananarivo, is the Royal Hill of Ambohimanga which is a significant symbol of the cultural identity of the Malagasy people. It was once home to Malagasy royalty and the wall that surrounds the palace was constructed with lime and egg whites. Royal Hill rises steeply above the surrounding landscape to the east and then gradually slopes down to the west. This position made it an excellent vantage point for scouting the surrounding land to detect advancing enemy troops. The entrance to the palace is protected by a traditional stone disc which takes 40 men to move into position.

In the past the nearby Soavinandriamanitra was used by King Andrianampoinimerina as a place of refuge before he took power and later Queen Ranavalona I used the location to store gunpowder. The site is protected by three circular walls of laterite brick stones, but in recent times a local initiative has transformed the site into an ecotourism park where different kinds of animals can be observed.

Various airways offer regular flights from Europe, Nairobi and Johannesburg. Unfortunately flights aren’t inexpensive, but if you are flexible with your dates and use frequent flyer miles, you can get affordable flights.

With all this on offer, Madagascar should definitely be on your travel agenda.

5 thoughts on “Discover the best of Madagascar”