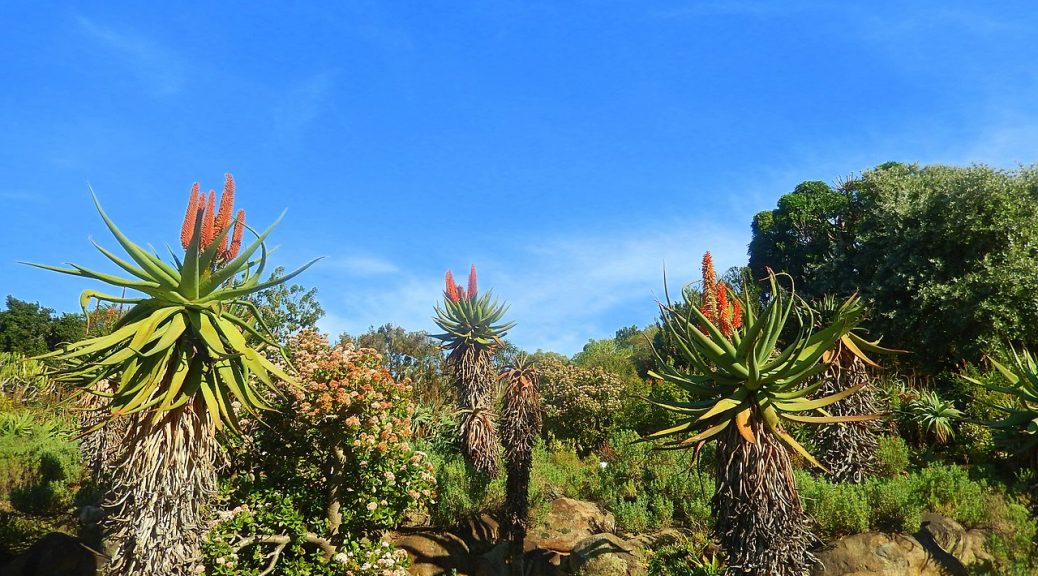 Like floral firebrands, aloes light up the winter months with their bright blooms. A scenic drive will give you the chance to admire their flame-coloured flowers.

The beauty of overlanding is that you can see the landscape change through your vehicle windows. Sometimes it’s a gradual shading from one habitat to another. At other times, the sudden appearance of an iconic tree will let you know you’re heading into new territory. Whose heart doesn’t leap at the sight of the first baobab on the road north? So, too, with aloes. Because these succulents favour craggy kloofs and rocky ridges, their appearance is confirmation that you’re leaving the city behind. Their bright blooms are like lanterns lighting your way, a promise that adventure awaits.

A drive to see (and photograph!) aloes in bloom is a widely available pleasure since aloes occur all over South Africa. You can find them from the Cape Peninsula and the country’s arid west all the way through to the grasslands and savanna of the eastern parts. While some types are widespread, like the krantz aloe found along much of our coastline, the majority of aloes have a fairly specific habitat.

Aloes can be tall or small, bushy and low to the ground or elegant and impressive trees. Their clustered flowers can resemble pom-poms, brushes, candles or pineapples, typically in hues of vivid red, orange and yellow. Succulent expert Ernst van Jaarsveld describes aloes as sculptural accents that adorn the natural landscape. And that’s where they belong. While you’re free to go aloe hunting with your eyes and camera, bear in mind that these plants are protected by law. If you want one for your garden, best buy from a reputable nursery.

In the Western Cape

Conveniently situated along the N2 you will find Swellendam and Bontebok National Park. Here the 3.3km Aloe Hill Trail is an ideal opportunity to stretch your legs and admire the plants up close. Follow the clear path among an abundance of aloes to a viewpoint overlooking the Breede River and rest camp. Framed by aloes in flower, the scene is idyllic. From Swellendam head to Bonnievale via the Stormsvlei Poort Pass. As the road winds deeper into the valleys, you’ll come across masses of aloes against the rocky slopes, their bright red flowers popping against the brown rock. Bonnievale itself is the home of a tonic made from the sap of the bitter aloe. The back roads that lead from Bonnievale past McGregor to Robertson are among the most scenic you’ll find.

In the Eastern Cape

This province is synonymous with aloes, one is even featured on its number plates! A day trip to see the region’s aloes should first head to Addo Elephant National Park, where coral aloes dangle their pinky-red bell-shaped flowers. A drive through the park will turn up not just aloes, but also sightings of big game and especially loads of warthogs. Depending on your appetite for driving, you could do a loop through Jansenville, Somerset East and Cookhouse, all known for their aloe displays. Another option is to choose one of the back roads leading to Grahamstown (Makhanda), where the surrounds are aflame with bitter aloes (Aloe ferox). On the way back to PE, the route via Port Alfred and the coast is particularly scenic.

Did you know? Aloe ferox is one of the few plants to appear in San rock art.

The atmospherically named Skurweberg lies between Johannesburg and Pretoria, its rocky ridges prime real estate for aloes. The road to Pelindaba, the R511, is a ribbon of tar that wends its way past the Hennops River and aloe-studded slopes. Just beyond lies the Magaliesberg, home to the endangered Aloe peglerae. Also known as the fez aloe, this stemless red flower on its round base calls up images of the felt hat perched on a head. You can take an extended drive around the Magaliesberg on country lanes or skirt Hartbeespoort Dam for a shorter circuit. Driving through the tunnel at the dam gives you the sensation of entering into a new world, the big smoke left in your dust.

Over to you: Have you jumped in the car to go looking at aloes, snow, wildflowers? What is your favourite excuse for a scenic drive?