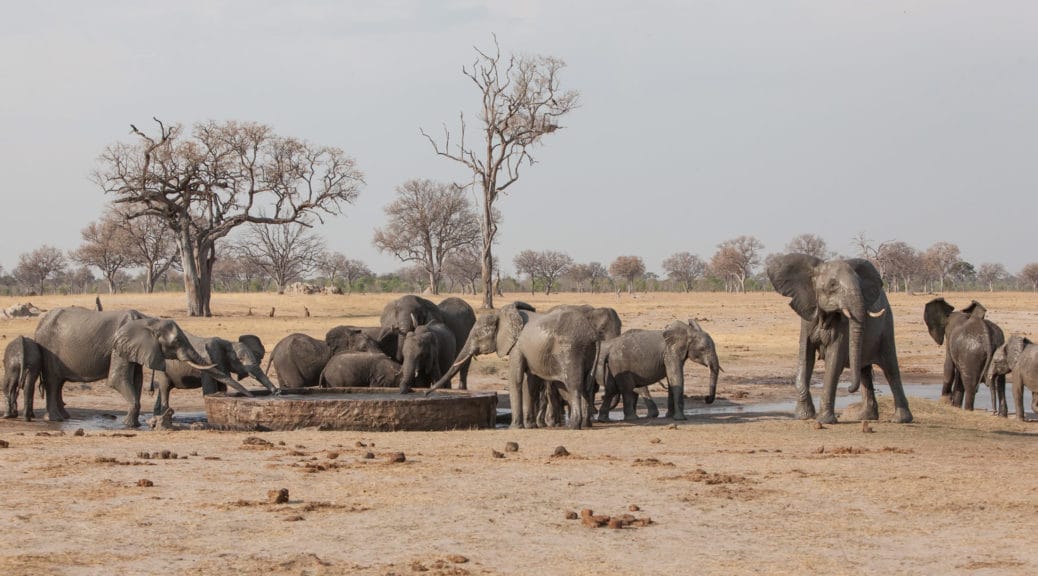 Zimbabwe’s Hwange National Park is famous for its elephants, with tens of thousands moving through the reserve each year. 23466 were recorded in 2018’s 24-hour game count, a fascinating long-term study that wouldn’t be possible without the enormous behind-the-scenes efforts of a range of conservation groups, plus a host of dedicated volunteers. Words and photos by Chris Davies

Every year in late September / early October hundreds of volunteer wildlife enthusiasts gather in Zimbabwe’s Hwange National Park. The event is timed to coincide with the last full moon of the dry season – specifically the full moon because they’re there to count game. Divided into small teams they stake out the waterholes, diligently recording the many comings and goings. For 24 hours, from noon ‘til noon the next day, they stick by their notepads and watch the wilds amble by.

The annual Hwange Game Count is now in its 49th year and this year the 295 participants covered 91 major waterholes. There are at least 259 pans and waterholes across Hwange, but with such a huge area, and the teams already stretched, it’s impossible to cover them all. For the most part, however, the same main pans are surveyed, in what is the longest-running, continuous game count ever undertaken Southern Africa.

It’s been a good year for water in Hwange National Park, a notoriously arid region that relies on man-made pumps to survive. Some 60 or so diesel pumps have been used in the past, but increasingly these are being converted to solar. About 50 solar pumps are currently in operation, reducing the reliance on expensive (and often hard to obtain) fuel, reducing pollution and returning some silence back to the bush. Pumps of whatever kind are expensive, however, and as with the game count they couldn’t continue without the work done by volunteers.

The main agencies involved are Wildlife and Environment Zimbabwe (WEZ), Zimbabwe Parks and Wildlife Management Authority, Wilderness Safaris, the Water for Hwange Project (WFH) and the Friends of Hwange Trust (FOH). WEZ coordinates the game count and organises the volunteers, compiling a detailed, 130-plus page document on the census each year.

FOH work with WEZ, WFH and the parks’ authority on solar pump installation, helping maintain roads and fire-breaks, rescuing animals injured by snares, and perhaps most importantly, assisting adjacent communities with medical supplies and the supply of water to schools and clinics. They also keep a close eye on Cecil the lion’s old pride and generally do an amazing job promoting and developing the area.

All of this work is done out of sheer love for the region and it’s hard to imagine how the park would survive without the combined efforts of these dedicated groups. This year the numbers look more or less the same as last, with the elis down a just a couple hundred (23466 vs 23681), while leopard and lion were up (4 to 6 and 91 to 105 respectively). These numbers are not statistically relevant, considering the many variables involved in such a short fixed-time census, but still buffalo were up over 1000 individuals (4369 to 5371) and it was good to see the return of the caracal which hadn’t been spotted since 2013.

One major concern is the decline in giraffe. While most of Hwange’s other species are stable, giraffe numbers have dropped 40% since 2001, a worrying trend that matches statistics worldwide. On the plus side, 2018 saw a welcome reduction in snare injuries – 3 elephants injured out of nearly 23-and-a-half thousand counted.

In 24 hours, 44 of Hwange’s 111 mammal species were jotted down, as well as 212 species of birds. With a total of 39317 individual mammals recorded, there’s certainly plenty of hard work involved, but there’s no doubt that volunteering to help in the count is a wonderfully rewarding way to spend a bush holiday.

How you can help the Hwange Game Count

The 2019 Hwange Game Count is scheduled for 12 to 15 October and new counting teams are always welcome. All accommodation is block booked throughout the park for the duration, so the volunteer teams have the whole park to themselves. Participants must be WEZ members – which just means a small fee to join – and you’ll need to pay for your camping or chalet, although there’s 50% discount on the park entry fees. There’s also a $50 entry/conservation fee which covers general organisation costs and a donation to the Hwange Water Project. Pam Birch is the local coordinator – feel free to email Pam with any questions. 2019 is bound to be a special event, celebrating the census’s 50th year!

More broadly, the Friends of Hwange Trust are also always grateful for donations. Their fundraising event – the ‘Tour de Hwange’ – sells out far in advance each year. The 2019 tour is set for the last week of April (and already fully booked), a two-day mountain bike ride through the Robins Camp area in the northwest. If you’re interested then you’ll need to get your 2020 registration in now, otherwise donations are always welcome via their website.

Otherwise, as ever, a great way to support is simply to visit. Zimbabwe is still a wonderful destination for self-drive visitors.

For first time visitors to Hwange

Dave Dell at Friends of Hwange recommends Robins Camp, which has great facilities – both chalets and camping. The animals are also good in the northwest of the park, especially later in the year. The best wildlife, however, is in the Kennedy / Ngweshla area, south of Main Camp. Camping and chalets are available in the park’s three main rest camps: Main Camp, Sinamatella and Robins Camp. There are also a number of exclusive campsites/picnic sites scattered throughout the park which are private at night although the ablutions are open to everyone during the day.

One thought on “Update from the 2018 Hwange Game Count”