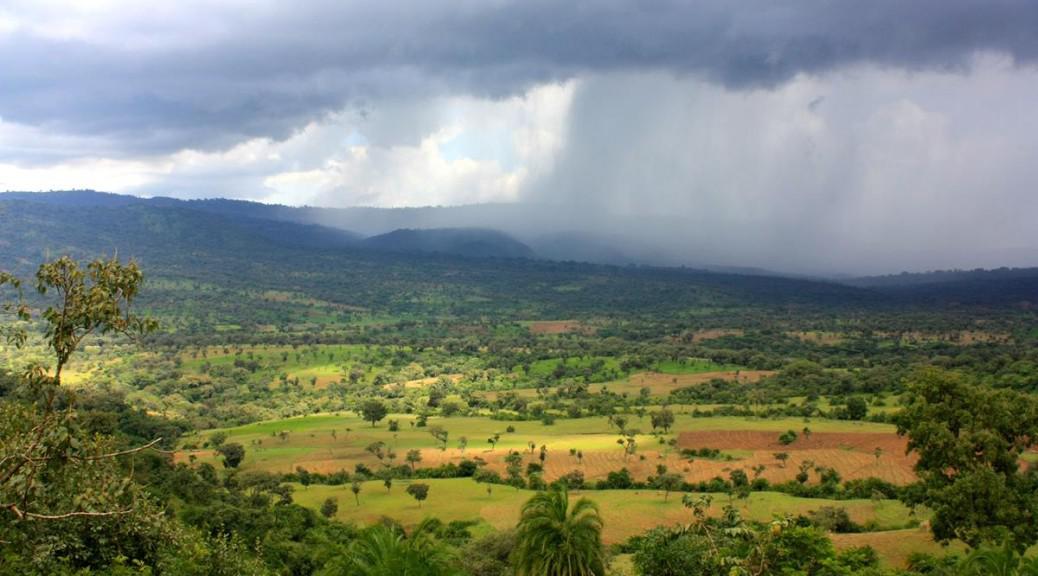 To his dismay the monks chastised him for his evil stimulants and threw the berries into a fire, only to be encouraged to try them because of their aroma. Finding that they were unusually alert during nightly prayers, it became practise throughout Christian Ethiopia to chew coffee beans before lengthy prayer sessions. Later it was discovered that the roasted berries could be pounded to a powder to produce what we know as coffee. By Karin Theron

Coffee probably remained an Ethiopian secret until the 16th century, when it was traded along the Indian spice route and cultivated in parts of Arabia.

So it was that we headed south from Bahir Dar to pass through the Western Highlands and the Kaffa region where coffee originated.

On the way south we passed through extensive farmlands, cultivated mostly with rice and maize. It was an unusually clear day; one of the few we have enjoyed on the highlands. We dropped from 2,500m to 840m as we crossed the Blue Nile River, its valley beautiful with unspoilt virgin bush.

Descending the switchbacks down some uninhabited high ground we spotted a quarry from above and upon driving in, found a secluded spot next to a bamboo forest. Miraculously we were undiscovered and enjoyed the peace, only realising the next morning that we were actually on a pathway to the main road. Most passers-by got such a shock when they saw our camp that they just hastened by!

Towards Bonga we entered the Western Highlands which are just as beautiful as those in the north but with smoother hills and less dramatic contours. Uniquely around Bonga, patches of natural forest exist between the lush, green farmlands.

We specifically wanted to visit the Kaffa region, where the Arabica strain of coffee originated between the third and tenth centuries. Coffee is as integral part of the Ethiopian culture as braaivleis (barbeque) is to South Africa. Here they don’t simply make coffee; but serve it in ceremony. The greenish raw coffee beans are freshly roasted on a little charcoal burner, then pounded in a pestle and mortar before being boiled in a special clay coffee pot. The occasion consists of three cups of which the first is the strongest.

Coffee export accounts for 70% of Ethiopia’s annual foreign revenue, 90% of which is grown on subsistence farms and smallholdings. So it’s not surprising that we haven’t seen any formal coffee plantations here. Being pressed for time we chose not to do a guided tour of the Kaffa Biosphere Reserve, rather hoping to find some of the original wild coffee bushes in the subtropical moist forests ourselves.

Getting stuck in the mud

With no T4A track, we followed Open Source Maps on the Tablet and our illustrated tourist map, intending to drive due south from Bonga. Passing through substantial virgin forested areas, we were disappointed to see banana trees on the side of the road and no coffee bushes. Gradually the mountainous road got worse and relentlessly veered east rather than south.

Limited interaction with the locals assured us that we were on the right road for our destination to the south, but we finally realised that we had no choice but to head off course, east for Chida, where we hoped to link up with a road running south.

In spite of the rainy season, the road was reasonable and now, deep in the mountains, passing through Felike Salaam our only option was to go further east towards Chida, on a road that was apparently passable. Various people confirmed this, although one indicated that we would have some challenges.

Rounding a corner a monster truck was pulled off to the side, apparently stuck, but not wishing to lose momentum on the hill we sped up as we saw a very sticky patch ahead. We made it about two thirds of the way up the left when, with wheels spinning, about 3,000kg of vehicle came to a standstill, left side high.

A large party of men was passing and they kindly lent their efforts, using machetes to cut branches and place them in the track.

After several failed attempts we broke the seals on our as yet unused recovery gear and attached 30 metres of rope to the bull bar. Then, as Pete revved the engine, 20 odd men began singing and heaving, followed by a great cheer as we made it through, wheels spinning and mud flying.

Encouraged by our success, we pressed on, knowing that we could make it back down that stretch if we had to. Now descending, we assessed each gnarly section to ensure we could climb back up should we need to. We were mindful of our isolation, the total improbability of a suitable recovery vehicle being in the area and should one be available, the zero likelihood of it making it up the section that we had just reduced to slush.

Optimism ruled however, as everyone had said that the road was passable, and we advanced cautiously down into the valley, praying that we wouldn’t have to return.

A mere seven or so kilometre down the road we were shocked to a standstill. The road was completely washed out, about three metres deep and 10 metres across!  Hearts in our mouths, we knew that there was only one way out!

We turned, knowing that the worst section was some way off, but nevertheless approached the first steepish obstacle of slippery rock and mud with trepidation. That surface was very washed out and aiming for the smoothest run on the left, the vehicle made it about half way up and stopped. Pete tried to reverse back for another try but after a few metres the wheels slipped sideways into ruts and locked up on large rocks. The inclined road surface was so slippery that even walking on it was almost impossible.

Pete jacked up the vehicle, placed rocks under the wheels and some local folks dug out under the spare wheel (low slung under the long range fuel tank). We managed to reverse a little further down but were unable to steer out of the deep rut.

Now, with the left of the vehicle body just 10 mm from a large rock at mid door height it seemed improbable that it wouldn’t be damaged. Pete filled the deep gully behind with rocks and with the rope now hitched at the rear, about 15 men pulled us back while three men did their best to push the canopy to the right. We managed to inch the vehicle back and to the right without a scratch to the body work! It was once again hair raising to see the men pulling together while they hummed a deep rhythm.

That was half the job done. We still had to get up successfully. This time Pete chose a line to the right, intending to swing left near the top. With good speed he hit the 25 metre obstacle, wheels immediately spinning and the bakkie bouncing madly, up and down and left to right, slithering its way up.

As he neared the top the front swung to the left as planned, the rear refused to follow and the vehicle crawled its way up, about 25 degrees off-line. To all it seemed that we wouldn’t make it, but Pete modulated the power, keeping the wheels turning, but not racing. By a miracle the truck slowly clawed its way clear, to huge cheers from the crowd.

A litre of Ethiopian gin for the masses to share and the distribution of a few hundred birr to the stalwarts saw us all part happily, although we knew that we were not yet out of the woods…