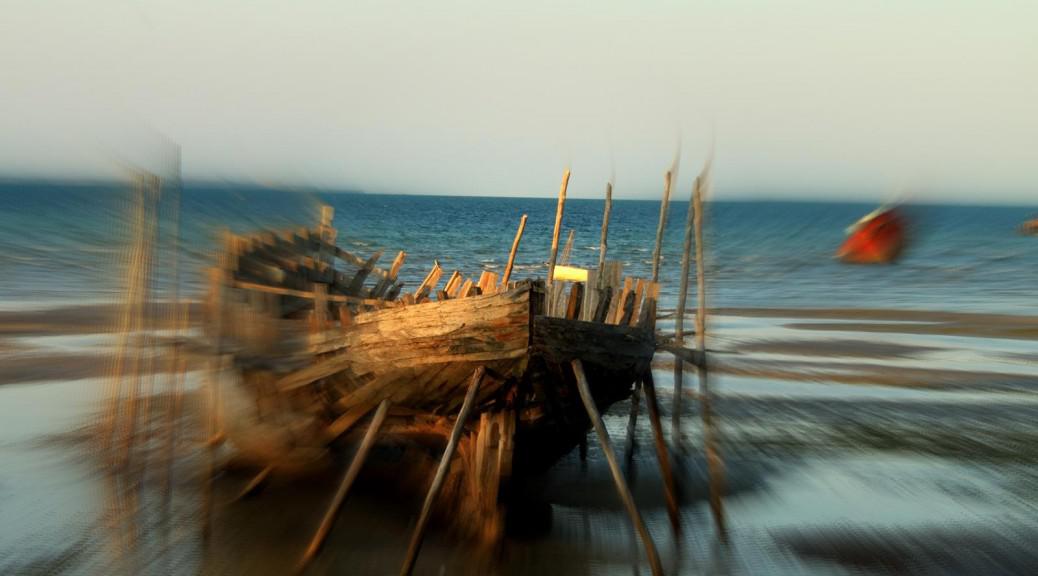 Heading north from Zavora involved us in a long and rather frustrating day. At first we decided to head for Inhassoro and possibly get across to the Bazaruto Island group, but as we travelled we decided instead to head for Vilanculos which was closer and where, from the GPS, there appeared to be adequate, secure camping facilities. This was particularly important as we had conflicting reports about the town, some praising its uniqueness and others referring to it as Villain-culos, because of thievery.

We passed the Tropic of Capricorn, travelling in a lush green landscape dotted with coconut palms, under which stood neat reed houses. Around Massinga we passed through an area where beautifully shaped, small silver corrugated iron houses appeared, with their frontal façades cut out to form columns. Then our first baobab trees of the journey appeared, beautiful in full leaf.

We shopped, re-fuelled and withdrew money in Maxixe – never a particularly pleasant and always time consuming activity. Whilst ATMs are common, those that take the type of cards that travellers from South Africa use weren’t that abundant. From experience Standard Bank, FNB and BCI Bank ATMs work well in Mozambique. Visa is the best card option to have but even this isn’t accepted by all cash machines. We were reminded that it’s important to have at least two different card options to fall back on.

Our admin done for the day, we were back on the road again passing by hundreds of vendors who were manning their stalls. Produce types tend to be grouped in an area; stone and rock here, pestles and mortars there. So it was for cashew nuts, preserves, wood for construction, wood for fuel, vehicle fuel, honey, coconuts and vegetables, including the best bananas and avocados we have ever tasted. With so much of the same on offer in one area we expected stiff competition between the traders but their already modest prices appeared to be quite inflexible. Our impression was that the rural economy largely depends on this informal trading.

We reached the outskirts of Vilanculos and headed south through thick sand for Bluewater Bay, resisting the offer of an 8kg Spanish Mackerel on sale at the side of the road, as we had bought a fresh 4kg Reef Fish at Zavora. We had prepared this into meal sized portions, some destined for dinner and some for our freezer.

Bluewater Bay was closed to the public so we headed with some misgivings, because of overnight security concerns, towards the town centre searching for camping options. The next campsite was closed down. The shadows were beginning to lengthen and the road was atrocious and slow.

Earlier we had stopped a passing Landrover whose driver had recommended that we try Samara Lodge and said that they offered camping.   Reaching it we were greeted by Paulo who told us they didn’t cater for campers and that it was likely that we would get ripped off at the one available campsite in Vilanculos. Worried on our behalf, he very kindly offered to put us up in one of the bungalows for free; however we opted for the use of one of the bathrooms and our airy rooftop tent, as it was hot and humid.   To thank Paulo for his hospitality we enjoyed a tasty calamari dinner with a bottle of Graqa wine at his restaurant and we were surprised that Radio Maputo broadcasted music from our youth and the talk show host still refers to it as LM Radio after all these years. It brought back good memories…. 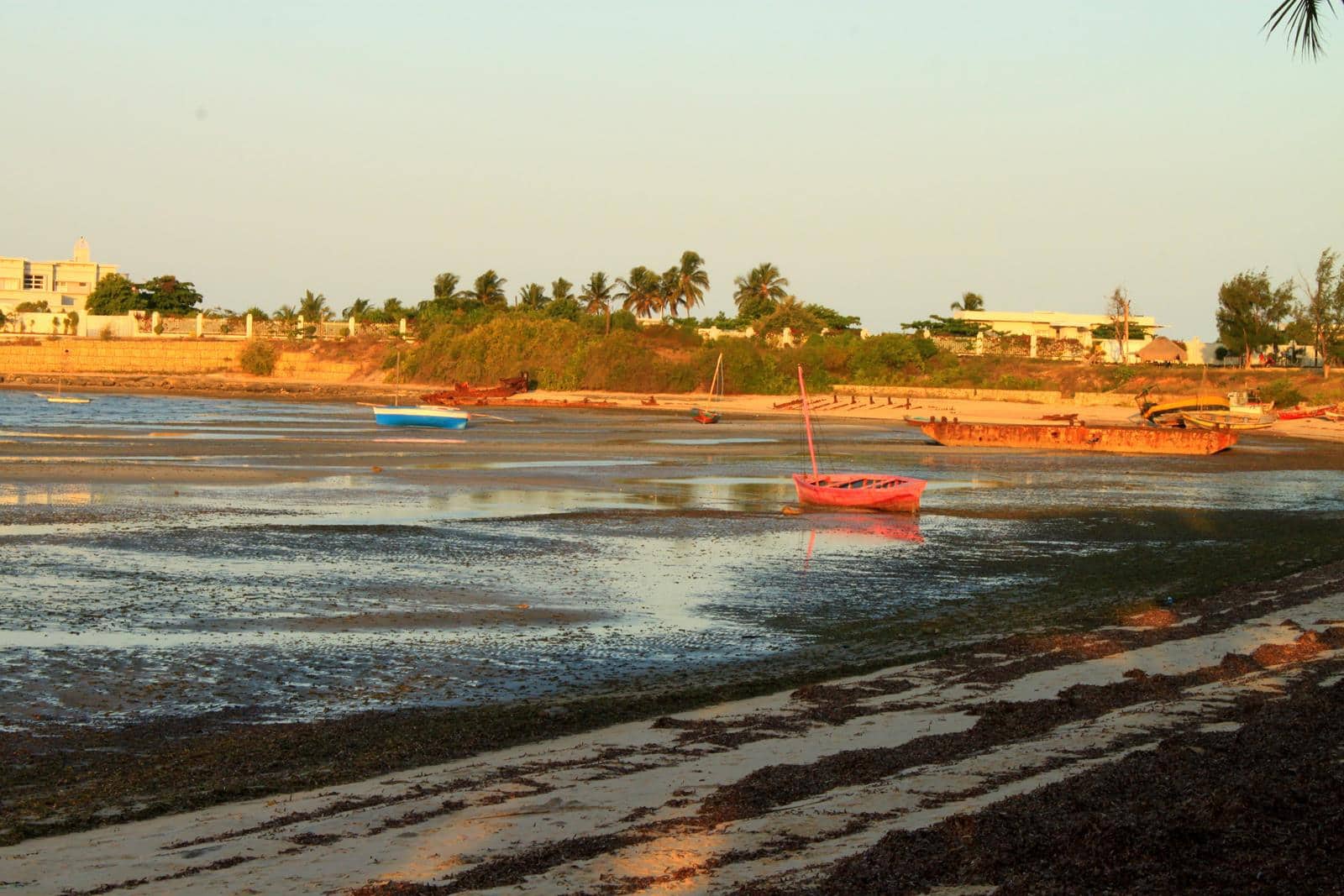 For that stretch of coast, Vilanculos is indeed quite unique as there is no surf, because of shelter from the large islands and the calm waters permit many small fishing boats to moor offshore in the bay. It also has a vibrant African atmosphere.   Largely because of the lack of a ‘home base’ where we could leave the vehicle and not wishing to impose of Paulo’s good nature for another night, we elected to abandon island travel plans and move inland towards the Moribani Forest Reserve, near the Zimbabwean border.

Leaving Vilanculos we rejoined the EN1 to experience bad potholes until shortly after we passed the Save River. Strangely this bridge was built skew by the Portuguese and looking along it shows how the level changes as each section rises or falls to join with the next. The road improved shortly afterwards, being dotted with burnt out vehicle shells, relics of the recent Renamo/Frelimo convoy conflict, happily now resolved.

From the EN1 to Dombe the road is excellent gravel and we were able to fill up our 10 liter jerry can with water from a well at a fuel station in case of a bush camp that night.

This didn’t eventuate as our route turned onto fast, new tar, running from Espungabera to Chimoio. With the towering blue skyline of the Chimanimani Mountains to the west, we entered an extensive hilly area of verdant Afromontane forest with many large hardwood trees soaring skywards, often draped with thick creepers and small clearings clustered with cultivated banana trees. Not surprisingly this region includes the country’s highest point, Tsetsserra, part of the Chimanimani range.

Our first night in a month away from the sound of the ocean was spent instead with a brisk breeze rustling the high, leafy canopy overhead the Moribani Ndzou Camp. We were both tired. Travelling like this involves more or less non-stop activity and it was luxurious to doze late, catch the early morning sun which peeped through the trees and drift off to sleep again.

We had arranged for guides to take us on a walk to see a natural bridge and a place sacred to local people. To reach the sacred area we had to walk for about a kilometre on the hot tar road and then for a few metres through thick bush. At a clearing we took off our shoes, sat and deferentially waited for the two guides to pay respects to the ancestors. This short ritual involved hand clapping and then the lead guide, who was short in stature and reminded us of a Pigmy, placed some powder on a leaf, intoned a rhyme and then took some of the powder as he would take snuff. After the ritual we proceeded to a large rock face with a breathtaking vista over the green valleys below.

The ‘Pigmy’ left us as once back on the main road, from whence we trudged to the natural bridge. Disappointingly it seemed to be nothing more than a dip in the road with railings, surrounded by dense growth on either side.   However, by coincidence the mother, father and sisters of the governor of this Manica province had also stopped to view the spectacle, and the old lady stepped forward to greet us, being exceptionally friendly. Several photos of us as a group were taken and then they went on their way. It was only when we asked our guide why there was no water running under the bridge that the penny dropped. He explained that the water flowed in both directions from there; the ‘natural bridge’ was what we would call a watershed.

At last we got what we were looking forward to; a guided walk through the beautiful forest! The Moribani Forest Reserve is the larges swath of low to mid-altitude rainforest in Southern Africa. It is also home to the region’s only elephant population. (Ndzou means elephant in the local language.) We weren’t lucky enough to meet any of these giants, but we did see a variety of stately trees, some close to 50 metres tall whose roots are reminiscent of dinosaur claws, and an assortment of colourful butterflies.

Apparently the region had extraordinary good rains in April; this was evident in the lush green hilly countryside which we passed through on the excellent new tar road to the Espungabera border crossing into Zimbabwe.

After hearing many negative stories about the bad roads and the bribery on various internet forums over the last few years, we were a bit apprehensive about travelling Mozambique. Certainly, we did encounter bad roads but none of them were impassable. We were stopped six times by traffic officers but never asked for a bribe. They were always friendly and polite and we got the impression that they were just doing their jobs. Maybe we were just lucky not be harassed but it’s probable that we got off scott free because we abided by the traffic laws.   Ironically the only time we were asked for a bribe in Mozambique was by the armed gate guard at the Espungabera border post.  He diffidently asked for 100 US$ and when we refused, reduced that to 50 US$, and upon further refusal, waved us through. We left Mozambique with a warm feeling and looking forward to exploring the north of this beautiful country at a later stage on the trip…

We have been in the Zimbabwe for the last week but have been battling to get local sim cards and good enough connection to post this blog, therefore the post is a bit overdue. In the next blog we’ll share the magic of the Chimanimani National Park on the eastern highlands of Zimbabwe with you.