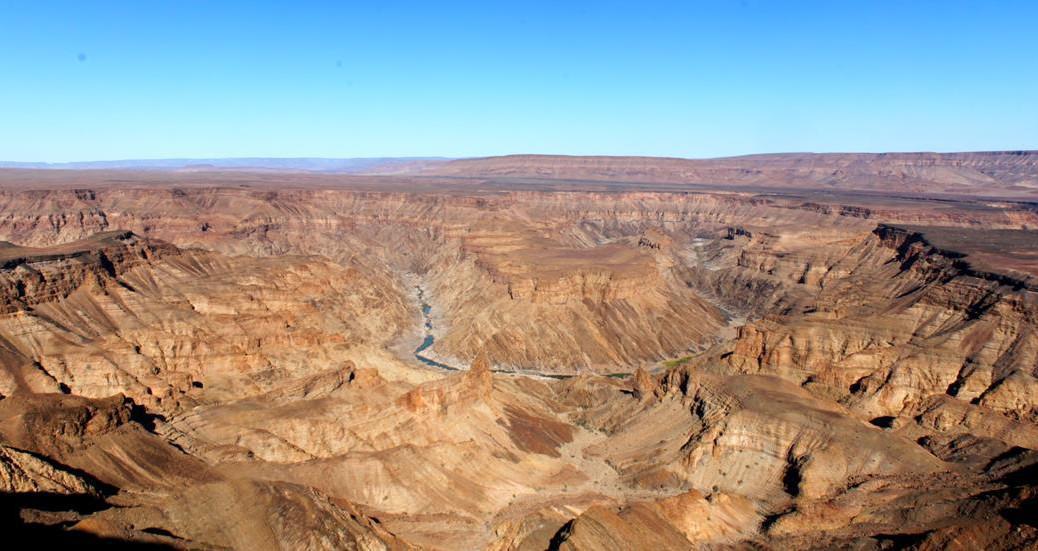 We entered Namibia at Katima Mulilo and it was noticeable how many overland vehicles there were; far more than what we had seen in any other country. Indeed the further north we were, the fewer we saw; in Ethiopia not a single one!

We camped for three nights at Namwi Lodge on the bank of a side stream of the Zambezi River.  The 40 plus degrees Celsius was almost unbearable, but for the swimming pool and silver reflector awning that Pete rigged up. Thanks to that I managed to get some computer work done while he temporarily repaired a small leak in our long range fuel tank, also discovering that the rear right air suspension was irreparably smashed. By Karin Theron

We had intended to travel west through Koakoland but the uncomfortable heat and the prospect of swarms of infuriating tiny Mopani flies (midges) swarming around got us thinking.  The damage to the suspension and the promise of visiting the Marienfluss and Epupa Falls next year after the rains made us decide to opt  for the cooler West Coast of South Africa.

Traversing the Caprivi westwards we stayed over on the Okavango River at Ngepi Camp, renowned for its humorous signs and good facilities. Their open-air ablutions afford one a view of hippos, elephant, impala and buffalo while you occupy “The Throne” or recline in the “Fish Eagle Bath”.  The Bwabwata National Park is on the opposite bank of the river and that night we heard lion roaring and snarling close-by.

The next morning we indulged ourselves, spending a few hours watching the variety of birds in the trees under which we camped.  Apart from Rüppell’s parrots who feasted on pods we also saw paradise flycatchers, blackcollared barbets, eastern blackheaded orioles, Mevese longtailed starlings, grey loeries and black-faced babblers.

Thanks to Namibia’s good roads the moving average speed for the entire 33 000km trip went up from 42.7km/h to over 43km/h. About 50km north of Grootfontein we stayed over at Roy’s Camp which offers lodging as well as camping and being situated on a game farm, we were pleasantly surprised by sable, zebra, wildebeest, and duiker passing by our camp while we had dinner. A few spring hares also arrived later to feast on our patch of green grass in the otherwise dry veld.

Driving south we enjoyed the vast openness of the countryside, accentuated by the wide verges next to the road, making use of the unique Namibian lay-by’s;  cement tables and seats either under a big shady tree or a thatch roof.

Fellow African travellers, Fanie and Ilva Rossouw, with whom we had become friends through the blog, invited us to dinner in Windhoek where we traded stories.  They had done a similar trip in 2013, so we had lots to chat about.

At Keetmanshoop we turned west towards Seeheim and then south towards the Fish River Canyon. We were once again surprised by Namibia’s excellent gravel roads as we turned onto the C12, taking us then past the Naute Dam which irrigates date palms and vineyards in this otherwise dry countryside.

As we headed south, mountains shaded with yellow, red and brown rose like gigantic cakes from the yellow grass plains and we delighted in the remote open spaces typical of Namibia.

Passing by the unique Canon Roadhouse shortly before the turn off to the Fish River Canyon, we simply had to stop for an ice-cold drink and once again enjoy the display of vintage vehicles and other memorabilia.

For us the Fish River Canyon is one of the most spectacular sights in Africa.  Apparently its formation started about 350 million years ago but the river itself now runs in a bed 1,5 million years old. A geologist’s paradise, its walls display a clear record of much of the geological history of the region. It is unfathomable that today’s canyon once used to be the huge Namaqualand Mountains which were eroded to a vast plain, then became the Nama Sea when continental drift caused an ocean trough. It took millions of years to completely fill the Nama Sea with sediment which was transformed into hard metamorphic rock by heat and pressure. It was only much later that erosion started playing its part in creating the canyon. (Info from the Visitor’s Centre at the viewpoint.)

Up early the next morning, we enjoyed the canyon views as they were lit up by the sun and upon heading towards Sendelingsdrift we were astounded by the display of colours: green shrubs contrasted with red rocky outcrops and blue mountains in the distance.

Although the water level of the Gariep (Orange) River was extremely low now, we enjoyed driving next to it as it is renowned for its river rafting.

At Sendelingsdrift we crossed the 97m wide Gariep/Orange River on the pontoon which has been in operation for 43 years.

On the South African side of the Transfrontier Park we traversed the timeless landscape of the Richtersveld with its clear blue skies.

From the Richtersveld we headed for Kleinsee where, having been too hot in the Caprivi, we were now chilly under the veil of Atlantic fog as we camped at Die Houthoop farm. The next day we continued south through the diamond diggings towards Koiingnaas where we turned west to traverse the Namakwa National Park with its beautiful fynbos and undulating hills. The road became disused and washed out, giving our impoverished suspension its last test in low range.

We spent the last night on the banks of the Clanwilliam Dam, enjoying our final sundowner as we reminisced over our amazing adventure, grateful that all roads, tracks and footpaths eventually led home and that the Hilux never missed a beat.

On the last leg the next day it was good to see the beautiful Boland mountains and vineyards, the latter neat and manicured.

However, we were somehow sad to leave behind Africa’s simplicity and its ‘realness’ as we contemplated settling back into first world ways. In stark contrast with Africa to the north, we immediately noticed the glamour, glitz and over indulgence, as reflected in our cities, shopping centres and in what we eat, wear, live in and drive. Perhaps the huge class disparity in South Africa is particularly unsettling; we hadn’t seen this big a gap between the rich and the poor in our travels.

At the outset of the trip we wondered how it would change us. Amongst other things, it has certainly given us fresh perspective on the society we live in and we cannot help but wonder why we who have so much, still find reason to complain about so many things.

17 thoughts on “Namibia and back home”