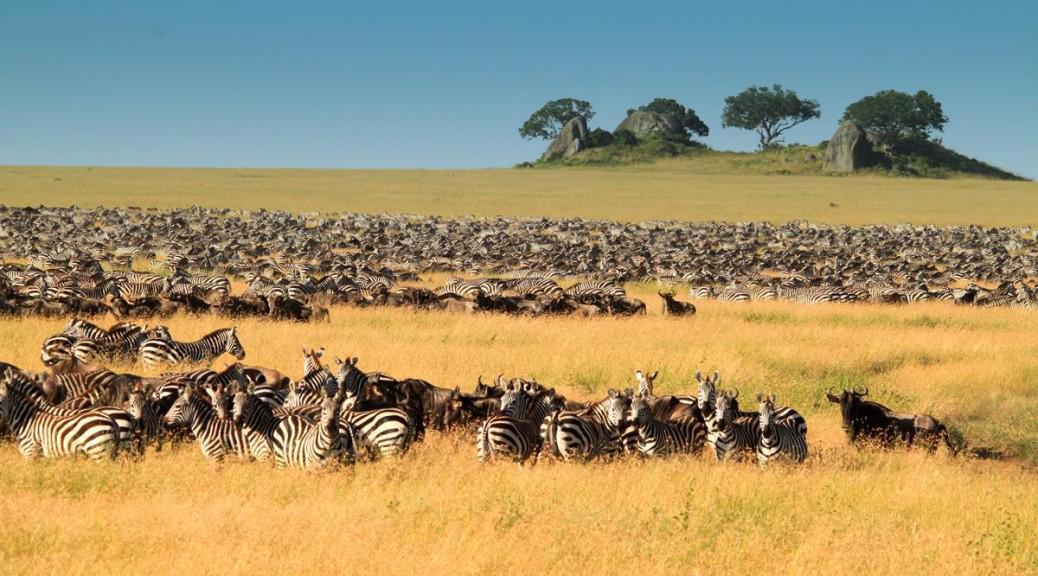 We awoke to soft drizzle on the rooftop tent at Irente Farm in the Usambara Mountains. While we had coffee and breakfast it started pouring and we broke camp in the wet and cold prior to a long day’s drive to Arusha.

A new tar road took us about halfway in the rain to Same and from there the clouds started lifting and, now on the old road which was reasonable, the country became drier as we drove north passing large sisal fields and a brightly coloured patch of cultivated flowers.

Nearing Moshe, Kilimanjaro, Africa’s highest mountain, was well hidden in the clouds, as it apparently is for a large part of the year.   However, we were fortunate to get a clear view of the rugged volcanic summit of its small sister, Mount Meru, topping out at 4500m, from our nearby campsite in Arusha.

We camped nearby the gate and were up before first light to be there when it opened at 06:00. We weren’t surprised to find a queue of vehicles already waiting to enter. Entry procedures weren’t that clear or efficient and I had to re-join the queue once again after discovering that I had not completed the required form.

Despite the fame of the Ngorongoro Crater we were still taken aback. From the gate we entered a verdant, impenetrable jungle with tall trees, creepers and dense shrubbery. To our surprise the road rose steeply, up and up the slopes of the crater, eventually nearly reaching the 2 300m contour. As we rose we entered the mist blown in by a south-westerly breeze and the temperature plummeted.

Not far from the gate and once on the rim of the crater we reached the best viewpoint; an area that has been cleared of the dense forest that surrounds the crater lip. We only momentarily glimpsed the spectacle through the thick mist, but the little we saw convinced us to put on all our warm and wet weather gear, have coffee and breakfast and wait a few hours for it to clear.

This is the largest unbroken volcanic crater in the world whose steep walls rise 600m above its green, grassy plains, a salt lake and the waterways which run through it. The opposite side was just visible in the hazy far distance.  Using binoculars from the viewpoint we could see some larger animals on the crater floor. According to fellow travellers there are massive herds of game to be seen if one is prepared to pay the additional daily US $200 to drive your vehicle down; this on top of the already exorbitant Ngorongoro and Serengeti National Park per person and vehicle entry fees, which were far beyond our daily budget. Imagining that we would get our fill of game viewing in the Serengeti, we declined this option.

The Masai people live in the Ngorongoro Conservation Area and one sees these traditional herders with their bright red wrap arounds herding their cattle as you drive through to the Serengeti. It is quite interesting to see big herds of cattle co-existing with game like wildebeest and zebra. Tourists are welcome to visit their kraals (Masai villages) and take photographs of them, as long as you pay.

The Serengeti is the iconic African game park for a good reason; no other park compares to it with its vast golden green grasslands interspersed with koppies (small bouldered hills) and other varied terrain. It is simply quite unique and one of nature’s wonders.

Heading towards our camp we took a side game viewing track and saw what appeared to be a myriad of large boulders blackening a distant slope. These turned out to be zebra and wildebeest, part of the annual migration. It was astounding to see literally tens of thousands of these animals covering the plains as far as we could see. Hardly bothered by vehicles, we were delighted to drive through the herds, stop and hear the high-pitched whinny of the zebra interspersed by the continual much deeper grunts of the wildebeest.

As expected these estimated three million large animals attract predators like hyena, leopard, cheetah and the king of the beast.  All sleek and fat, they abound on these plains during the migration. It seems that many lion prefer to climb to the top of the rocky koppies for their daily nap but we also saw them in the taller grass and climbing trees. In fact, we have never seen so many lion within one day.

Of all the animals, perhaps one of the most special behavioural sightings was the dancing ritual of a pair of ostriches. The male’s neck and legs were bright red against his black and white plumage as he ran across the veld towards his lady, stopping every so often to crouch, spread his wings and rock them sinuously from side to side in the most gracious way, to which his lady similarly responded before she lead him on again.

The Serengeti public campsites are basic, consisting of a water supply, an ablution block, kitchen, eating and washing up area.  The flies were bad, so we found that it was best to be in the vehicle, looking for game. On our last evening, as the light was fading, hundreds of wildebeest galloped past our camp, about 70m away.

As we were heading north for Kenya, we opted to leave the park via the western gate, and since permits are issued for a 24 hour day from time of entry, we had to be out of the park at 14h00.  On our way we took some of the minor 4WD tracks instead of the badly corrugated ‘main road’ to make the most of our last game viewing opportunity.

We had a very interesting, but slow drive, and when we had to stop to repair another punctured tyre we were worried that we would not make it to the gate in time. On top of this the western side of the park had a huge number of tsetse flies and when a passing vehicle paused to offer assistance, they all jumped ship and descended so voraciously that we got out the Doom to blunt their appetites.

We spent our last night in Tanzania at the Serengeti Stopover Lodge, not far from Ndabaka Gate. The next morning we had a very easy border crossing at Sirari/Isabania and found the officials on both sides of the border to be friendly, helpful and efficient.  For the first time we needed our Carne de Passage and we were happy that we went to the trouble of getting one prior to leaving South Africa.

7 thoughts on “Some of the best Tanzania has to offer”