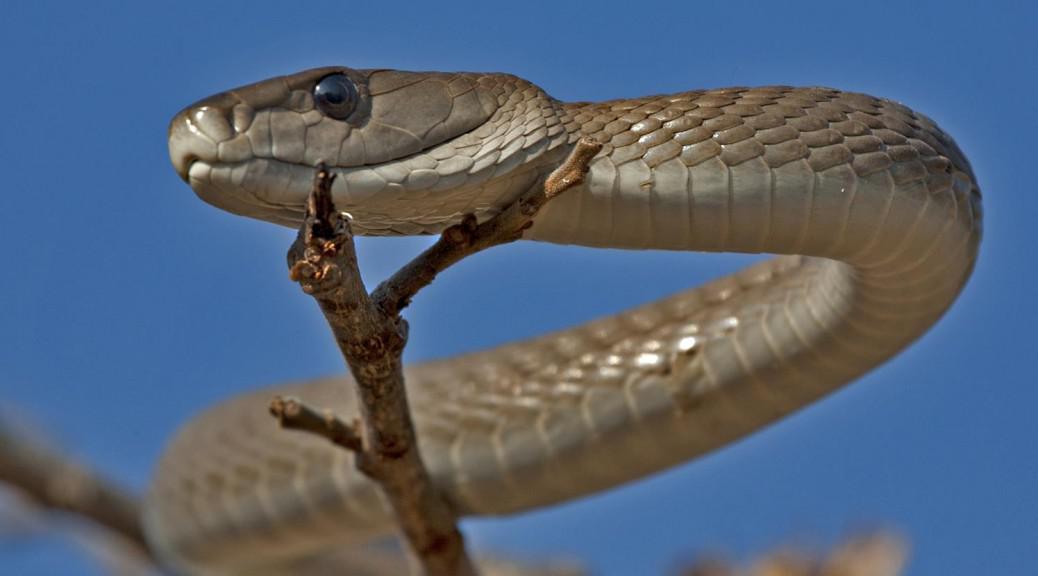 Fatalities from bites are quite rare and the vast majority of snakes are not venomous, with less than 10% of bites requiring anti-venom. Venomous snakes will often avoid humans, and if they bite, they rarely inject their full venom load.

It is best to try and avoid snakes and you should be very careful and remain on the lookout for them whenever you are in the bush. The more noise you make as you walk the more chance the snake has to move off. It is best to wear boots and long pants and also remember to shake out your boots in the morning before putting them on.

Fortunately most snakes will get out of your way and will only strike when they are surprised, have no escape or are threatened. If you see a snake, make a slow retreat, unless you know it may be a spitting cobra. If you remain completely still the cobra will most probably move away. Cover your eyes as these short sighted snakes will spit at the first thing that glints, very possibly your eyes. The adders are often considered amongst the most dangerous as they are slow to move away, especially when it is cold.

Different species of snake have different types of venom, each with unique toxic effects:

Cobras and mambas have neurotoxic venom that attacks the central nervous system. It starts by affecting movement, breathing, swallowing, speech and sight and can cause death due to respiratory insufficiency.

The Boomslang has a haematoxic venom that prevents the blood from coagulating, leading to extensive blood loss into the tissues. However, Boomslang bites are very rare as these snakes are back fanged.

Puff adders have cytotoxic venom that attacks the body’s cells. The bite is extremely painful with much swelling and the victim experiences marked symptoms of shock.

The Mozambique Cobra has mixed neurotoxic and cytotoxic venom. It is considered one of the most dangerous snakes in Africa and it can spit its venom as well as bite.  The latter can cause severe local tissue destruction (similar to that of the puff adder) while venom in the victim’s eyes can cause impaired vision or blindness.

What to do about snake bites

Anybody bitten by a poisonous snake must get professional medical treatment as quickly as possible.  In the meanwhile wash the bite with plain water and tightly bandage the limb. Note that a bandage is not the same as a tourniquet which cuts off the blood flow and should never be used for this purpose.

Keep the victim as still as possible to minimise venom entering the system. If you are spat on, rinse the affected area as soon as possible with clean water or milk.

Photos can be taken of the snake for medical identification purposes but only if there is no risk of the photographer incurring harm.

Also read: Be snake savvy when you’re on the road

The majority of scorpions are only mildly toxic to humans, although their sting is extremely painful and will require analgesic treatment.

Of the more than 1 000 known species of scorpion, only 25 have venom that is deadly to humans.  Four scorpion families have been identified in southern Africa and the potentially dangerous species all belong to the Buthidae family.  In this family the Parabuthus genus and especially P villosus, P transvaalicus and P granulates are potentially lethal. Children are especially vulnerable to these scorpion stings and have a mortality rate of close to 20%.

Prevention is better than cure

Scorpions prefer rocky areas and mostly come out at night, apparently more so when the wind blows.  Ways to prevent being stung:

Pain at the site of a scorpion sting can sometimes be limited with an ice cube, but strong painkillers might be needed. In the case of more marked symptoms, treatment must be given as for snake bites, and the patient must receive medical attention as quickly as possible.


Did you know that all Tracks4Africa Africa GPS Map owners get one free update to the latest version, and 50% off any subsequent updates purchased? Go exploring with the most up-to-date map at your fingertips. Visit our online shop for our latest guide books, paper maps and GPS navigation.