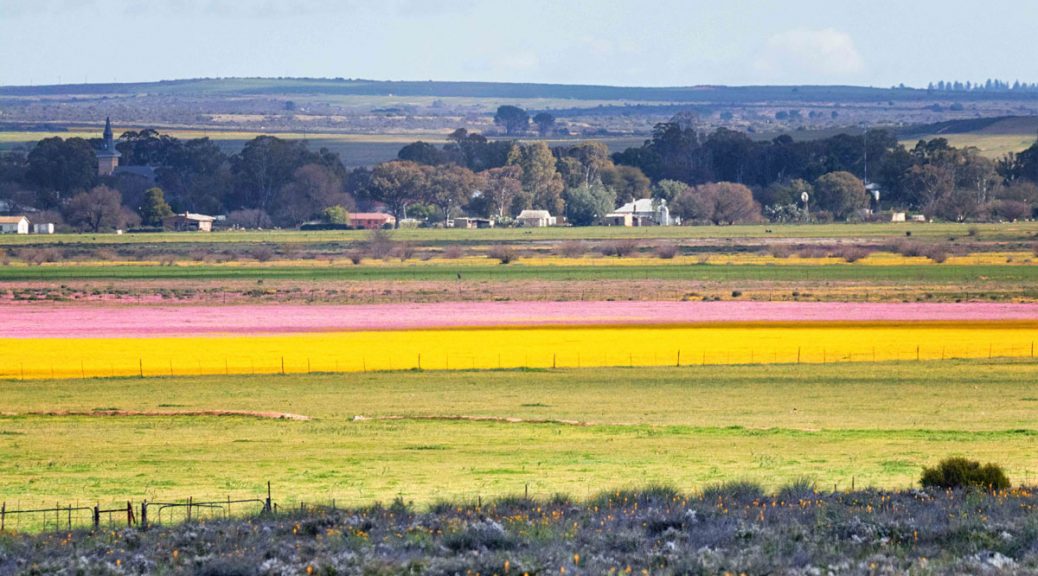 Spring 2020’s bumper flower season was good reason for a getaway, even in the middle of the week. We opted to explore along minor roads from Vanrhynsdorp to Nieuwoudtville before returning to Cape Town via the Cederberg. By Johann Groenewald

My wife and I were discussing all the wonderful flower stories we’d been hearing over the weekend. There and then we contacted Granny to ask if she could come and stay with the kids on Tuesday evening so we could elope.

I started to look for accommodation and it quickly became clear that Namaqualand was fully occupied! We settled for a guest house in Vredendal, which at least got us into the general vicinity.

Succulents and sunset near Vanrhynsdorp

Our trip started out in Paarl only at 14:00 as work had to be sorted out. We headed straight up the N7 to Vanrhynsdorp, popular flower destination in its own right. My wife is an avid collector of plants and we aimed straight for the Kokerboom Nursery. They had a wonderful succulent collection on display and their massive quiver trees are always impressive to see. It was an overcast day so flowers were a bit shy and the light not great. However, as we passed the Hantam Mountains on our way in I made a mental note: golden hour would be showing up the mountain as the sun sets under the clouds.

We took a drive on minor roads around the town and it paid off. We saw three bat-eared jackal crossing a field (camera still in bag) and a great variety of plants in full bloom. We could simply stop on the side of the road and take a walk along it.

We came across a beautiful spot just as the sun was ready to make its appearance and my guesswork paid off. The mountain range was lit up and a spectacle of colour variations followed. The clouds made for a very dramatic backdrop.

The hour or so we spent in the field had already satisfied our appetite for wildflowers.  Vanrhynsdorp is a good base to work from and we could see that the town was overflowing with visitors. The campsite was full of caravans, camping trailers and some impressive overlanding trucks.

In and around Nieuwoudtville

The next morning, we set off to Nieuwoudtville, one of the famous towns in flower season.  The town itself was beautifully decorated in a blanket of flowers and everywhere visitors came out of guest houses to look for some sun to warm them up. The difference in temperature as you drive up the Karoo Escarpment via the Vanrhyns Pass was clearly noticeable.

We did not spend much time in Nieuwoudtville, but instead headed to the Hantam National Botanical Garden just south of the town. This would probably be a boring destination at any other time of the year, but we hit it at its peak. It was wonderful to see the flowers in contrast to the barren fields of the farm next door. There are various hiking and MTB trails in the ‘garden’ and next time we will set aside more time for this wonderful destination.

Flower gazing along back roads

The Oorlogskloof Road is the most direct way from here to reach the R364 which would eventually take us back to Clanwilliam. However,there is a minor road running parallel to this which we took. It is called the Moedverloor Road and it says ‘many farm gates’ on the T4A map. Luckily, I had a willing gate opener with me. She would stop to inspect plants at every gate…

We were happy to meander through the mostly rooibos tea farms and at one point you drive through an old farmstead called Moedverloor. This road was once the access to the Bokkeveld but when the Botterkloof and Vanrhyns passes were built, it fell into disuse.  Today it is just an interesting bypass and used mostly by rooibos tea farmers.

We joined up with the R364 and immediately drove over the Botterkloof Pass, which had some of the best flowers we saw en route. Carpets of pink flowers covered the side of a koppie. Next up was the bridge over the Doring River. Note that this is a proper bridge, not prone to flooding like the level crossings of the Biedouw Valley.

Cruising through the Cederberg

From here we joined up with the tar road leading over Pakhuis Pass to Clanwilliam. The farm stalls on the way were again packed with visitors. I would have loved to have another day or two to drive via the Biedouw Valley to Wupperthal and then south via the Cederberg to Ceres.

This trip just reminded me that we have so many beautiful places to explore on our doorstep. Although the flower season is an absolute must-see, there are so many people at this time of the year. I think our route is worth a revisit as soon as the flowers are gone.

If you prefer travelling along back roads and remote routes, Tracks4Africa maps are for you. Find detailed tracks for tar, gravel and sand, all GPS recorded and verified by T4A travellers. Whether you prefer to navigate by Garmin, road atlas, paper map or smartphone app, there’s a T4A map to suit your needs.