Really looking forward to enjoying the beautiful far northern part of Mozambique, we were disappointed to find it rather inhospitable, offering little in the way of tourist infrastructure.

The landscape is lush, with some virgin forest around the Quirimbas National Park, and there is a real charm in the uniformity of the square red or gray clay houses with thatched roofs. (It appears that the cell phone companies haven’t donated gallons of paint to the community as we saw in the south.)

Outside the few major towns Northern Mozambique seems almost untouched by western civilization; the downside being that it is highly populated and, recalling repeated warnings from local people not to bush camp, it is very difficult for visitors to find a suitable and safe night stop.

Russell’s Place, The Pemba Magic Lodge, provides a haven for a variety of westernised locals, some who come to watch TV, eat and drink. He also attracts tourists like us who spend a few days catching up on jobs and use his free wireless connection. 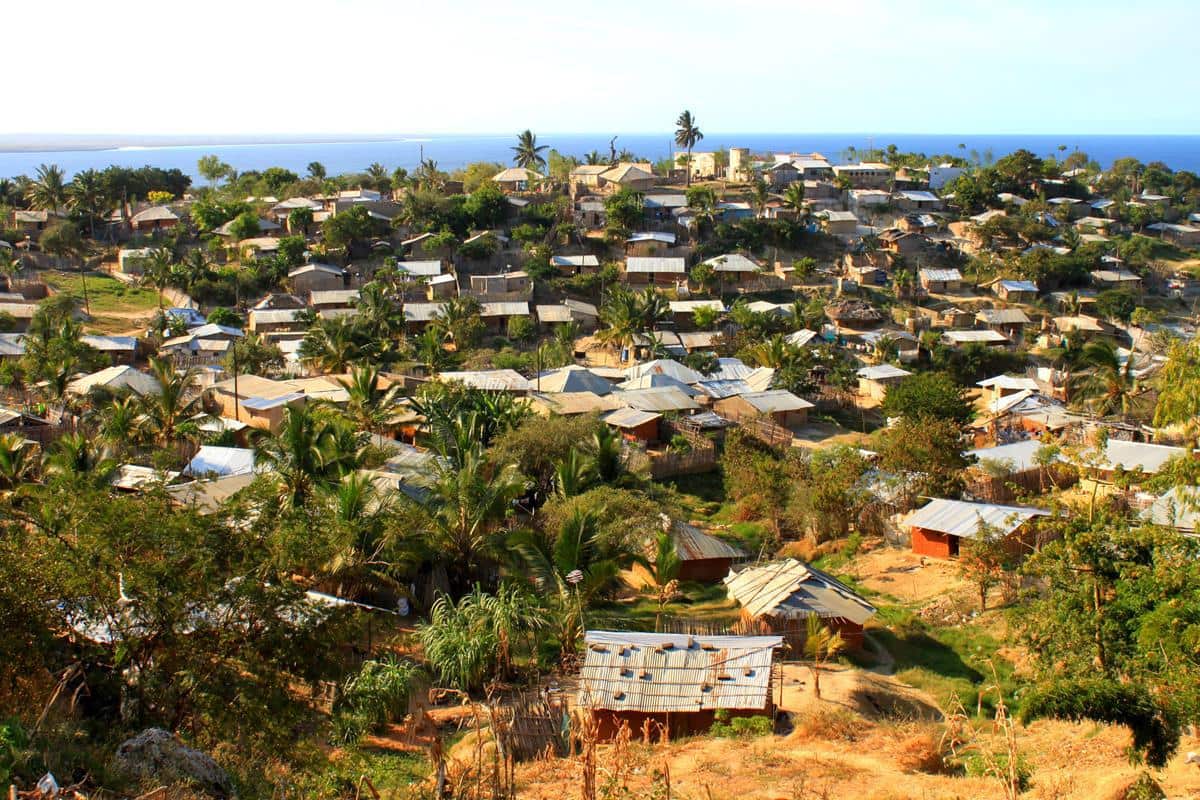 It seemed that apart from a short section of beach front, Pemba doesn’t have much to offer to visitors. It is, however, the ideal place to stock up and recuperate. We managed to top up the larder and the gas bottle but things went pear shaped when Pete was returning from town after trying to purchase materials to repair the broken fridge slide.

Some traffic cops had given him a hard time on his way into town and after they had grudgingly let him proceed, they stopped him at a different location on his way back, again demanding all his documents for scrutiny. A long while later they returned his passport but retained his international driver’s license and original vehicle registration papers, accusing him of failing to display the gross mass and tare of the vehicle; a requirement which only applies to commercial, locally registered vehicles.

They demanded that he paid a fine of 5 000 Meticals (about R1 800) on the spot. Feeling badly mauled after the police drove off with his papers when he refused to pay immediately, he arrived back at camp as it was getting dark.

Apparently Pemba is particularly bad for this sort of thing and after this experience Pete shared the views of those many travellers who have vowed never to return to this country because of this behaviour, the language barrier obviously complicating matters.

We took a coastal route out of town which would link us with the main road but on the way fences and gates made their appearance. When Pete stopped to enquire the way, a charming Yugoslav, with many talents we later learnt, paused his early morning routine, asking us in for coffee.

Retired from formal business in South Africa, Dule had purchased a ten thousand hectare timber concession inland some eightyears ago to save some forest from the destructive activities of the Chinese, and only extracted enough timber for his own use.

His home and several guest houses on his property were most exquisitely crafted out of hardwood and a raised walkway led to his private kilometre of beach, passing on the way a secluded guest villa with its own crystal clear swimming pool.

We had heard that Ponta Pangane is a beautiful spot and according to the T4A information there were two campsites to choose from under the palms. The road wound its way through fishing villages and thick sand in the final few kilometres, ending at a small building situated under coconut palms at the point.

It is indeed a picturesque spot but alas, neither of the campsites exist any longer and we could find no other accommodation.

Two Chinamen involved in the fishing industry told us that it would be safe to camp there; much safer than the other end of the bay where there was a lot of bush, lion, elephant and leopard. Considering the multitude of people from the villages close-by we decided to take our chances with the remote possibility of wildlife and set off in search of a lodge to the south.

Time passes quickly when the sun sets at 5pm. We were obliged to follow smaller and smaller tracks and when they eventually degenerated to footpaths we admitted defeat and used the last few minutes of daylight to find a suitable bush camping spot, literally in the long grass.

A flat area allowed us to pull off and drive in about 60m to a clear space under a large cashew nut tree. The peace and quiet of the bush was beautiful and we agreed that the reports of wildlife in the area were just figments of imagination, which probably applied also to the possibility of safe camping at the other end of the bay.

Crossing to Tanzania by ferry

Now we were within reach of the Tanzanian ferry crossing at Kalimbo near the coast at the mouth of the Ruvuma River, which we had just heard was again operational. However, we were worried if Pete would be able to obtain a Tanzanian visa for his Australian passport at this minor border post. Once out of Mozambique and across the river we knew that he couldn’t get a new visa there to re-enter, so it was vital to be sure of access to Tanzania, otherwise we could be caught in no man’s land.

For our last night in Mozambique we intended to camp under the large mango tree on the premises of some German missionaries who were situated about 15 km from the border. It turned out that Annemarie and André, who had been there for ten years, were from South Africa and had always been intrigued at their German label. Promising to correct that error in the T4A database, we spent a peaceful night, having confirmed with Russell back in Pemba that Pete could indeed get his visa at the border.

The next morning we made our way to the border and the ferry at 8am. The only formal thing about this crossing is the ferry itself; a large barge-like vessel capable of carrying 100 people, one large and several small vehicles.

The original ferry sank in 2008 and it took four years to replace it; those crossing the river in the interim apparently making do with a couple of dhows tied together. The assembly point on the Mozambique river bank is chaotic with churned up hardened mud leaving deep ruts and vehicles parked in a mostly haphazard fashion, some intending to cross and others waiting to pick up passengers or goods.

Small shabby thatched eating outlets provide food for the good crowd gathered there.  Being early we were near the front of the queue, not being sure how many crossings could be made per day as it was approaching neap tide.

The river is shallow, explaining the captain’s dependence on the tide as he followed an indirect path to the Tanzanian bank nearly a kilometre away. We were first onto Tanzanian soil, thankful for 4WD after bypassing a less fortunate sedan stuck up the sandy river bank.

Visa formalities went smoothly but then we had to wait in the sweltering heat for about 90 minutes to clear customs whilst the people from a trio of vehicles finished their business.

Although we found Mozambique to be beautiful, it was not entirely welcoming and we were excited to be in a new country with a more relaxed culture and friendlier people. This was immediately obvious in the interactions we had at the border post as well as during our customary lunch stop next to the road as we headed for the Ruvuma Mnazi Bay Marine Reserve about 45 km north…