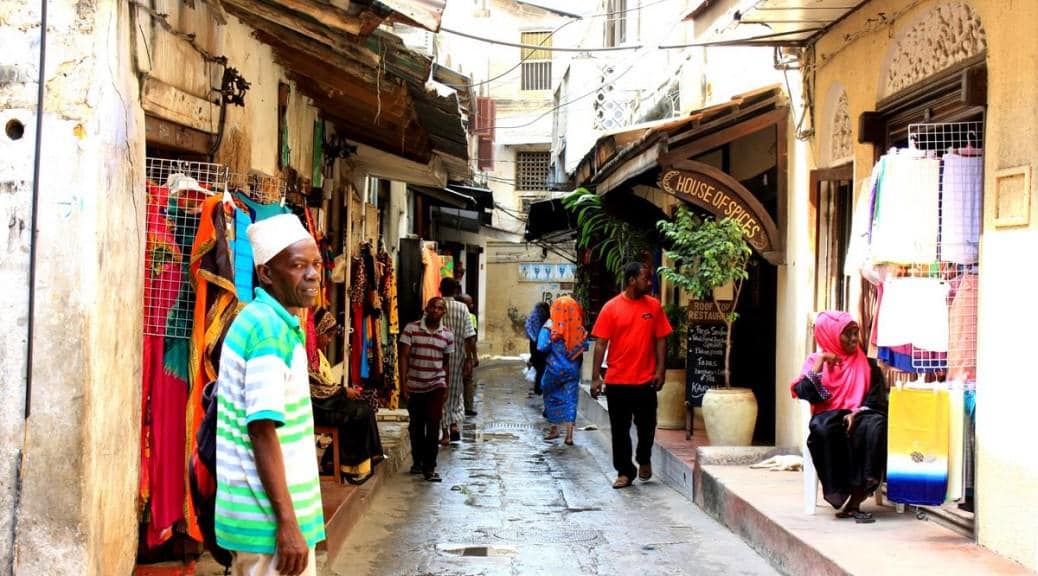 Karibu! Welcome… seems to be the spirit of Tanzania. As we entered the country on the ferry at the Kalimbo border post the vegetation was lush and green and the people laid back and friendly. Stopping for lunch next to the road, passers-by waved and greeted us with a friendly ‘Jambo!’ and the children weren’t scared to stand on tip toes to investigate our kitchen on wheels.

I immediately noticed the Muslim women’s’ bright, colourful dresses with matching scarves covering their hair. Hard to miss also, even though the roads are good, is the low average speed because of the 50 km/h limit in the frequent villages, which is enforced by ferocious speed humps and traffic police with radar. There are also plenty of buses on the road, which assert themselves as they thunder along, as well as bicycles and motorbike taxis.

Visibility was excellent as we explored the astonishing coral gardens with an astounding number of fish species. I tried to count, but gave up after reaching 50, making the Cape Town Aquarium look like a home made fish tank. The Reserve claim to have more than 250 species of hard coral and more than 400 species of Marine Fish!

Whilst local fishermen are allowed to fish for the pot, the Marine Reserve is protected, although it was sad to see a big truck dumping effluent of some type into the sea.

On the way north to Lindi we passed exquisite Baobab forests, something we are not used to seeing near the coast, and then, as there was no camping option in this busy town, we toured the grimy streets until we discovered the Rahma Lodge. There we got a clean room, a hot shower, air conditioning and excellent friendly service from the youngster on duty.

Our next stop at the Kilwa Dream Lodge in Kilwa Masako was pleasing, camping once again under palm trees with the sea lapping a few metres away.

Zanzibar
Then on to Dar es Salaam, a ferry trip to Zanzibar Island and Stone Town for the day. It is the former capital of the Zanzibar Oman Sultanate, and was the flourishing centre of the spice and slave trades in the 19th century and the main city of Zanzibar during the period of the British protectorate. It is said that the first stone houses in Stone Town were built using coral in the 1830’s.

According to Wikipedia the shortest war in history was fought when the sultan surrendered after 45 minutes against the British in 1896 during a short lived rebellion of the Zanzibari Omanis against the British rule.
Stone Town reflects a unique mixture of Arab, Indian and European cultures, for which reason the town was designated a World Heritage Site in 2000.

I found the architectural attractions of Stone Town a bit disappointing but, unlike some who find the markets squalid, over priced and crowded, I enjoyed the hustle and bustle, the multitude of bright colours and smells that assailed my senses.

The fish, fresh produce and spice markets, which are in the heart of Stone Town, are a massive display of bright colours and strong aromas. Narrow streets separating tall buildings, heavy wooden carved doors and ornate balcony balustrades all add to the charm.

Bush camping near Bagamoyo
From Dar es Salaam we headed north for El Campo Bush Farm & Camp, taking nearly three hours to cross the ferry from South Beach to the city side, followed by a further very slow journey out of the city environs.

Finally, well into the bush, the trail disappeared over the last half a kilometre to our intended night stop and we drove through the veld following the GPS track, arriving half an hour before sunset at a few derelict huts which must have once been the camp. Being secluded and knowing that we didn’t have enough daylight to look for another campsite, we pulled in behind a big tree next to one of the ruins and cooked supper, thoroughly enjoying the fireflies, glow worms and shooting stars which put up a beautiful display in the darkness. We drifted off to sleep with the sounds of the bush and faint music from a faraway village, to be awakened by the birds after a good night’s rest.

The Usambara Mountains
It was pleasant driving north on the A14 towards the Usambara Mountains as the road condition is excellent with effectively no open road speed limit. However, because of the 50 km/h limit in the perpetual villages our average speed was low. The vegetation is lush and varied with patches of agriculture interspersed with natural bush. Tall Mahoganies, sometimes as many as five clustered closely together, stand out proudly above the rest of the trees.

As we neared the Usambara Mountains the rich red earth was covered with bright green vegetation. From Mosho we turned onto the narrow road winding its way up into the mountains and were surprised at how highly populated and cultivated the high ground is. Unfortunately we also had our first Tanzanian experience of the adverse effect of tourism as we were waved down by kids at a few viewpoints. They weren’t particularly friendly but demanded money without even the customary welcoming ‘Jambo’.

This was in sharp contrast to our interactions with Tanzanians thus far. Even when the local villagers we had tried to ask about bush camping the previous night couldn’t understand us, they greeted us with big smiles and friendly ‘Jambos’.

Discovering Usambara wines
In Lusotho we camped at Irente farm and since they are renowned for their home cooked meals, we asked if they would be prepared to cook us a Swahili meal. We had dinner with the hosts, Uthe and Richie, and some other guests and thoroughly enjoyed the flavours of the different dishes. To our surprise Richie offered us a white wine that was produced in the Usambara Mountains.

Uthe arranged for us to visit Sakharani, where the delicate Sakharani Chenin Blanc which we had enjoyed and Sakharani Port (made from the Isabella grape variety) is made by Brother Selestine at the Catholic monastery.

The Benedictine Fathers produce about 7 000 litre of wine per year at an altitude of 1 600 metres. Only one of the 120 ha estate which belongs to the church is planted with vines. The rest is planted with a variety of fruit trees, vegetables, macadamia nut trees and also forest for producing wooden furniture. Apart from the cultivation, they also have livestock.

From Lusotho where we are currently camping high up in the Usambara Mountains, we’ll head north-east towards some of Tanzania’s most famous landmarks, Kilimanjaro and the Ngorogoro Crater. For me the migration is a bucket list item and it seems like we might be lucky enough to see it in the Serengeti….