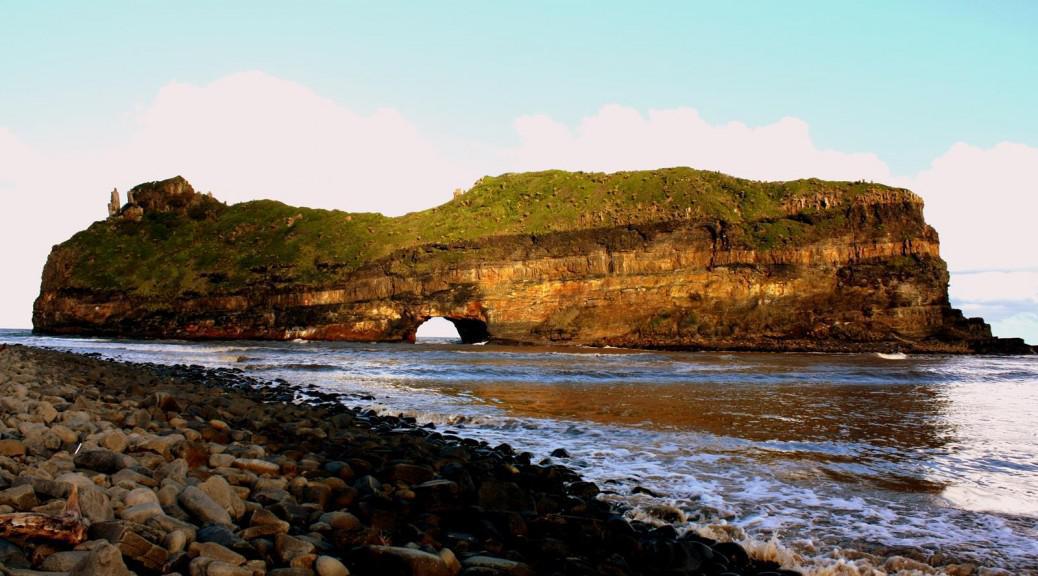 Still in the Transkei

White Clay close to Coffee Bay is a small establishment with self-catering chalets, a bar and restaurant as well as camping facilities. Whilst it had rained, with more threatening, the ground wasn’t sodden and we much preferred the airy and cool camping option to the claustrophobic confines of walls and a roof. Again we were spoilt with our own ablution facilities and hot water.

We chose to erect our large ground tent and vestibule, abutting this at an angle to the kitchen side of the Hilux and draping the awning over the gap in between.

The next morning dawned sunny and clear and after a knee jarring 6km run uphill and down dale we got busy with chores around camp. As we hadn’t had much chance to use the bakkie before we left, apart from a trial camp one weekend before departure, there were jobs to be done as well as the on-going quest for the most efficient method of packing.

After feasting on freshly cooked seafood which we bought from a local fisherman we set off for the famous Hole in the Wall just 10km away.

Hole in the Wall

Enthralled by this beautiful coastal region, we crested the last rise before Hole in the Wall to see the golden, late afternoon light spreading its warm glow over the lawn green, rolling hills below. Neat clusters of brightly painted ‘matchbox’ buildings dotted the landscape and in the background stood the cliffs at the Mpako River mouth, home to Hole in the Wall.

Over the eons the elements have carved several channels to and from the sea, chiselling away the softer material around the existing rocky cliffs which rise steeply from the junction of river and ocean. The view from our vantage point was spectacular. A steep descent driven in low range to save the brakes finally brought us to the Hole in the Wall Hotel, where we parked.

After a short walk we made our way over a small hill, descended along a narrow path, entering an airy, enchanting forest of gnarled trees, carpeted under by green lawns. We caught tantalising glimpses of the rocky cliff features facing us through the trees and were finally rewarded by the full vista as we reached the rocky bouldered beach.

To the front was a rock island with slanting black and orange layers, topped by a grassy covering. Just left of centre of this rock island, at sea level, was the semi-circular Hole in Wall which was washed out of the rock over millennia.

Fascinated we watched as the larger wave sets, approaching on the seaward side, came crashing through this natural hole in the rock, initially contained in the tunnel but finally able to release their energy and belch spray and foam at the outlet.

This amazing natural phenomenon is most definitely worth a visit.

From Coffee Bay we took the back roads to Port St Johns.  It was a long day’s drive but the soft, rolling hills which were manicured by cattle and sheep kept us captivated. Stuck in the Friday afternoon traffic in Lusikisiki due to a GPS error, meant that as we passed Port St Johns we were pressed for time but agreed we wanted to go back there one day.  We did, however, spoil ourselves with a peaceful lunch stop under a big tree. A group of curious young boys, initially shy, came closer, but after sharing our delicious Toppers biscuits with them we had a nice chat and parted friends.

We crossed the Mtamfuna River which forms the border between Transkei and KwaZulu-Natal at dusk and were surprised to see a distinct change in the vegetation. Immediately the rolling hills were covered in sugar cane, banana plantations and tropical, lush vegetation.

Arriving at our night stop, Port O Call Caravan Park in Trafalgar, well after dark we selected what proved to be a delightful, shady campsite with a sea view. Most of the holiday makers had left and we had this charming park with excellent facilities almost to ourselves.

The beach is just a few hundred metres from the campsite and we spoiled ourselves with a nice run on yet another golden stretch of beach. We had only booked two nights but decided to spend another day, Sunday, to rest.

However, this was mostly spent catching up on computer work, waterproofing the awning and spraying our clothes with Permethrin. From here we enter mosquito country and since we plan to be on the road for eight months and exposed to Malaria for most of that time, we decided not to take prophylactics; it being generally accepted to be poor practice to do so for so long. We intend to be extremely diligent with measures to prevent being bitten, including the use of Permethrin, an insecticide sprayed onto clothing which is reputed to be effective in repelling ticks and mosquitoes for up to 3 months, despite washing. We are also travelling with Malaria test kits and Malaria treatment. (See our blog article on Malaria).

After a blissful stay at Trafalgar, we are currently heading towards Cape Vidal in the Greater St Lucia Wetland Park (nowadays called the iSimangaliso Wetland Park.) We’ve heard this park is astonishing and we’ll share it with you in our next article.

2 thoughts on “From the Transkei to KwaZulu-Natal”