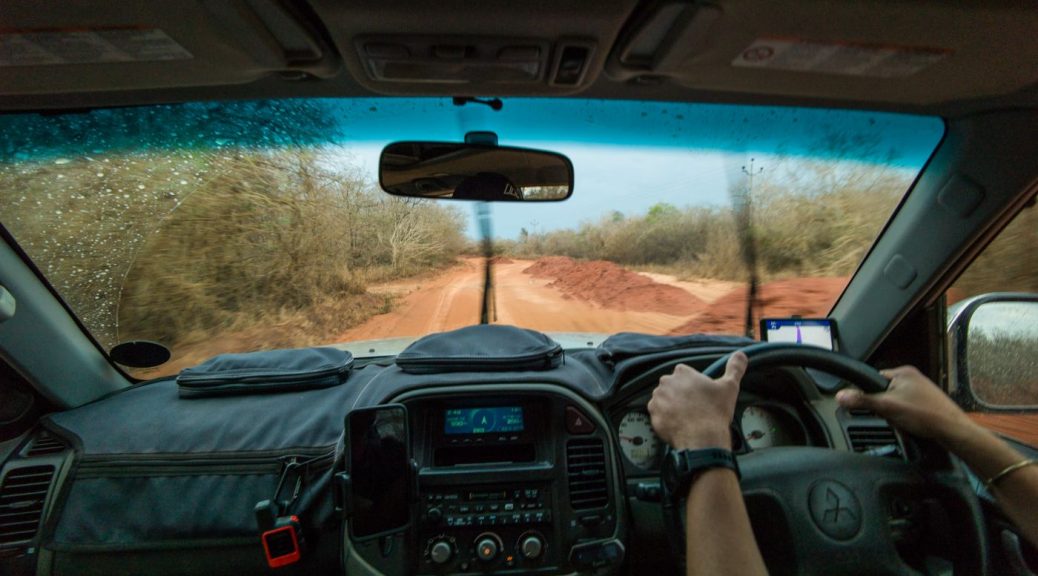 Travelling from South Africa to Mozambique via the Kruger National Park is the ideal way to combine a bush and beach holiday. But give the southern route via Giriyondo a skip for the quieter roads and birding bonanza of the north. Words and pictures by Morgan Trimble

The quickest route from Gauteng to Vilanculos sends you east on the N4 to the Komatipoort border post and into Mozambique, past Maputo and up the EN1 coastal highway. These days, you can make the 1,229km journey by sedan. Of course, a 4×4 handles the potholes better and can traverse the thick sand to most coastal lodges.

But if you have a 4×4 and a few extra days – and it’s the dry season – why not spend time in the bush on your way to the beach? With a stopover in Kruger, pass through the Pafuri border post, cross the Limpopo near Mapai, and head east across country to Vilanculos. The route is slightly shorter, but it is slower going. The advantages are a much quieter border post, no traffic, and, of course, exploring the bush and lesser-travelled routes.

First stop is the Kruger National Park, the best opportunity for wildlife viewing on the route. We entered at Punda Maria Gate and camped at Punda Maria Rest Camp. Besides watching wildlife at the waterhole, we heard a leopard calling in the night. We found him eating a kudu the next morning just a hundred metres out of the gate.

As we drove towards Pafuri Border Post, we spotted another leopard, a pride of lions on a buffalo kill, and plenty of other wildlife. There are loads of alternatives in Kruger. You could spend a few days travelling up through the park or enter further north at Pafuri Gate.
The Pafuri Border Post is open daily from 8 am to 4 pm, and unlike the Giriyondo Border Gate further south, doesn’t require an overnight stay in the park.

If you plan to pass through as a day visitor, remember that you can’t take alcohol into the park. Make sure you’ve double checked the list of required paperwork and vehicle kit to comply with Mozambique’s rules. Buy your third-party insurance ahead of time; it isn’t available at Pafuri Border Post.

After crossing the border, you enter Limpopo National Park. Don’t expect great game viewing here. The floodplains of the Limpopo River are populated with rural people and their livestock. Almost immediately after the border, wildlife spoor turns to cattle droppings. Kraals and goats are abundant. The transition is jarring, but the landscapes are still beautiful, including amazing fever tree forests.

We stopped at Dumela Wilderness Safaris’ Pel’s Owl Campsite just 8 km after the border. It’s a beautiful, shady spot on the banks of a lagoon. We spotted crocodiles and hippos but saw more cattle than wildlife. Besides the scenery, the birding here is the special draw. We pre-booked a guided birding walk for the afternoon of our arrival with hopes of ticking the elusive Pel’s fishing owl. Guide Abraham was in camp waiting for us. He led us up and down the far banks of the lagoon. After two hours, we found a clue: fish skeletons and a few feathers at the bottom of a massive tree. The owl was high in the canopy. Without Abraham, we never would have spotted it!

From Dumela, we continued towards Mapai, following the river on the border of the Limpopo National Park. Crossing the Limpopo was uneventful. The height of the October dry season reduced the river to a puddle. During the wet season, punters take vehicles across on a small ferry. You’ll need strong nerves and a good insurance policy if the river is flowing (usually November to June but ask nearby lodges for updates before your trip).

We intended to pass through Mapai and spend the night camping at Banhine National Park. Although the park is in the early stages of recovery, we thought it would be nice to see. But our newly installed rear shock shook loose on the corrugated gravel between Mapai and Banhine, forcing us to turn back.

While we were looking for the nut and washer that had come loose, we found several nuts and bolts that didn’t belong to us scattered along the road, so this is a common problem. Travel in convoy or bring a satellite communication device and make sure you have food, water, and shelter from the sun should you get stuck.

Also read: Off the grid, still in touch with Garmin inReach

Back in Mapai, we checked in at a new hotel, Casa Bufalo, where the helpful owner, William Hosie, helped us find a mechanic. The following morning, we set off on the long road to Vilanculos. The 440km route took us the entire day, although we did burn some extra time re-fixing the shock, which came loose again on the same stretch of corrugated road. This time George, the village mechanic of Machaila, rethreaded the shock with an angle grinder for a lasting fix.

Our route snaked past villages and through mopane veld on a sandy track barely big enough for a vehicle. It transitioned to wide gravel eventually and onwards to a muddy mess. Rain had flooded the road in spots, but thanks to our 4×4, we didn’t have any trouble. We arrived in Vilanculos at sunset. After taking the road less travelled, we felt we had really earned our R&R, peri-peri prawns and sea views.

Embrace adventure and go off-the-beaten path in 2020! Don’t forget to load the latest GPS maps on your Garmin device to keep you on track. Map owners are entitled to a free upgrade on the next version and 50% off all subsequent purchases.

One thought on “Kruger to Vilanculos: from bush to beach”