Since 2008 adventure biker Craig Marshall has been leading tours along Southern Africa’s most memorable routes. Now he’s making the back country accessible to independent travellers with a new series of guides and using Tracks4Africa maps, of course.

Adventure is a way of life for Craig, who grew up racing BMX and mountain bikes in the ’80s. Before long he’d graduated to hardcore downhill MTB and then off-road adventure biking. It’s this intrepid bent that lies behind his passion for exploring off the beaten track. “I avoid long stretches of tar if I can,” he admits.

Inspired by the documentary The Long Way Round, in 2008 Craig found himself looking for adventure biking routes in Southern Africa. When he couldn’t find a routes website, he decided to create one himself. Luckily, he’d worked as a graphic designer and sports photographer!

Within a short time his website was attracting overseas visitors and he was getting bike rental requests… Today Craig is the owner of MSA Travel and has run 128 guided tours, planned over 400 self-guided routes and ridden more than 600,000km in South Africa, Namibia, Botswana, Zimbabwe and Swaziland. As probably the most experienced motorcycle guide in Africa, he knows where all the hidden gems are located.

Now he’s sharing his knowledge in a new series of guides called Back Country Southern Africa. The first book focuses on the Garden Route and Route 62. Tracks4Africa asked Craig about his travels in the back country and what readers can expect from the route books.

How do you define back country routes?

Any route that’s not on the main travelling routes – the N1 and N2 – and generally boring highways. Gravel roads, old ox wagon trails and twisted mountain passes are the routes through the back country.

What is the navigation set-up you use when travelling?

I preplan and research ALL my routes and travels on Tracks4Africa maps with Garmin MapSource as the route creator software. The route is converted into a Track, so it doesn’t recalculate whilst driving/riding and it’s split up into day-by-day GPX tracks including fuel stops, accommodation and points of interest.

I use the Garmin Montana 680, as it’s the only GPS in the range that can handle up to 10,000 track points without splitting the route into useless pieces. The Montana is mounted on my handlebars. The T4A Guide App is for looking up information on the fly – but I use the Garmin for this as well.

Gear up: Get your Garmin GPS, accessories and value bundles (device plus Tracks4Africa GPS maps) through the T4A online shop.

Can you share a time you were thankful for your T4A map?

Mostly I have already checked out the route in detail before I venture into the back country. But there have been several occasions where Tracks4Africa has saved me by NOT routing the tracks through a road with locked gates. There’s nothing worse than riding 60km only to discover a locked gate.

I have heard many stories of other bikers getting stuck at a deep river crossing in wet season, encountering locked gates or finding themselves on private game farms because they tried to use Google Maps for route planning. Google has no idea about the ground level conditions along the way.

What makes the back country in Southern Africa so rewarding to explore?

There are over 400,000km of gravel roads in Southern Africa, littered with more than 360 mountain passes and tens of thousands of points of interest. As a professional adventurer, photographer and filmmaker, I find it heaven on earth.

What inspired you to create the Back Country Southern Africa guides?

I’ve been creating trip itineraries for my customers for 12 years and have always wanted to publish my own books. During the lockdown, I took the time to put together a photobook called Shooting from the Saddle. I realised I have more than 198,000 high-resolution images, thousands of GPS routes and a wealth of travel info. This is the next step.

Garden Route & Route 62, available in late February, is the first of three books, with more to come. My life partner, Kirsten Fugard, and I are travelling and shooting videos and images, and creating the books and documentaries.

What can readers expect?

With this first book, I’ve created three different routes for all levels of self-drive traveller – whether overlanding by motorcycle, 4×4 or sedan. 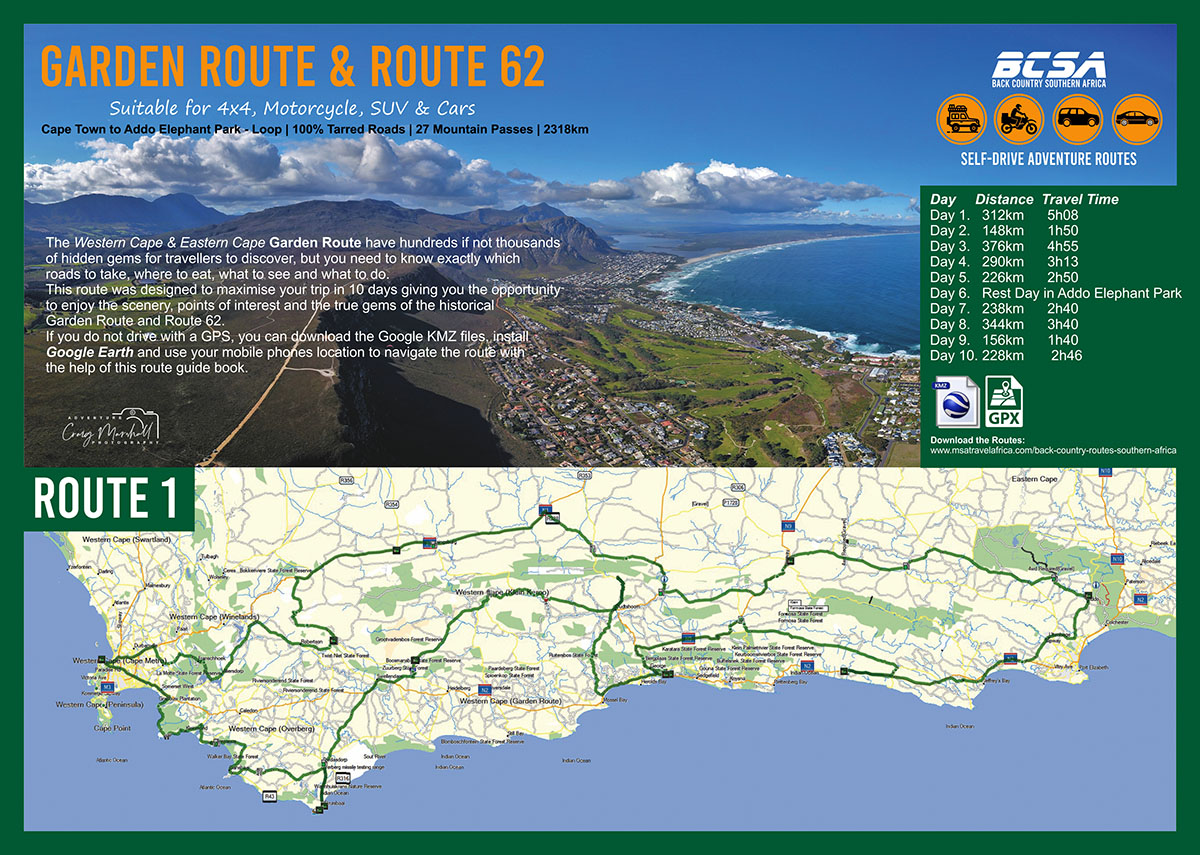 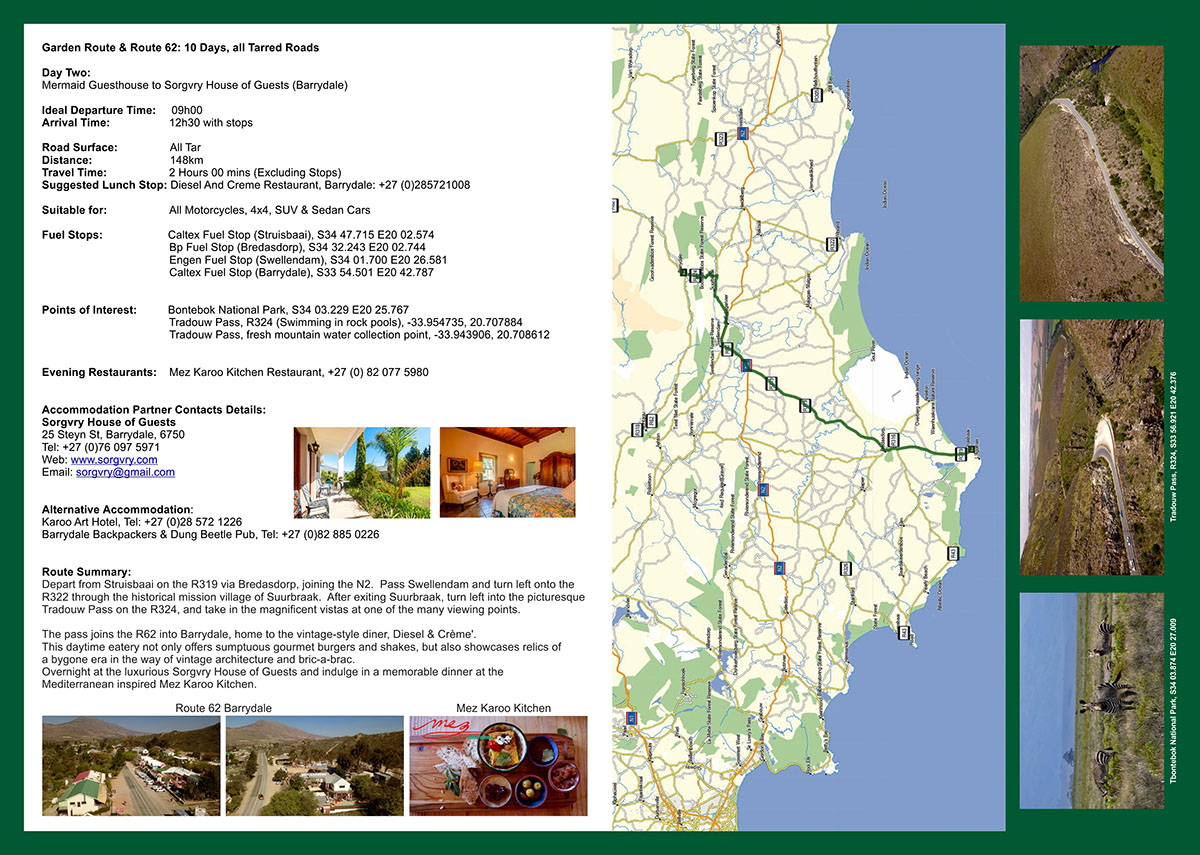 Aside from covering roads that take in the Garden Route and Route 62, the book also spotlights three magical kloofs. The routes through Baviaanskloof, Gamkaskloof and Attakwaskloof can be considered hard core and for 4×4 and dualsport bikes only.

In addition, the book contains Tracks4Africa maps, recommended accommodation, best breakfast and lunch stops, adventure activities along the way and must-see sights. Each route book will have an accompanying video documentary on my You Tube channel, MSA Travel Africa. We’re also creating a series of destination clips to showcase little-known gems like Mez Karoo Kitchen in Barrydale and Outeniqua Mountain Lodge near De Vlugt.

What do you never travel without?

Do you have a ritual when you arrive at your overnight destination?

Yes, set up the charge stations and plug all equipment in, download all clips and images, and then grab a beer. Sometimes the other way around.