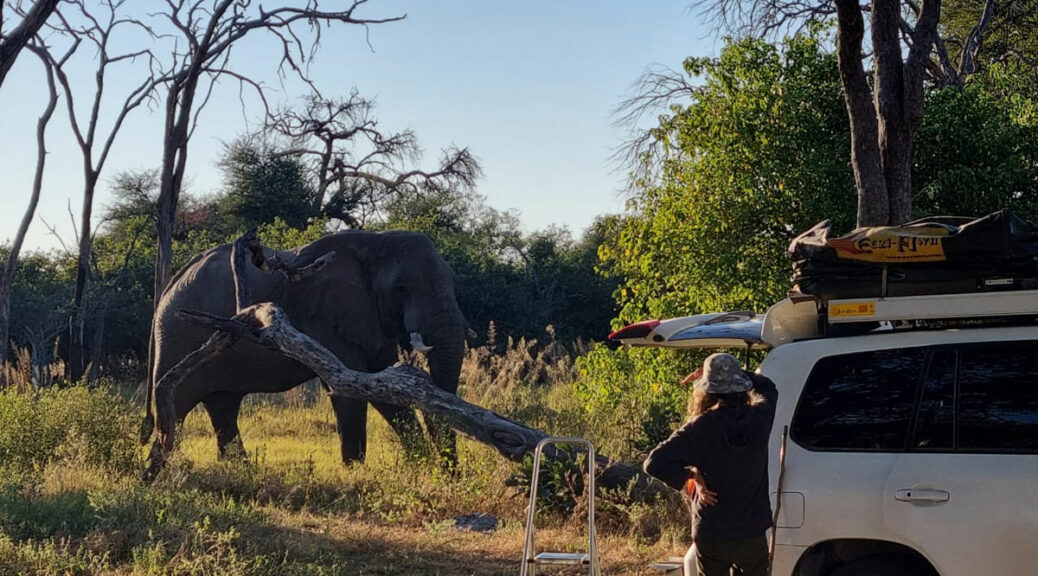 In the far north of Moremi in Botswana, the breathtaking riverine scenery is rivalled only by incredible sightings around every corner. But where should you stay? Whereas North Gate is inside the game reserve, Magotho is in the concession outside the park boundaries. Romi Boom weighs them up after a recent trip.

The scenery and sightings in northern Botswana are spectacular, and it’s a toss-up for first prize between Moremi Game Reserve and the more famous Chobe National Park. In the northeast of the Okavango Delta, the Khwai River separates the Khwai concession area from Moremi Game Reserve. In the east, the area is bordered by the Savuti section of Chobe National Park. Game roam freely between these areas. Sightings are plentiful throughout the year because high water levels attract game and the predators that follow them. This is true even in the dry season when the river forms lagoons and channels as the seasonal waters from the Angolan highlands arrive.

We even encountered flooding deviations on the main Maun/Savuti/Chobe road, at Mababe, where a fish eagle had just landed a catch of about 45cm. On this same road we happened upon the sighting of a lifetime: a flock comprising millions of red-billed quelea, the most populous bird on earth, also called Africa’s feathered locust.

We booked camping accommodation at both Moremi North Gate and Magotho Campsite, and found them to be quite different in what they offer.

Booking for camping at both North Gate and Magotho is straightforward. Emails were answered promptly and camping vouchers forwarded once payment received.

Tariffs given for SADC visitors.

Park entry fees to be paid at North Gate in cash in pula upon arrival, to the Department of Wildlife and National Parks, which is a separate entity from SKL Camps. Even if your voucher from the latter says “Fully paid”, you still have to fork out a considerable amount of cash to the parks board. We paid BWP 120.00 per person per calendar day (NB: not per 24 hour period) spent in the park, BWP 50.00 per vehicle per calendar day spent in the park.

North Gate: The ablutions were spotless and serviced daily. One of the ablution blocks was out of order. In the other only the men’s showers had hot water.

Magotho: Ablutions consist of neat canvas structures but although there are water tanks, there is no water. Take your own to have a shower and a flush toilet.

North Gate: Immediately to the left past the pole bridge and entrance gate, south of the Khwai River. Spacious stands, well cleared, with large shade trees, a concrete fire pit and a rubbish bin. We pitched our tents under a giant leadwood tree and a beautifully shaped rain tree.

Magotho: Large camp spread out along the northern bank of the Khwai River. Stands are allocated at the office in Khwai village (so small that it only has one basic shop), upon arrival. The village, near North Gate, is quite a distance away if you are driving from Maun, and you will have to backtrack. If you fail to report to the office, opting to choose any one of the numerous stands (they all seem inviting and empty!), you may be asked to pack up and relocate when the camp officials do their rounds in the afternoon. Each stand has a concrete fire pit and ours also had a braai built in brick. There is a central deposit cage for rubbish.

North Gate: Plenty of loops and tracks meander along classic riparian forest to the west and east of the entrance gate. Most of these are along the Khwai River floodplain. During our visit in April many tracks were inaccessible as a result of the particularly wet season.

Magotho: Depending on water levels, there may not be many suitable tracks. The floodplain in this incredibly rich ecosystem is vast and sprawling, with ancient watercourses featuring papyrus swamps, aquatic grasses and sedges, as well as open areas dotted with camelthorns, and extensive stands of mopane.

Magotho: Elephant passing through camp at all times of the day, vervet monkeys, high densities of tree squirrels, giraffe, slender mongoose, impala, red-billed hornbill, open-billed storks, pied kingfishers, hippo. Wild dogs have a den beside the road, just past the turnoff to the camp. They appear to be flourishing and are often spotted in the area around Khwai. The pack we saw consisted of 11 well-fed individuals.

With hindsight it was a good idea to split our time between the two camps. Both offer unique attractions, with Magotho being the “wilder” option. For me, two nights at each was enough since the terrain makes it impossible to explore on foot. With so much to see in this vast wildlife paradise dominated by waterways and flat floodplains, it made perfect sense to head in further.

Planning a trip to Botswana? Find all the information you need in our Botswana Self-Drive Guide, from destination descriptions and accommodation listings to advice on preparing your vehicle and handling the red tape.