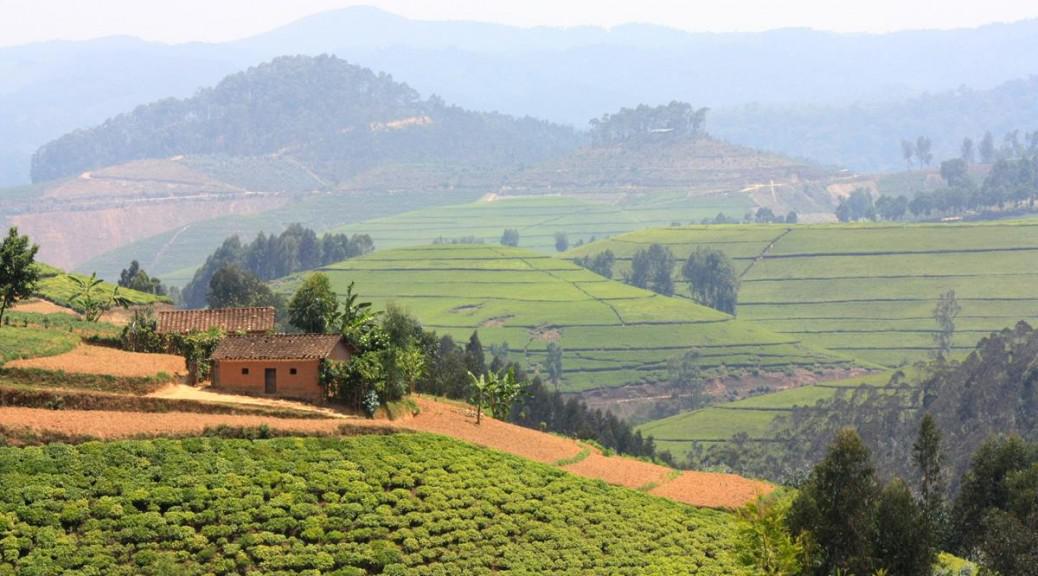 Thus far we had made a point of using minor border posts and our entry to Rwanda was no exception. The Cyanika border (on T4A indicated as Cyuve border) is indeed minor, so much so that all business for both Ugandan and Rwandan immigration is transacted out of one office, even issuing visas. By Karin Theron

We were once again fortunate to have a quick and easy border crossing, Upon entry we once again noted a marked difference between countries. The architecture had a definite western influence, there were more people walking on the roads and sadly, the children approached the car, knocked and peered in and demanded money. A heavy deluge cleared the roads until we reached Lake Kivu and set up camp at Inzu Lodge.

On first impressions Rwanda was yet another highly cultivated and highly populated country. However, I was extremely pleased to see attempts at gardening; neatly trimmed decorative hedges and even a lone rose bush here and there. Also, Rwanda is a remarkably clean country.

No matter how much trip research one is able to do, there’s no substitute for chatting with fellow travellers. The community of overland travellers love sharing their experiences and valuable information.

Such was the case just before we left Lake Bunyonyi in Uganda where we had the good luck to chat to Sam Waldock who works at the British High Commission in Kigale. His advice persuaded us to head for Gisenyi at the north of Lake Kivu, overnight there and then head south via a long easterly detour on tar, thus avoiding the bad gravel road shown on the T4A map which runs down parallel to the lake.

The Congo Nile Trail Section One

However, both those route options were ruled out when we saw the ‘Congo Nile Trail’ signpost on arrival in Gisenyi. Having heard about this some time ago, we decided to rather follow this trail, which skirts the shore of Lake Kivu.

The trail had a rather unimpressive start around the local brewery but then turned out to be one of the most interesting drives of our trip.

The eastern side of Lake Kivu is hilly, fertile and intensely cultivated. The terrain ensures that the narrow gravel road we began to follow is never flat or straight as it winds its way south. Remaining well above lake level, it offers superb views of the deeply dissected, convoluted lake shore, with its clear green waters and myriad peninsulas and islands. Progress was slow as we stopped innumerable times for photographs and to gaze at the views below. Lake Kivu is without a doubt the most charming lake we have seen on this trip.

About 40km on and a few hours later, we reached a T-junction, the left fork leading to the Congo Nile Trail Divide and the road to the right to the Trail mid-point base camp. Without any GPS track for guidance, we opted right for the route that would keep us near the lake.

Shortly after Nkora Fishing Village, the road deteriorated and we repeatedly asked people if it would take us to Kibuye, our intended night stop. They invariably indicated that it would but that it was impassable. After deteriorating to a one spoor track over a few kilometres and further negative comments on our choice of route we retraced our steps, looking unsuccessfully for the Congo Nile base camp to seek advice.

The allure of exploring an intriguing route overruled our misgivings and we continued south, comforted by the fact that we were on what clearly had once been a properly built road. Each stream crossing was passable over a log bridge and the route surface was relatively good.

What had been a gravel road, became a twin track and finally, dropping steeply down to lake level, a footpath. Local villagers pulled out a couple of extra planks to enlarge one crossing that was too narrow for comfort and after that the track became overgrown.

We felt a bit more comfortable when we found a dotted line, indicating the Congo Nile Trail, on Open Source Maps on the Tablet device. We forged ahead, holding our breath each time we reached a watercourse; reassured when we found it passable.

After about 14 km of captivating driving on what we then realised was a hiking trail, we began to reach civilisation, the road becoming recognisable as such, despite its now atrocious surface. With whoops of delight and a ‘high five’ we climbed away from the lake and towards Karongi, thrilled to have persevered and in the process, creating a very unique GPS track for others to enjoy. It took us the biggest part of a day to drive the 91km from Gisenyi to Karongi, the first section of the Congo Nile Trail, which we would rate as a five-star trail.

From Karongi we headed south-west for Kibuye which is situated about halfway down the lake. We spent an hour looking at various camping options, returning to the Holiday Hotel where we pitched camp a few metres from the lakeshore, enjoying a balmy, peaceful evening.

Realising that it would be hard to top our previous day’s experience, we nevertheless decided to search for Section Two of the Congo Nile Trail and see where it took us. We were very disappointed to find that it ran along the new highway to the south, which is still under construction.

Although we only got brief glimpses of Lake Kivu, the hilly countryside was pretty. Neat brick houses with red tiled roofs dotted the landscape that was covered in banana trees, coffee bushes and sugar cane.

Down in the valleys crisp green rice paddies formed a puzzle and near Nyamasheke the highest slopes were covered with bright green tea plantations.

Continuing south for a few kilometres, we soon headed inland for Kigali. We were very pleased when the main road took us through the Nyungwe Forest National Park. For about 50 km it wound its way through the mountainsides covered with virgin forest. The park is particularly popular for chimpanzee trekking and hiking trails.

As the main road detoured south-east to Butare, we found an alternative route on Open Source Maps and took this north-east to Nyanza. As previously, our journey was punctuated with stops to enquire if the track which was at times narrow and rather unclear, did indeed lead to Nyanza. We saved about 40km in distance but added a very interesting hour to the travelling time.

Arriving in first world Kigali in the late afternoon we drove to the Discover Rwanda Youth Hostel, shuffled vehicles in the limited driveway parking available and set up camp. We were fortunate to meet up with a Swiss couple, Annelina and Mathiou from Luzerne and traded information on routes.

Shopping for gas and groceries and a visit to a dentist took up most of the next morning, where after we visited the Kigali Genocide Memorial, curious to learn more about this horrific period in Rwandan history. We had seen countless Genocide Memorials in our few days in this small country and several people we met referred to the time ‘after the genocide’.

The memorial visit was a sobering experience, indicating the role that Germany, Belgium, the Catholic Church and the French arms industry had played in dividing and arming a traditionally peaceful people, leading to different tribes, and in some cases even friends, slaughtering each other.

The remains of 250 000 individuals lie buried in mass graves in the memorial grounds in Kigali alone. Many others were buried in the other Genocide Memorials around the country. It is estimated that over one million Tutsis were killed by the Hutus between October 1990 and February 1994. After the genocide 300 000 children were orphans and 85 000 children were the heads of their families.

Given the friendliness of most people that we spoke to, the overall tidiness of the country and the level of development in Kigali, we were at a loss to understand how this same nation could so brutally and systematically slay, mutilate and rape their fellow countrymen and -women. If one looks at the modern day Rwandan society, it is impossible to imagine that a genocide of this magnitude could have taken place.

There were also displays portraying genocides that have occurred elsewhere, including Namibia, Armenia, Nazi Germany, Cambodia and Bosnia. The visit to the museum left us feeling depressed about the inhumanity of mankind. I was grateful that South Africa was not portrayed on those walls, thanks to people like Mandela and De Klerk.

With a deadline to reach the Kafue National Park by October 5th to spend time with family and friends, we exited Rwanda the next day for Tanzania, pleased to have visited this fascinating and beautiful country.

5 thoughts on “Small but beautiful Rwanda”