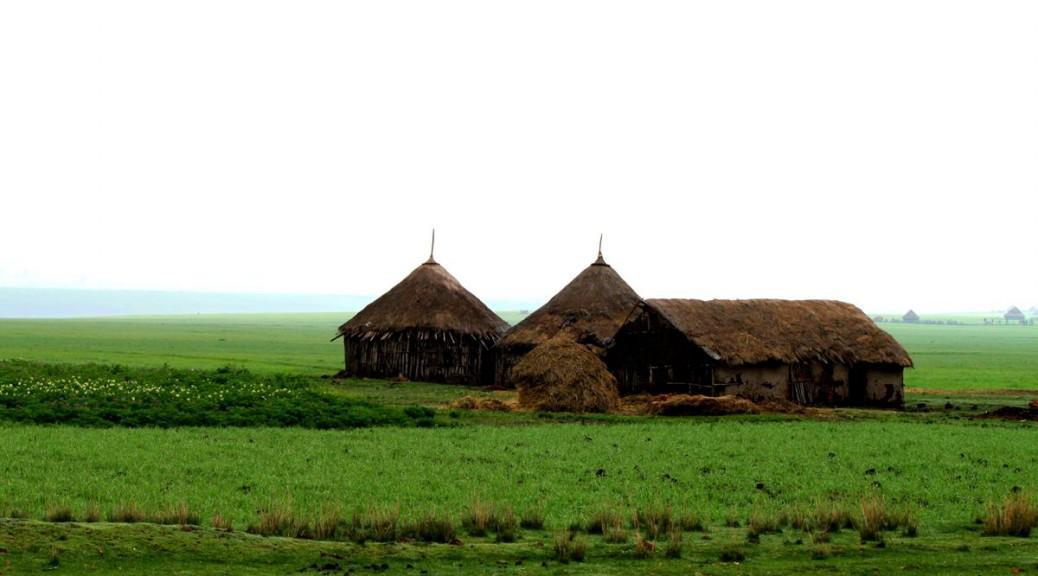 Ethiopia is a chaotic, colourful and picturesque country. It is extraordinary. The Amharic language is unique, they calculate time in units of 12 hours with their day starting at 6:00 in the morning, and follow their unique Julian calendar, which consists of twelve months of thirty days each and a thirteenth month of five days (six days in leap year). Their calendar is seven years and eight months behind the Western (Gregorian) calendar.

The landscape is astoundingly beautiful and the people are interesting, with many different tribes and a rich culture. The countryside has an old-world charm; in short rural Ethiopia looks like a movie set for a film that plays off a hundred years ago.

Rural Ethiopians live mostly in sapling supported clay huts and farmers still plough their fields with oxen drawing wooden framed ploughs. Heavy loads are either carried by women or on donkeys and most people walk or travel by donkey cart. People fetch their water in bright yellow containers from puddles, dams, rivers or wells.

On the roads everything on foot has right of way. Vehicles simply have to manoeuvre their way through the people, cattle, horses, donkeys and donkey carts, none of which makes any effort to get out of the way. In country towns we’ve seen so far, three wheeled tuk-tuk taxis are the only common vehicles. In Ethiopia you don’t get traffic jams but we have been frequently stuck in a cattle jam!

Whilst enjoying this new experience immensely, we have found that it is not an easy country to travel. Distances are huge, the going generally slow and they have virtually no facilities for campers. A ‘campsite’ here just means that you can erect your tent on a piece of ground and if you are lucky, you may get to share some grotty toilets and showers and be free of onlookers. The people are emotionally draining. There are many of them and, whilst friendly, wherever you stop in town or next to the road they swarm around you staring and many ask for money.

Ethiopia is a fertile country and agriculture flourishes. However, a huge culture of entitlement appears to have been created by Western aid, given in response to the drought and famine of the 80’s. Now, often when people see a foreigner they call out ‘farangee’, and many hold out a hand and expect money, when clearly they are not hungry. It’s as if they expect travellers to feed them or act as human ATM’s.

Entering in the south

We entered Ethiopia through the dry south-west and as there was no border post there, had to report to Immigration and Customs at Omorate, about 57 km to the north-east. On the way we passed various tribes who still adhere to their traditional dress; the Omorate women wearing bright loin cloths, beaded jewellery and short, reddish hairstrings.

From Turmi we opted to take the more scenic back road to Arba Minch. We passed some Hamer girls herding their cattle and they wore skin cloths and extravagant jewellery, also with reddish hairstrings.

The landscape had changed from bone dry at the border to bushveld and we now made a rocky, lengthy, slow descent next to a dry riverbed with many wash aways.

Since the Serengeti where we punctured our second rear tyre, we had been experiencing problems with leaking plugs. Now, with the worst of the road behind us, we punctured the rear left tyre. Bad news with two already punctured. Little did we know then that the day would be long and tiresome…

A short while later we again stopped to re-plug the rear right tyre and just a few kilometres further we saw that our left rear was almost flat. A young Ethiopian student happened to be passing on his motorbike and willingly helped to plug the two separate holes. What had been a perfect tyre at the start of the day, now had three holes in it.

A short while later the rear left tyre plugs leaked so we found some shade to change the wheel for a spare that had already been plugged in Zimbabwe. As we had earlier noticed that plugs pulled out because of road torque, Pete had removed the punctured tyres from the rims and secured the internal loop of each plug with heavy cable ties to stop them pulling out. These lasted well on tar, but on gravel, dust was forced in beside the plug and broke the seal.

Stopping at Moyto to buy fresh vegetables, Pete noticed that the rear right tyre was losing air again. About 20 people, young and old, male and female, all excited and jabbering loudly, gathered closely around as Pete re-plugged and pumped the tyre. This was our first experience of Ethiopian curiosity and their claustrophobic concept of personal space.

The landscape was now green and hilly, cultivated like a quilted blanket. This was a more affluent region as we saw a few vehicles and tuk-tuk taxis; however, there was far more livestock than wheels on the road!

As we drove north to our night stop in Arba Minch, it was getting late and with everybody heading home it got busier. Women were bent over under heavy loads, endless herds of cattle, donkeys and goats were herded to shelter and it was clear that they all had right of way. Meanwhile, as our right back tyre kept leaking, we had to stop many times to replug and pump, amidst swarms of excited people. It soon became clear that we would not make it before dark.

We used a record of 18 plugs that day, arriving late in Arba Minch. We pulled up at Swayne’s Hotel with a tyre that was once again almost totally flat. This was the first night of the trip when we chose to stay in a room instead of our tent and a short while later a heavy thunder storm endorsed our decision.

Next day we moved to the hotel’s campsite and Pete spent the day shopping while I did some computer work. We had to buy two new tyres before we could continue our trip and were surprised when they were delivered overnight from Addis Ababa, albeit at an astronomical price. We had all the other tyres repaired with gaitors (which the repair man said would be good for 1000km, depending on the road) and a tube was put into the best of them.

Swayne’s Hotel is close to town and has a beautiful view over Lakes Chamo and Abaya. These are separated by a hill called ‘The Bridge of God’, in an unspoilt area proclaimed as the Nechisar National Park.

Moving north towards the Bale Mountains

With eight tyres somehow now on the vehicle we were ready to move on towards the Bale Mountains. Once again we opted for the back roads, taking a route that rises steeply to over 2 700m to the west of the Arba Minch lakes. It was a beautiful, sinuous drive up the lush mountainside and we spent the night in a charming campsite run by the Dorze community. We left early the next morning with thick mist blanketing the slopes.

Once off the slow mountain gravel we made good progress on asphalt but later realised that we wouldn’t reach the Bale Mountains that night, so started looking for a night stop in Awassa. After various unsuccessful attempts both there and in Sashemane we got a bit desperate to find a quiet place to stay.

Shortly afterwards fortune smiled on us when we spotted an airy forest with beautiful green pastures. We drove in about 700m to a spot nestled amongst the trees and couldn’t believe our luck as we were largely untroubled by spectators; the few who arrived leaving at dark!

We had heard hyena during the night and whilst breakfasting the next morning, a large specimen loped past close- by.

We were amazed at the extent of cultivated land and were lucky to reach Dinsho, the headquarters of the Bale Mountains National Park, by about midday. This allowed us to set up camp and prepare for the cold which inevitably accompanied such high ground.

Peace and quiet in the Bale Mountains

The stillness was like a breath of fresh air and we marvelled at the curious warthog families feeding around our camp and the stately mountain nyala and smaller bush buck grazing close-by.

At an altitude of 3 100m, heavy afternoon rain and hail chilled the air but fortunately we could warm ourselves by a cosy fire that night.

From Dinsho camp we headed for the second highest point in Ethiopia on the Sanetti Plateau, which is situated south-east of Dinsho, still in the Bale Mountains National Park. We were hoping to see one of the country’s endemic large mammals, the Ethiopian wolf, and to our delight came across one feasting on the carcass of a dead cow.

We had lunch at the Tullu Deemtu viewpoint (4377m), hastily packing up when it started sleeting, the icy wind cutting through our thick jackets and beanies.

Returning to Sanetti camp we again saw the same carcass with another, much darker, wolf now feeding. Passing some herders and their cattle, we started to suspect that our ‘wolves’ might in fact be herders’ dogs.

The ranger at the Sanetti camp confirmed our suspicion, showing us photos of the ‘real’ wolves. As it was icy cold and Sanetti camp totally unprotected from the strong wind, we decided to pitch camp in a nearby more sheltered quarry. I was ecstatic when we saw a real Ethiopian wolf on the way there!

With rain threatening we pitched camp at 4 134 m. It was still windy and very cold; at sundown the temperature dropping to three degrees. That evening we were extremely grateful that the rain held off and we could sit by the warmth of a fire. When we crawled into our tent it was minus two degrees and the wind was tugging at our fly sheet….