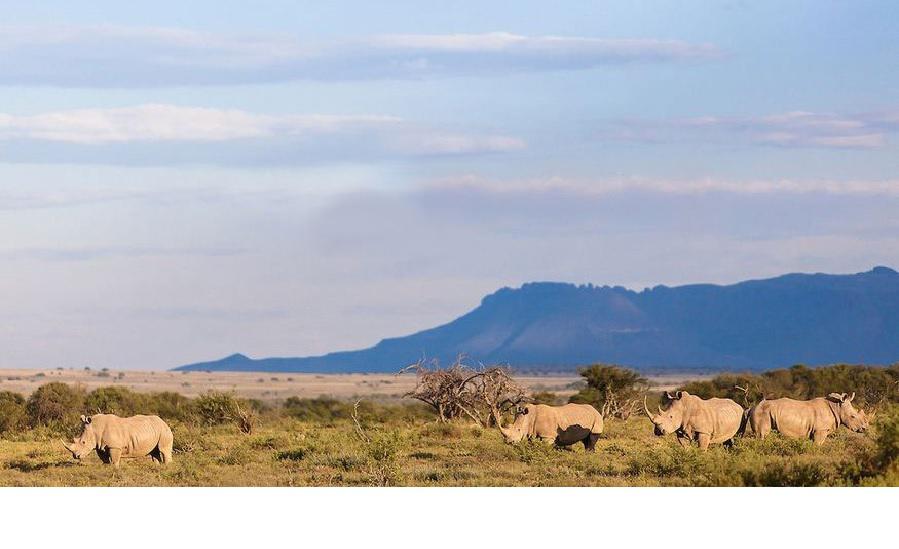 (Text by Bradley Dennis and photos by Jody Bloomer)

Doom and gloom usually make up the news headlines, but it is so nice to hear a ‘feel-good’ story every now and then! One such is news of the birth of a female white rhino in a breeding program which is part of the ongoing fight against the extinction of the rhino. Each rhino birth is exciting as the numbers of these icons of the African bush are under huge threat.

The baby was born in July on Samara Private Game Reserve, located in the Great Karoo region of South Africa. Samara is one of the many game reserves which participate in the conservation and protection of rhinos. She is a healthy and energetic little animal who enjoys spending her time playing in the veld, suckling her patient mother, Moyo, and ever-so-often collapsing exhausted into a heap for a well-deserved nap.

According to Save the Rhino there were approximately one million rhinos at the turn of the 19th century. In 1970, there were around 70 000 and today there are only around 28 000 rhinos surviving in the wild. The Southern white rhino was once on the brink of extinction with only around 50 individuals left in the wild! Currently 75% of the world’s rhinos live in South Africa and it is estimated that there are only 21 000 White rhino adults and less than 5 500 Black rhinos remaining in the wild.

Threats to rhinos include the loss of habitat, population fragmentation, civil unrest and poaching for their horn, which is believed by some to have medicinal benefit. In some cultures rhino horn has also become a symbol of status and wealth; the per kilo black market value being greater than that of gold, diamond or cocaine. Poaching of rhino peaked in 2014 with 1 215 rhino being killed in one single year and this horrendous activity has claimed 25% of South Africa’s rhino population since 2007.

However, thanks to desperate measures in conservation circles, statistics show that poaching has slowed in recent years. A drop in this rate in the Kruger National Park is certainly cause for celebration and indicates that measures to reduce poaching are gaining traction there. However, certain experts worry that this has been offset by increases in the Eastern Cape and Kwa-Zulu Natal, as well as other parts of Africa.

One of the primary reasons for South Africa’s success in conservation has been the strong alliance between private and public sector players. Some 20-25% of rhino populations in South Africa are now privately owned, a much larger margin than in the past.

The private management of this endangered animal allows for more focused care and security. The greater funds available at these private reserves help to further accommodate species conservation and safe-keeping. South African citizens and private owners are developing innovative strategies to deter poachers, which includes dehorning and introducing dye or even poison into rhino horns.

How to get involved

Today we are still very lucky to be able to see rhino in the wild. We can all contribute to prevent what would be a sad day when we can only show photos of an extinct species to our children.

One thought on “Celebrating a baby rhino”