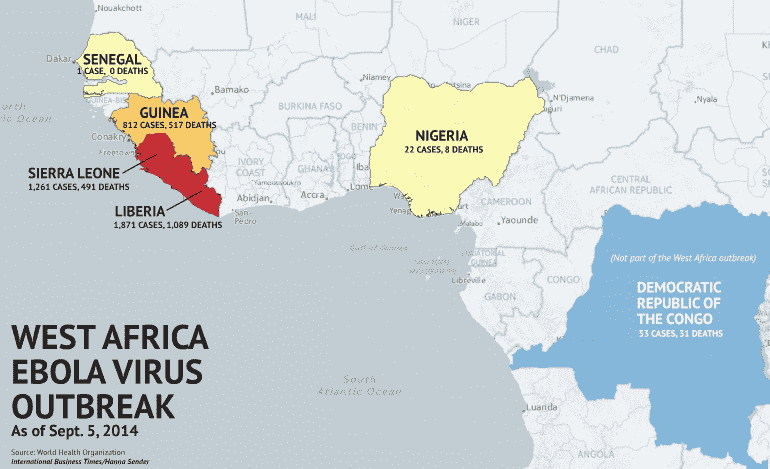 Having a hand held device pointed at you by a border official (who normally aren’t the most friendly or helpful specimens) can be a scary experience.  Since the outbreak of the Ebola epidemic in 2014 all travellers must have their temperature taken at border crossings and at airports in an attempt to detect possible infection and prevent the spread of the virus.

History of the virus

The Ebola virus was first discovered in 1976 by a young scientist in Antwerp after testing a blood sample from a Belgian nun who had fallen ill at a small mission hospital in Yambuku, a remote village in the Belgian Congo.  That scientist, Professor Peter Piot, is today the Director of the London School of Hygiene and Tropical Medicine.

In that case Yellow fever or Typhoid was suspected but both tested negative. Using the electron microscope they could see that the virus had no similarities with Yellow fever but looked like the extremely dangerous Marburg virus. The team who shortly afterwards went to Yambuku to investigate decided to name the new pathogen after the nearest river; the Ebola River. (It later turned out that the map was inaccurate and the nearest river was actually different.)

For decades Ebola flared up sporadically in rural African villages but the recent outbreak in 2014 turned into an epidemic. It began in the densely populated border region between Guinea, Sierra Leone and Liberia and soon spread to Nigeria and Mali, with isolated cases occurring in Spain, Germany, the US and even Scotland. Those affected in the latter countries were mostly health workers who had been in contact with African Ebola patients.

According to the World Health Organisation (WHO) at least 8 386 people have died so far from Ebola, which is one of the world’s most deadly diseases. It is a highly infectious virus that has in the past killed up to 90 percent of the people who caught it and is so infectious that patients need to be treated in isolation by staff wearing protective clothing.

Although Ebola is severe and often a fatal disease, statistics from WHO show that 1 out of 3 patients currently survive Ebola. Getting medical care as soon as possible makes a huge difference in fighting the virus.

There is no licensed treatment or cure for Ebola yet, but good news is that an experimental vaccine is showing very promising results and a clinical drug trial is under way to determine if a medication already used to treat other viruses could help sufferers.

Not the biggest killer

However, one must remember that TB and Malaria are still the biggest killers in Africa. In 2013 an estimated  1.5 million people died from TB and 580 000 from Malaria with a child dying every minute from the latter.

Ebola can be caught from both humans and animals. It is transmitted through close contact with blood, secretions, or other body fluids. Infection has been documented through the handling of infected chimpanzees, gorillas, fruit bats, monkeys, forest antelope and porcupines found dead or ill in the rainforest.

At burials mourners can also transmit the virus if they have direct contact with the deceased, and transmission through infected semen can occur up to seven weeks after clinical recovery. Healthcare workers have frequently been infected while treating Ebola patients. This has occurred through close contact without the use of gloves, masks or protective goggles.

Early on, symptoms are non-specific, making it difficult to diagnose. The disease is often characterised by the sudden onset of fever, feeling weak, muscle pain, headaches and a sore throat. This is followed by vomiting, diarrhoea, rash, impaired kidney and liver function and, in some cases, internal and external bleeding.

Symptoms can appear from two to 21 days after exposure. Some patients may go on to experience rashes, red eyes, hiccups, chest pains, difficulty with breathing and swallowing.

Ebola and Malaria have many of the same symptoms, including fever, dizziness, head and muscle aches. Malaria is caused by bites from infected mosquitoes while Ebola can be contracted only from the body fluids of an infected victim (animals or people).

What you can do to help yourself prevent contracting Ebola

Special forces of healthworkers from Doctors Without Borders (MSF) , the Samaritan’s Purse and many others from all over the world fight side by side in the field with local doctors and nurses, ambulance drivers and burial teams.

Taking the temperature of all travellers at border crossings is just one of the measures used to try and combat the spread of Ebola.