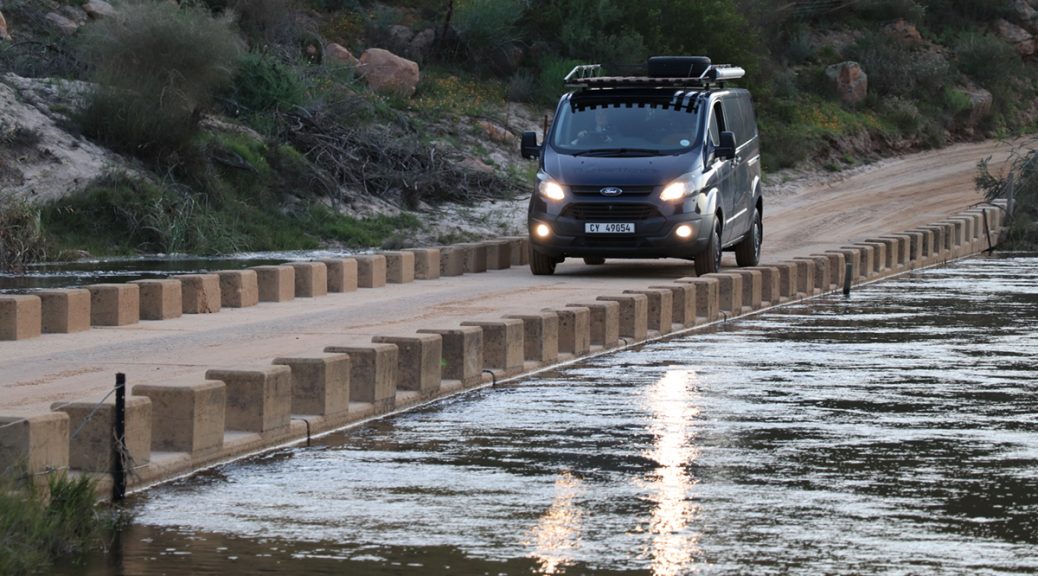 Travelling in a converted van offers you the convenience of a caravan in a quirky package. More affordable than an expedition vehicle and more rugged than a motorhome, a van is a holiday home on wheels. What’s involved in living the #vanlife? By Magriet Kruger

When Leon and Sharon Kriel came across #vanlife on Instagram some years ago, it seized their imagination. Typical pictures show travellers lying in bed, jaw-dropping scenery framed through the doors of a van. Or perhaps sitting on the van’s step with a chilled drink from the built-in fridge.

“We saw the beautiful images on social media and thought it looked awesome. Converting a van for travelling became a pipedream,” Sharon says. As keen campers, the couple like to get out of the city at every opportunity. With the addition of King, their rescue dog, to the family, they were looking for a new way to travel.

“We’d considered a 4×4 with a roof tent but, to be honest, I wanted something different,” Leon explains. “Vanlife is somewhere between camping and travelling in a motorhome. A motorhome is much more luxurious, but not nearly as mobile as our van.” What’s more, by buying their van second hand and doing the conversion themselves, it worked out to be more affordable.

If you’re wondering if #vanlife is for you, Leon and Sharon’s experience may answer a lot of your questions. To begin with, they looked for a van that would work as their second vehicle. It had to be easy to drive, low in fuel consumption and fit within their parking space. “We like remote mountain passes and dirt roads, so it also had to be able to handle gravel tracks.”

They found their Ford 2.2 diesel transit van on Gumtree. “We went out to test drive it and before going more than a few blocks I knew it was the van for us,” Leon recalls. “The van’s suspension is strong enough to handle corrugated roads. And it has a long wheelbase, about an extra 50-60cm, so we could fit in an extra length bed,” he says.

“When we bought it, it was a basic panel van that an IT company had used for installing computers. So it really was an empty shell.” Right after getting the vehicle they threw a mattress in the back and headed off on their first trip. The experience confirmed their hopes. Within two months they’d built in enough comforts to travel along the coast from Cape Town to the Drakensberg.

Even before getting their van, the couple pored over pictures of other conversions to figure out what would work for them. One of the first things Leon did was to thoroughly insulate the interior with an eco-friendly insulation foam. For the flooring he put down rubber mats, on which he layered plywood topped with laminate for the effect of wooden floorboards. A wood veneer on the inside rounded off the look and makes the van easy to clean. Sharon decorated the ceiling with maps of southern Africa, which they plan to mark with all the places they visit.

In addition to shelves, Leon built a framework for the bed, which sits on three sections. The foot lifts up to reveal kitchen utensils as well as their ground sheet and hammocks. The middle section hosts storage and the battery that powers the fridge. The top third, accessible from the back doors, is where they keep their clothes. A roof rack with sliders is used to store their camping table, as well as solar panels for topping up the battery. Not only does this save space in the interior, it also offers a secure lock-away system.

The benefits of #vanlife

“When we pack to go away, it’s basically just clothes. The van has its own equipment and gas bottle, so it’s always ready to go. Because we’ve fitted out the interior with our own things, we always sleep well. We’re essentially driving in our spare bedroom,” Sharon says.

With the van’s built-in conveniences, they find it’s a huge step up from camping. “The fridge is wonderful and the awning has been really great. When it’s raining, like on a recent weekend away, Leon could whip up French toast outside and we could sit down to a meal.” She also loves being able to make coffee inside before having to face the world.

The van’s worked especially well for holidaying with their dog. King has his own seat in the middle, although Leon complains that he takes up most of the bed at night. Because the ventilation is good, he can also safely wait inside if they stop off somewhere. In fact, Leon says their dog has become so attached to adventuring in the van that under Lockdown they would open it up just for him.

Under social distancing conditions, the van has also proven its worth. “When we go and visit family now, it makes it easier to adhere to restrictions – we can eat in our own space and open it up to the outside.”

Is overlanding in a van for you?

A van is great for people who want to enjoy the freedom of camping with a few more luxuries.

Leon points out it’s even more convenient than a roof tent: “I just slide the door open to get into bed.” What’s more, you can easily move from one spot to another without the palaver of breaking up camp. Better view elsewhere? It’s a matter of minutes before you’re admiring it from the van’s open doors.

They love the versatility of their vehicle, which is equally at home in a formal campsite or a lonely stretch of beach. “Because we’ve got solar panels, we can keep our fridge and phones charged. If we’re going somewhere remote, we just have to take water along.”

“A friend and I recently went to a yoga retreat in the van. It was amazing because I could easily set it up myself,” Sharon says. Thus far, their longest trip has been around three weeks, but the couple dream of doing a three-month overlanding expedition. But they admit that their conversion would be challenging for full-time #vanlife. “Ideally you’d want to be able to stand up inside, have more storage, have somewhere to sit at a table,” Leon says.

But for now, the van answers all their needs. They’ve made the transition from campers to vanlifers and there’s no looking back.

One thought on “Overlanding in a van – is #vanlife for you?”