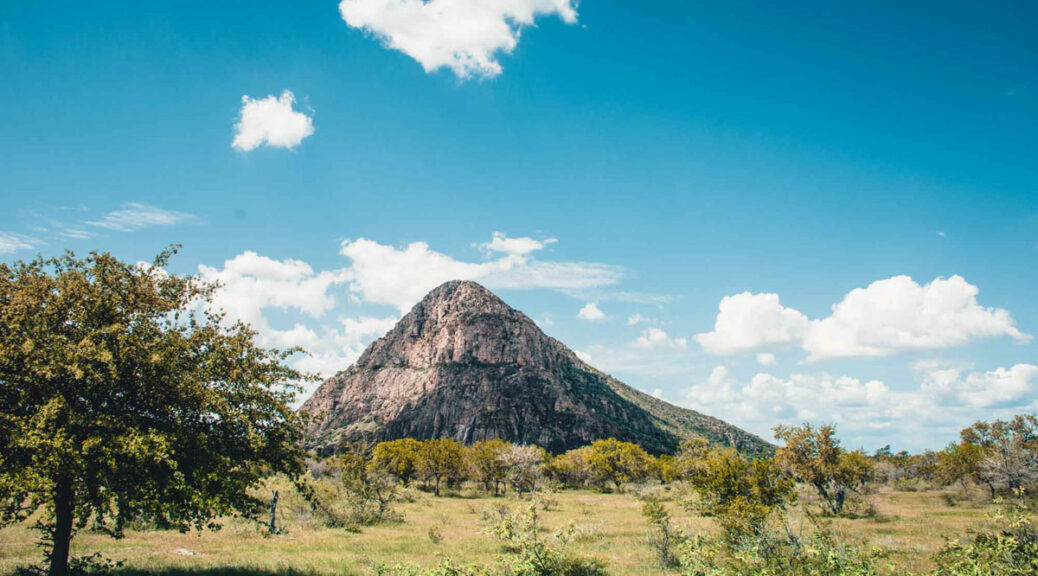 The rutted road north from Maun towards Shakawe leaves much to be desired. But the courageous few who drive that potholed stretch of tar to Tsodilo will be rewarded. So says Melanie van Zyl after visiting Botswana’s rock art ‘museum’.

Most people visit Botswana for its wealth of wilderness. Did you know that nearly 40% of the country consists of protected areas? The national parks, reserves and wildlife management areas allow animals ample space to roam. They combine to make this landlocked country an almost surreal safari destination.

Among the many parks, there are just two Unesco World Heritage Sites in Botswana. While most tourists flock to the Okavango Delta, Tsodilo Hills remains off the beaten tourist track.

Arising from a straight, spirit-level landscape, this smattering of hills is visible from a vast distance. Dubbed the Louvre of the desert, a revered site and a place of worship for many, the hills rise emotively from the Kalahari plains.

What is there to do at Tsodilo Hills?

Declared a World Heritage Site in 2001, Tsodilo Hills safeguard more than 4,000 rock art paintings. Stone tool evaluations tell us that Bantu people arrived here as early as AD500. Still, the intriguing layering of rock paintings and other archaeological relics suggests that other ancestors occupied this area for as long as 100,000 years. According to Unesco, “The authenticity of the rock art in terms of materials, techniques, setting and workmanship is impeccable and, other than some impact caused by natural deterioration and visitors, it remains as original as the time of its creation.”

Curiouser still, Tsodilo is somewhat removed from other rock art sites. The next nearest known site sits 250km away.

The Tsodilo Hills comprise three prominent peaks, called Male, Female and Child. Visitors can soak up the undeniable spirit of this sacred space on tour through the hills with a regional historian. Local guides – many of them of San descent – will wind you through the koppies on a more culturally-inclined walking safari.

How can you explore the site?

The most accessible (and thus most popular) trail is the Rhino route, which rings the medium-sized Female Hill. This hill is so named because it is home to several ancient rock paintings on themes of fertility. This path takes you past the legendary Van der Post Panel, ochre-coloured rhino renderings and even imagery of whales and a penguin. These have to be the most intriguing since the closest of these maritime creatures are at least a thousand kilometres away!

However, linger longer, and there are many more ways to walk.

This country is mostly flat, but Tsodilo boasts Botswana’s highest peak. If you want a challenging hike, the Male Hill summit is a hit. The stroll starts easily with the Lion Route. Pass its eponymous rock painting, and then a steep ascent lies ahead that takes you up to 1,489, above sea level.

There is also an interesting little museum. However, it was looking a little unloved on my last visit.

How do you visit Tsodilo Hills?

Tsodilo Hills lie roughly three hours north of Maun, and the paintings are easily accessible from the footpath.

Declared a National Monument in 1927, the responsibility for looking after Tsodilo Hills rests with the Department of National Museum and Monuments in collaboration with the Tsodilo Management Authority. This is an independent advisory group comprising the Tsodilo Community Trust, community-based organisations, NGOs and selected critical government departments.

Entry costs BWP50pp, and a guided walk along the Rhino Trail (the shortest and most popular option) BWP120pp. Guiding fees go up the longer the trail.

The campsite underwent some maintenance in 2020 and is hopefully in better nick as a result. There are flush toilets and a shower, but no power. Camping costs BWP130pp.

For a waterside stay in the Okavango Panhandle nearby, check into Xaro Lodge. You’ll likely tick off Pel’s Fishing Owl while in the area, which is a big plus. It also delivers on quintessential Okavango immersion because getting there requires a boat trip from Drotsky’s Cabins. The lodge can also arrange guided trips to the hills.