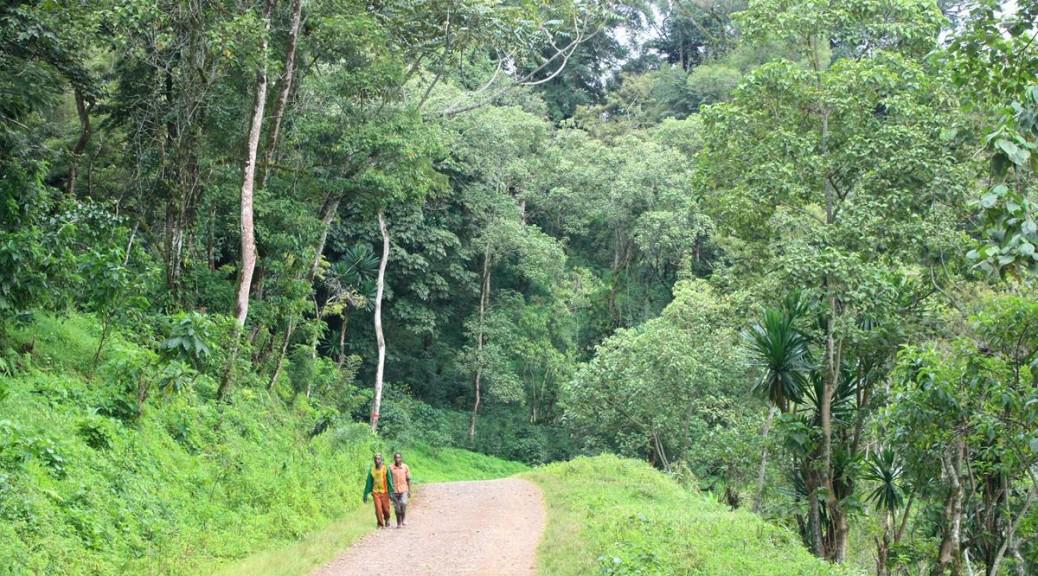 After getting seriously stuck in the mud twice, we headed up the valley again, retracing our tracks because the road was washed away. We soon reached two flattish but very muddy sections, the first of which we traversed with no trouble. The second was however about 40 metres long, slightly uphill, with deep, muddy pools filling old vehicle tracks. By Karin Theron

The soil next to the tracks was reduced to slush by animals. Passage on the right was precluded by large boulders and on the left complicated by a slippery and steep drop into the adjacent field. Exhausted, filthy and cold, I prepared dinner whilst Pete walked through the mire, planning the route he would take in the morning and placing rocks strategically to enable the Hilux to ride over those he couldn’t move.

It was as if the circus had come to town! A crowd gathered around me as I cooked but fortunately slowly dispersed as night fell. We were camped in the middle of the road but knew that no vehicles would be passing and the sight of us in the middle of their through-way didn’t seem to bother the villagers, although often their animals were spooked by our strange presence. Washing off the worst of the mud in the puddles, we had enough water to clean up and spend a peaceful night in the rooftop tent.

The next morning we managed to get through the mud section successfully and reached the point we had marked on the GPS as being the worst. Stopping, we prepared the road surface carefully, placing stones in ruts into which we could slide and minimising the height of protruding rocks by building up around them. Once again passers-by spontaneously assisted us, and hitting the incline at good speed, the wheels started to spin but we bounced our way up.

The initial muddy obstacle we had encountered on the way in received similar planning and treatment, and despite being downhill, it was still challenging. After we had bucked our way through, the final section somewhat sideways, we breathed a huge sigh of relief and began the long journey out.

We had gone to the Kaffa region in search of wild coffee; instead we found how helpful and kind the Ethiopians can be. As partial recompense, we also noticed a few stands of indigenous coffee on our drive out.

It was a long day’s drive retracing our steps to Bonga and then to Jimma before we could turn south for Chida, passing through one village after the other, back-to-back with people. One settlement was predominantly Muslim and we saw many women in colourful, long flowing robes, many of their faces covered in burkas.

It was getting late and shortly after we passed through this village, hopes low of finding a good bush camping spot, we entered a forested area with a green patch of grass, somewhat off the road. Here we set up camp, pleased to only have three passers-by staring at us. Fortunately two sides of the Hilux were sheltered by bush so we were reasonably private.  One of the onlookers indicated that he wanted to act as a paid guard, but we declined. I had a wash in our shower tent and we were enjoying dinner when a passing truck stopped.

Moving camp in the middle of the night

Pete walked around the Hilux and saw three men, armed with assault rifles, approaching in his torch light. He greeted them and shook hands. Some animated Amharic dialogue followed, none of which we understood, but unmistakable was the graphic finger-drawn-across-the-throat gesture.  From that we gathered that it was not safe to camp because of a threat from some of the local villagers and they wanted us to move back to the village where they would guard us.

We were at a loss to know what to make of this and it was the first time in Ethiopia that we had indications that we were not safe.  We really didn’t fancy packing up camp and we definitely didn’t want to stay in the noisy village for the night, but didn’t have much choice than to move.  So we finished our dinner and packed up whilst the three men positioned themselves at different corners of the vehicle, making us suspect that they were ex-military and not the normal, curious Ethiopians.

We thanked them but indicated that we wanted to push on to Sodo. After a brief demurral, they accepted that without them making any requests for money, and we drove off.

It was eight ‘o clock and pitch dark. We knew we wouldn’t make Sodo, so hoping to find a less exposed bush camp spot off the road, we drove for about an hour, imagining that we had a long night ahead of us. However, shortly before we entered Chida we saw a track leading off right, just before the Gajeb River bridge. Pete walked down with his torch and we could not believe our luck when it turned out to be the perfect bush camping spot, on the river bank and out of sight of the road.

We opened the rooftop tent and had a peaceful night’s sleep, soothed by the soft sound of the river flowing past.

Needing to exit Ethiopia to meet schedule and visa commitments, we now decided to stick to the tar roads as, especially with the language barrier, information on minor roads is virtually unavailable. This meant we had to head further east to Sodo before turning south past Arba Minch (where we had already stayed over for two nights) and then west to Turmi and Omorate, our exit point.

As if we hadn’t wasted sufficient kilometres already, we were re-directed off our course onto a good gravel road signposted to Sodo. This new road took us past the impressive new Gibe III Dam on the Omo River which, together with the series of Gibe Dams, feeds the third largest hydroelectric scheme in Africa. Presumably the detour was necessary because the dam had flooded the old route.

We have heard from fellow travellers that the safest way to experience the tribes of South Omo is to either get a guide yourself or join a tour. However, we didn’t fancy paying the 600 USD per person for this experience and, whilst we had initially planned to drive through this region, adverse reports on black cotton soil during the rains around the Mago National Park made up our minds. We had had quite enough of being stuck in the mud. Indeed we later heard of travellers who had attempted to enter the region, but had to turn back.

So I had to be satisfied with the few traditional people we saw whilst passing through Turmi and Omorate, even though I would have loved to see the Mursi with their lip plates.  Apparently more than 20 culturally unique tribes live in the dry South Omo Valley, some of which still perform body scarring and body painting. Some travellers have, however, commented that sadly the South Omo Valley with its tribes has become a bit of a human zoo.

After clearing customs and immigration at Omorate we crossed the new bridge, being forced to stop by an aggressive, necklaced and bangled tribeswoman who stood her ground in front of the vehicle. Only as she grudgingly moved to the side to ask for something, were we able to force our way through, having had enough of demands from strangers by now.  Perhaps this behaviour was unsurprising in this harsh, dry region. Here the mainly pastoral Omorate people lead Spartan lives, living in round wooden shelters clustered together in villages, fenced by thorn branches.

Looking for the road to the border, we battled through very dusty fesh-fesh (deep sand and fine clay dust) with numerous track options. For the first few kilometres no clear route existed and we were thankful for fellow traveller’s GPS tracks. We had to keep our speed up to prevent bogging down and got a huge fright as we crossed right angled tracks hidden in the powder. This caused a series of major bounces, luckily not breaking any spring leaves but perhaps causing damage to our shocks.

Finally we were happy to reach the last checkpoint on Ethiopian soil and, after a glance at our passports, we were waved through to Kenya.

Ethiopia is beautiful, fascinating and very different from the other African countries we have visited. It has an ancient and rich culture, leaving us puzzled why its technological advancement is still perhaps a century behind what we are used to. Prime examples being the farming methods and the predominant lack of flush toilets and water on tap.

Yet the standard of road engineering is high, considering the stupendous passes that we drove through. There are some excellent tarred roads, albeit clogged with animals and people to whom the traffic must yield.

We had a wonderful time with no harassment by police, many of whom would stiffen to attention as we waved and give us a smart salute. We encountered only one, very friendly, traffic officer.  In our opinion it is the most picturesque country in southern and east Africa; we were literally glutted with beautiful scenery.

However, after six and a half weeks we were rather exhausted by the difficult driving conditions, the need to constantly seek out suitable places to spend the night and the number of demanding people. It was time for us to move on down the west side of Lake Turkana, en-route to Uganda.

6 thoughts on “Heading for south-west Ethiopia”