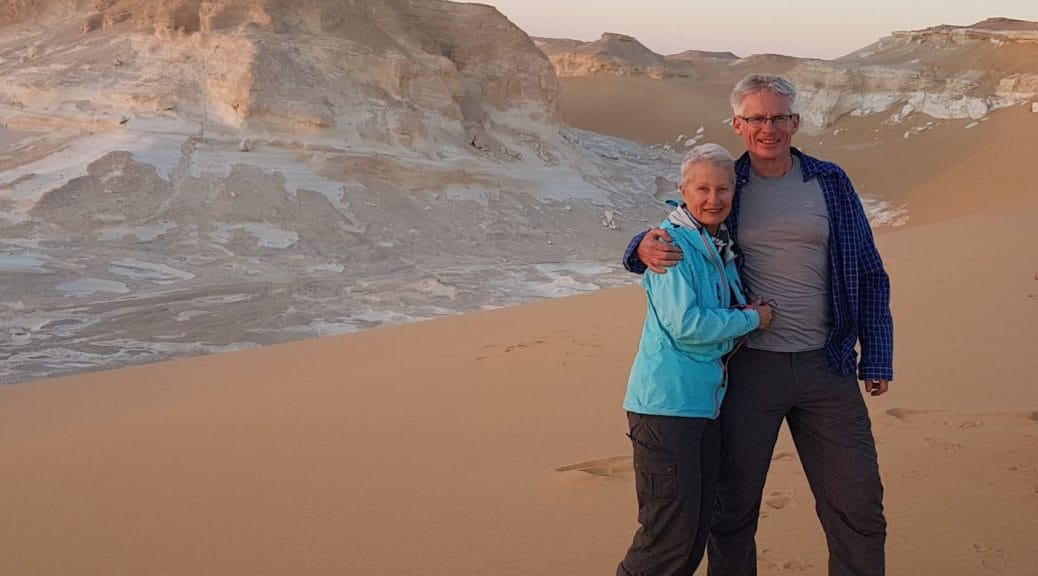 Dreaming of exploring Africa by bicycle? Learn what it takes from the retired couple who tackled two continents on two wheels.

Retirement can either be a time to slow down or if you’re anything like the McNultys, a new era of adventure and discovery. Rather than sit at home and let the years slip by, Knysna-based couple Peter and Colleen bought one-way tickets to Amsterdam in 2017, hopped aboard a pair of Koga bikes and started the long ride home. For a year and a half, they pedalled through 20 countries (12 in Africa), covering 20,783km in total. They embraced each trip across the border as a fresh opportunity to savour new experiences, form connections and make lasting memories.

This inspiring couple reveals the joys and challenges of cycle tours, what preparation entails and why you shouldn’t believe everything you hear on the news.

1. Why did you choose to cycle the continent?

Peter: It all goes back to 1988 when I was living in the UK. I was planning my return to South Africa and decided that I wanted to cycle back. I asked my brother to come with me, but he had just met a lady. His options were to either join me for a year-and-a-half or head back to Australia and ask for her hand in marriage. He decided that she’s far better looking than I am, so he went back, and I shelved the idea. I didn’t have the confidence at that stage to do it on my own. Then, about five years ago, I said to Colleen, “If I don’t do it now, I never will.” It had always been a big dream and I didn’t want to be on my death bed wondering what it would have been like.

Colleen: When he told me “I want to ride from Amsterdam to Cape Town and I’d like you to come with”, my initial reaction was to say, “You can send me a postcard”. It took about 18 months before I said yes! I told him that there would be a few provisions: as little gravel as possible and we go at my pace. And he met those criteria! I also realised that if I didn’t go with, Peter would come back with these amazing stories and I wouldn’t be able to relate to them. That was the deciding factor.

2. What were the main challenges you faced?

Peter: There really weren’t that many challenges. I got malaria in Malawi and even that wasn’t a challenge because it was diagnosed very early. There’s always a positive side to everything and, in this case, it was the timing. I got sick just as the Fifa World Cup started, so I had 11 rest days of watching football, drinking beer and getting spoiled! In general, the trip went a lot smoother than anticipated. We had people stop us wanting to know what two silly old buggers were doing on bicycles riding through Africa, and they would always help out and point us in the right direction.

Colleen: Finding quality food was difficult. Although beef was available further south in Africa, quality meat and vegetables were scarce. Ethiopia was also a struggle because kids shouted at us, threw stones and demanded money. This would probably have been different if we had been in a car. That said, it’s a really beautiful country and we never felt threatened.

3. What does it take to cycle the continent?

Peter: We did very little as far as planning goes. We knew that we wanted to depart from Cairo in autumn and in what direction we were headed, but that was about it. We felt that if we planned too much we might become fearful and give up. So, we just winged a lot of it! We had panniers on our bikes for transporting luggage and I carried a rack pack which carried our tent and other stuff. My bike averaged about 55kg including luggage and Colleen’s was about 45kg. As for bike maintenance, we did a little ourselves but not much. There’s always someone under a tree somewhere ready to sort you out.

4. What do you know now about overlanding in Africa that you wish you had known before?

Peter: The border posts were my biggest fear and they turned out to be an absolute breeze. We were welcomed! At one border post in Chirundu, Zimbabwe, they closed the visa office and told the people waiting that they would be back soon. They wanted to get pictures with us, their friends. And so, we went outside with all the officials. I wish we had known that crossing the border wouldn’t be as daunting as we thought it would be.

Colleen: It was so easy because we never had to queue. Cars and trucks were waiting to go through the border posts, and we would just zig-zag through, go right to the front, park our bikes and get our passports stamped.

Also read: Tips for hassle-free border crossing in Africa: before you leave

5. Do you have a stand-out moment or story that you can share with us?

Colleen: When we were in Cairo, Peter was in contact with another cyclist who invited us to go dune surfing in 4x4s with friends of his. We did that over a weekend and it was absolutely amazing! In the white desert in Egypt, the stone formations are exquisite. That was really outstanding.

Peter: For me, it was an encounter we had cycling in the Zambezi National Park, Zimbabwe. We were coming down a hill into a dry riverbed and Colleen said we should look around because we were in elephant country. Ten seconds later, there was a huge rustle and a herd of elephants in the trees behind us took off. They heard us and got as much of a fright as we did!

6. How did T4A’s navigation products help you on your trip?

Peter: Tracks4Africa made sure we never got lost! When we weren’t quite sure of routes or wanted to find things to see and do, we just had a look at our T4A GPS maps. That was one thing we could always rely on. We’ve got an updated version now that we’ll use on our upcoming trip.

7. What advice do you have for someone who plans to cycle across Africa for the first time?

Peter: Don’t be scared! Go with the flow. In the months before you leave, stop reading and watching the news. Ignore everything that people say – it’s sensationalism. Africa is a wonderful continent. Explore and embrace it!

Colleen: And respect the cultures. For example, in Muslim countries, I always wore a t-shirt with sleeves and long baggy pants to make sure that I fit in with their culture and way of life.

8. In what ways did this trip change your lives?

Peter: Personally, it has made me more accepting of people and a lot more patient. Because you’ve got to be patient in Africa. Everything moves as fast as people want it to move, so you just hang around and wait. And I think I’m still like that.

9. You’re about to embark on a similar, albeit shorter journey, this time in your Toyota Hilux. What do you expect will be the main differences between this trip and the first?

Colleen: A soft seat! And no more bicycle pimples, they’re eina! We’ve got a fridge in our Hilux so this time we will have cold water. It’s tough riding through Africa with temperatures reaching the mid-forties and then drinking warm water; it just doesn’t quench your thirst. So, having cold water is going to be a luxury. Plus, driving longer distances means we will get to proper supermarkets faster. Being in a bakkie will allow us to wild camp more often as we are able to drive further off the road, have a rooftop tent and enjoy the open spaces. And we’re also really looking forward to catching up with all the people we met last time.

Whether you travel Africa by bicycle, 4×4 or even on foot – T4A’s GPS Maps on SD card will get you to your destination every time. Featuring over 1 million roads and thousands of useful points of interest, our maps are comprehensive and detailed enough to accommodate every trip and type of traveller. Buy the latest version online to travel Africa informed.