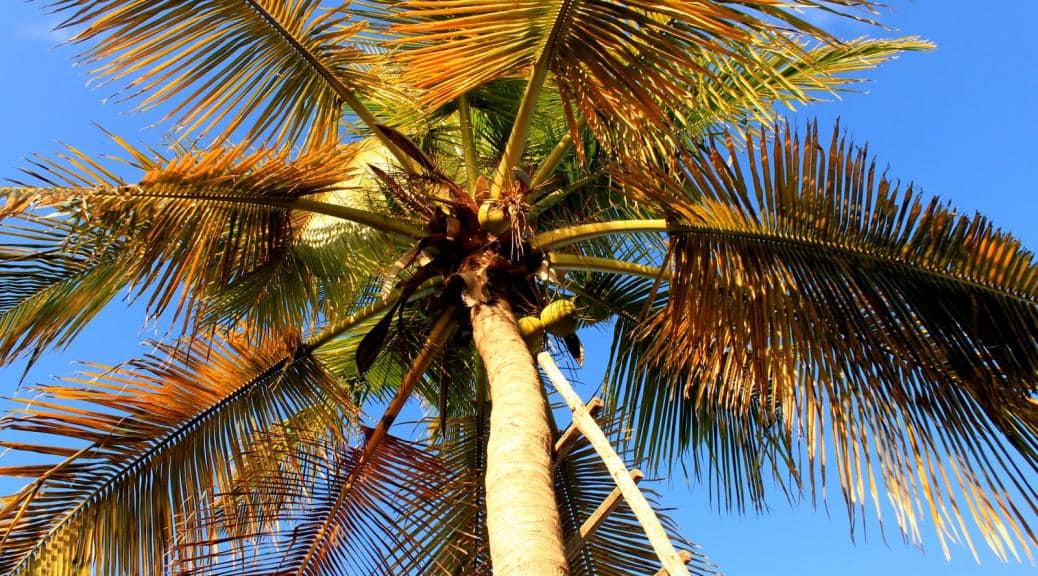 A half moon shed its soft light over the dark stillness of the lake in front of us, with the occasional drifting clouds dimming its rays. The night was almost dead quiet! Just the faint lapping sounds of water caressing the shore at our feet and the odd splash of hungry kingfish prowling the waters in search of prey. Stars shone in abundance with just one red manmade light, a radio mast, visible far away across the shores. We both sat there in awe of the peace and beauty, reflecting on our luck to find such a spot.

That morning at daybreak we were up to complete and post the blog using the local WiFi connection at Montego Resort in Praia do Xai-Xai. After breakfast we headed for Zavora as we were still in search of perfect snorkelling conditions. A quick foray into the obnoxious Xai-Xai Saturday traffic persuaded us that our shopping needs weren’t that urgent and we hit the EN1 north, stopping along the way to fill up the snack box with cashew nuts.

A stretch of lakes

Approaching Quissico, we were both struck by the vista unfolding towards the coast; the ground dropped away to near sea level as we gazed down upon a carpet of coconut trees which lined the broad perimeter of a series of elongated blue lakes. 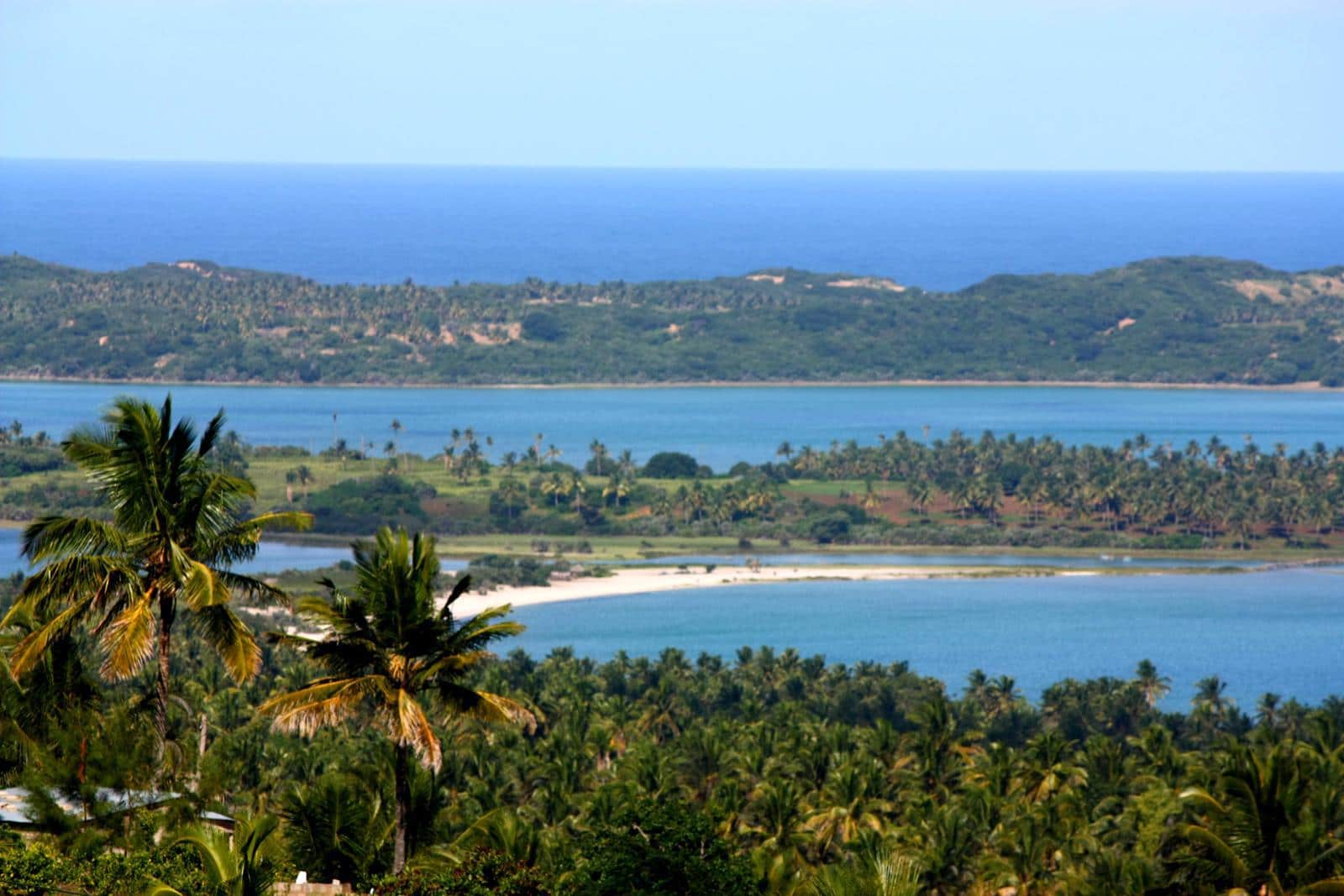 The view over the lakes that lured us to Blue Lakes Island Resort.

Pete passed this spot on his motorcycle journey last year, wishing to explore the dirt track, but desisted because of the very thick sand. With no such impediments now and little discussion necessary, we did so.

At times the track consisted of a deep gully, wide enough for just one vehicle with the steep banks over three metres high. Luckily there was no oncoming traffic. Once at lake level we passed through idyllic villages nestled below the coconut groves as we wound our way towards Praia Do Sol Campsite. 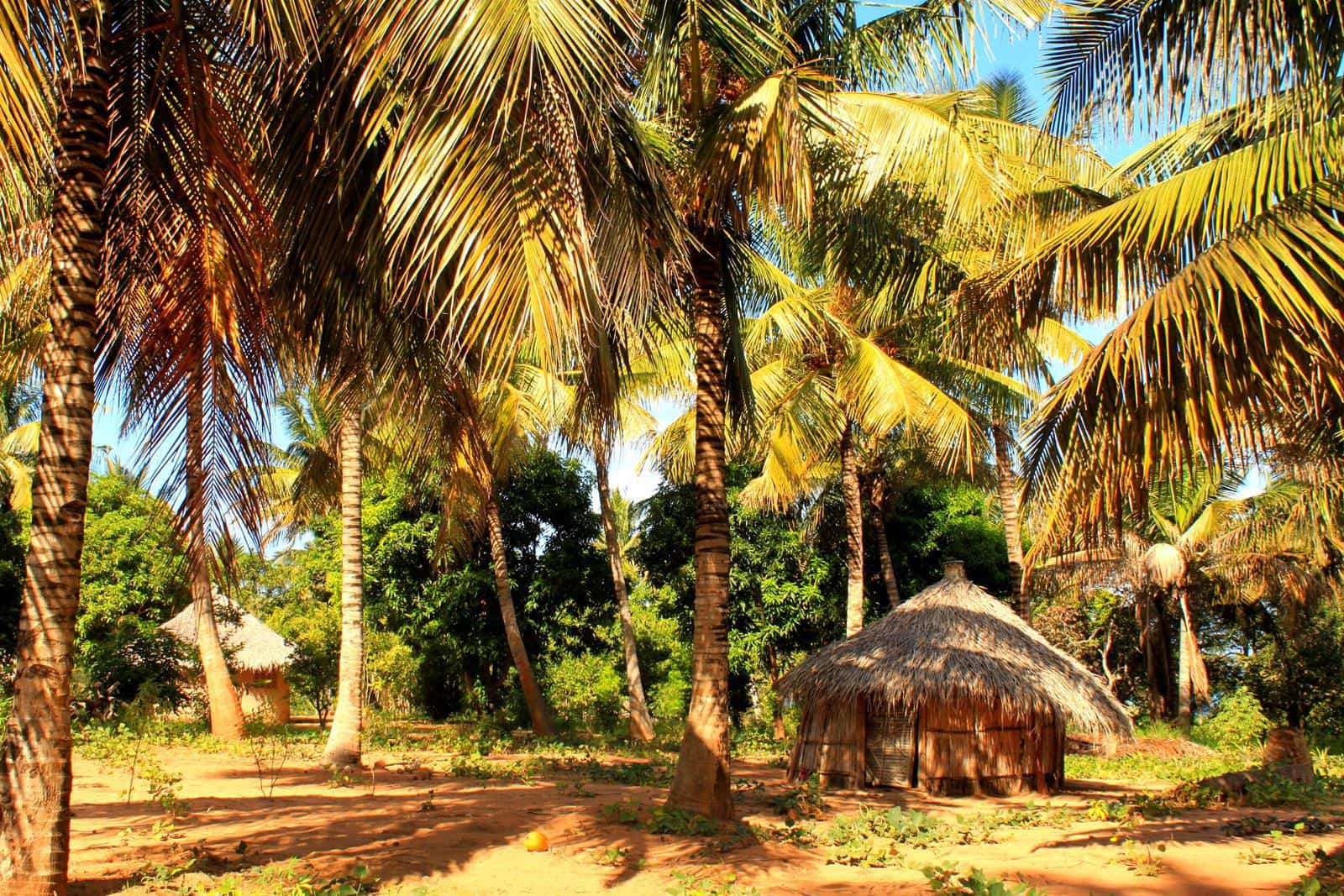 A reed house in one of the quaint villages we passed.

Obviously very few vehicles had been along this track and we weren’t surprised to discover that the camp was derelict. We retraced our steps, gunning the engine to climb the steep, sandy track with hard tyres.

As we neared the crossing between Lakes Nhamaiane and Massava again, we decided to drop in and find out what Blue Lakes Island Resort, which wasn’t yet on Tracks4Africa’s map, offered. Paradise! 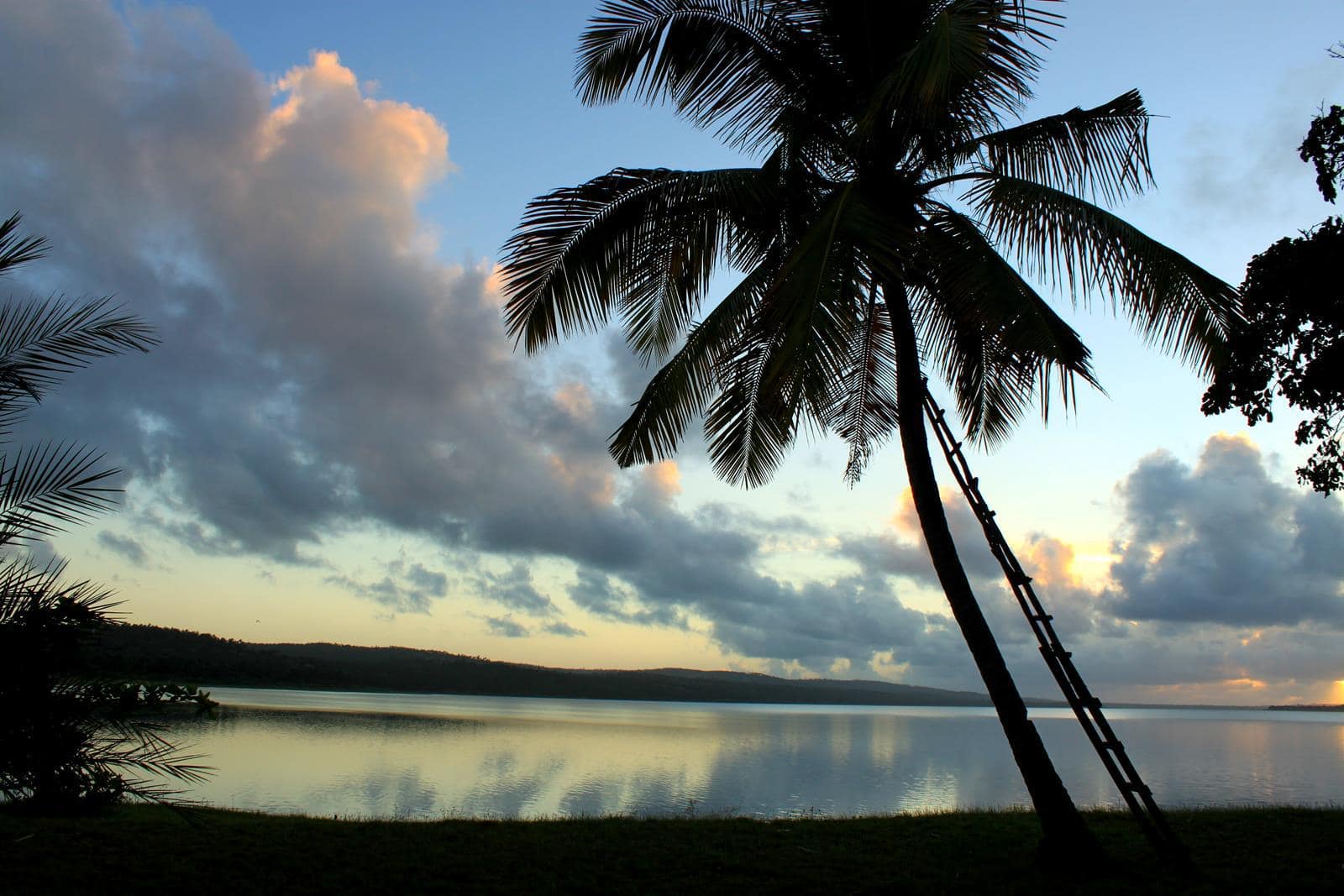 Tertius came out to greet us and it took just a few minutes to decide that Zavora would still be there in a few days’ time. We set up camp under shady trees and coconut palms, a few metres from the edge of Lake Massava. This group of lakes have a narrow, distant connection to the ocean, allowing in enough salt water to prevent mosquitoes from breeding and permitting the survival of some sea species. 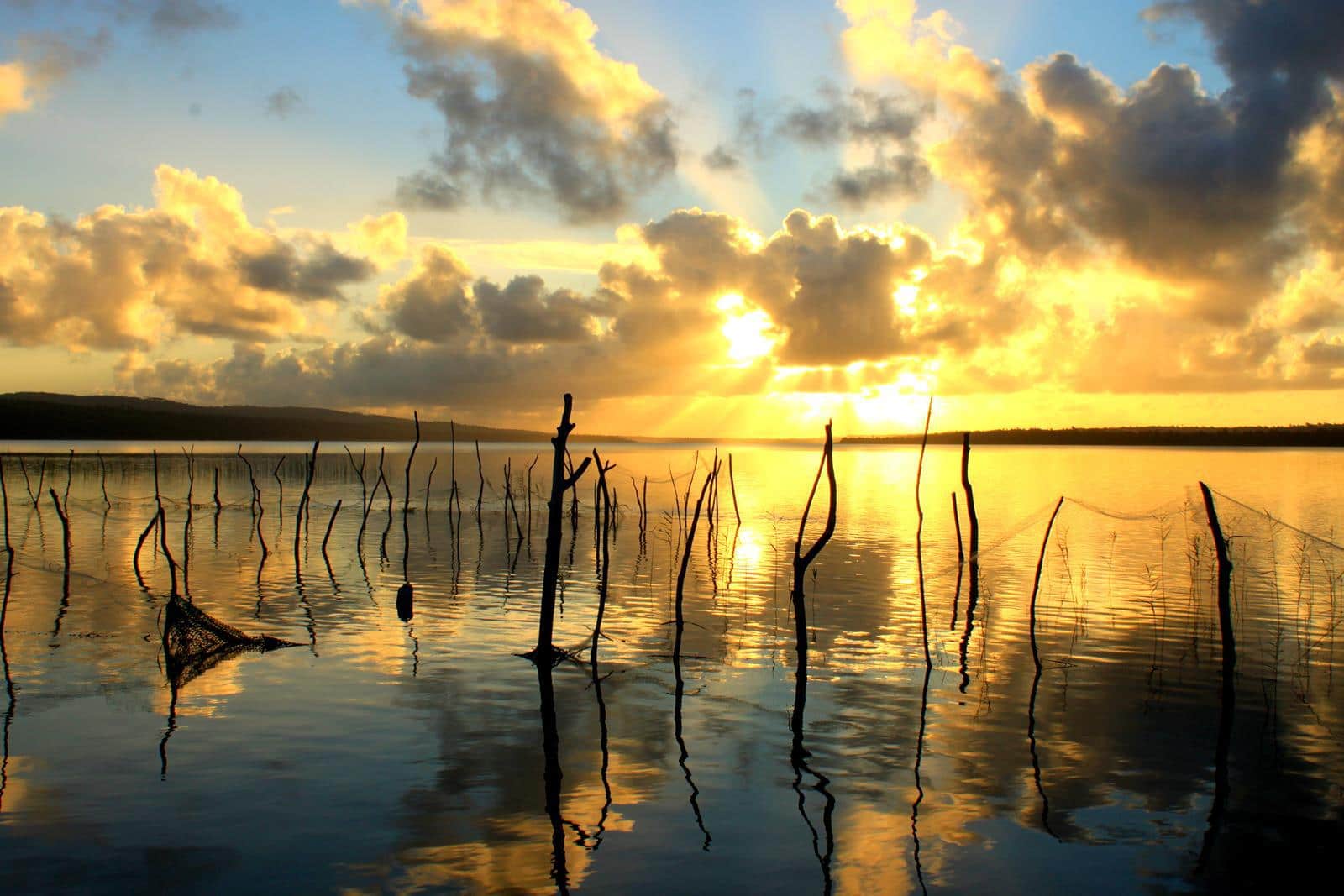 Tertius had set up his operation several years ago and as he was getting established a particularly wet rainy season, coupled with the natural closure of the estuary mouth, saw water levels rise and swamp the road to the bridge that linked his camp to the mainland. This persisted for three years, completely cutting off all vehicle access. 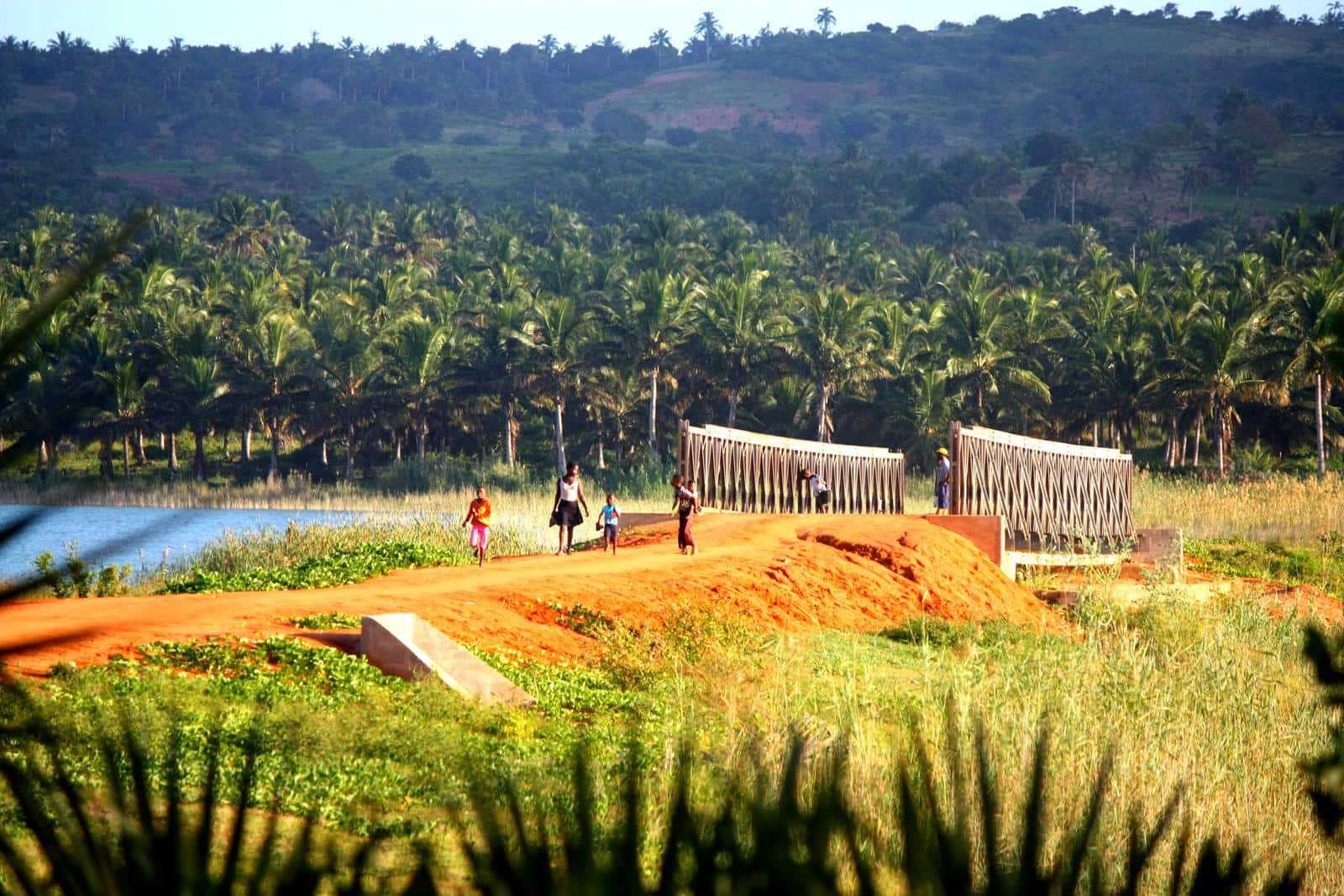 The bridge which was rebuilt.

Hearing that there was some decent sized kingfish in the lake, we rigged up our rods and tackle and commissioned one of the local men to find us a few crabs for bait. Enthused by Tertius’ fisherman stories, the meagre quantities of fishing tackle we had brought with us, mostly as an afterthought, suddenly seemed inadequate.

So, as the sun was setting, we walked with Tertius across the bridge, through a section of marsh and then forest, to the local village store which doubled as a shebeen. Being Saturday evening there was an air of mild festivity, one woman in particular being in a jocular mood. Her small radio, tucked into her bodice, provided the rhythm to her jive steps in which she invited us to accompany her. How liberating it was to think that here we were on a Saturday night in the middle of a little African village while we would not dare do the same in South Africa for safety reasons!

It was pitch dark by the time we arrived back in camp and after cooking up dinner we found ourselves, fishing rods in our hands, under the starry sky overlooking Lake Massava. 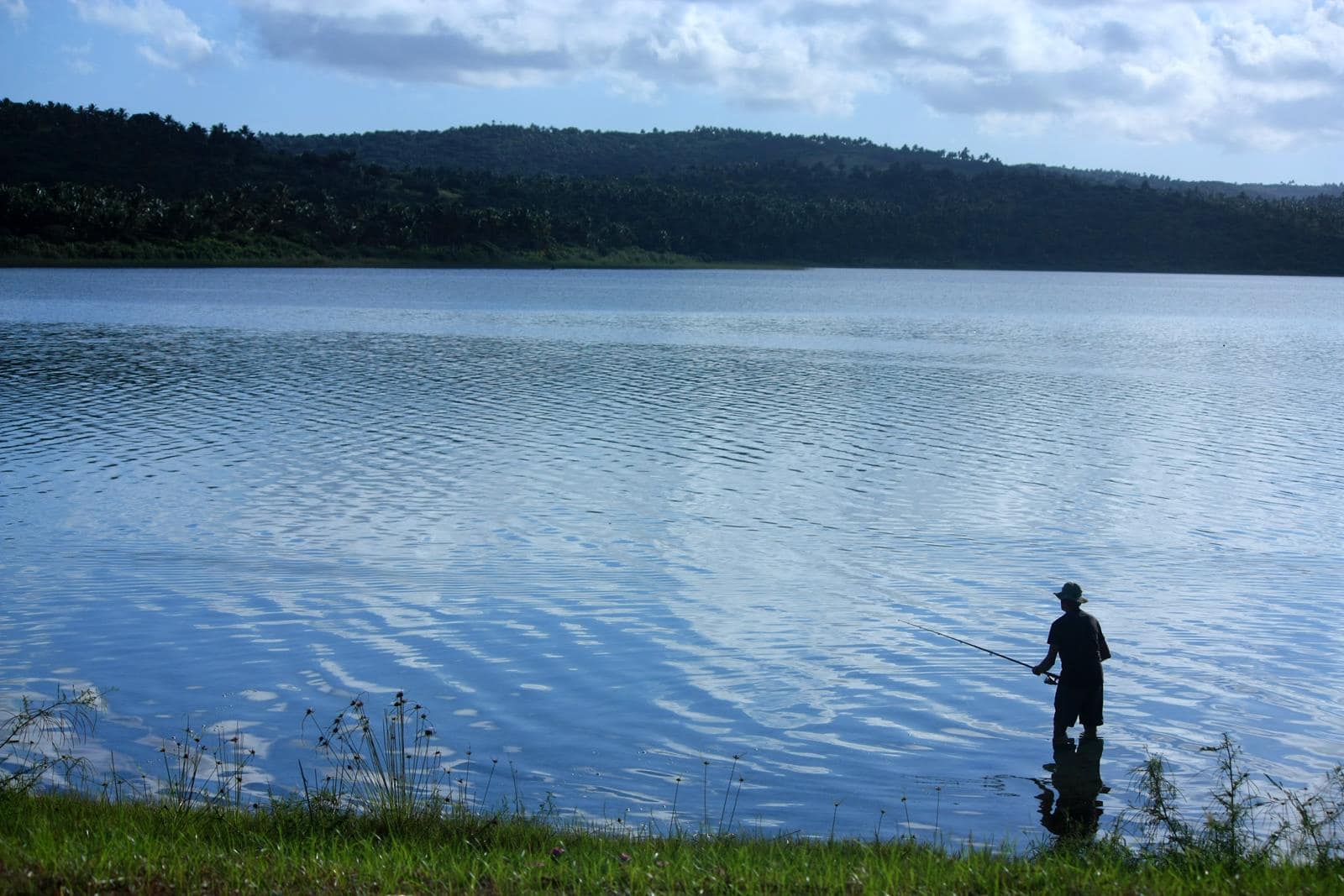 We tried out luck again early the next morning but the kingfish eluded us.

On Sunday morning, whilst running over the wooded dune to the beach, the arrival of two bakkies approaching from behind was heralded by a joyous, happy, typically African chorus. A wedding party! Both vehicles were well down on their suspensions, being full of smartly dressed guests, with the bride in the first vehicle, a beautiful contrast with her velvety black skin and sparkling white wedding dress, smiling shyly. The groom, evidently thrilled with his bride, waved and beamed at us. The second vehicle was even more heavily laden and laboured to a halt up the rutted climb. Some men got off to push but to no avail. The vehicle rolled back down the road and the driver took another few runs at it, failing repeatedly. After several attempts the group finally arrived at the beach for the picture shoot. 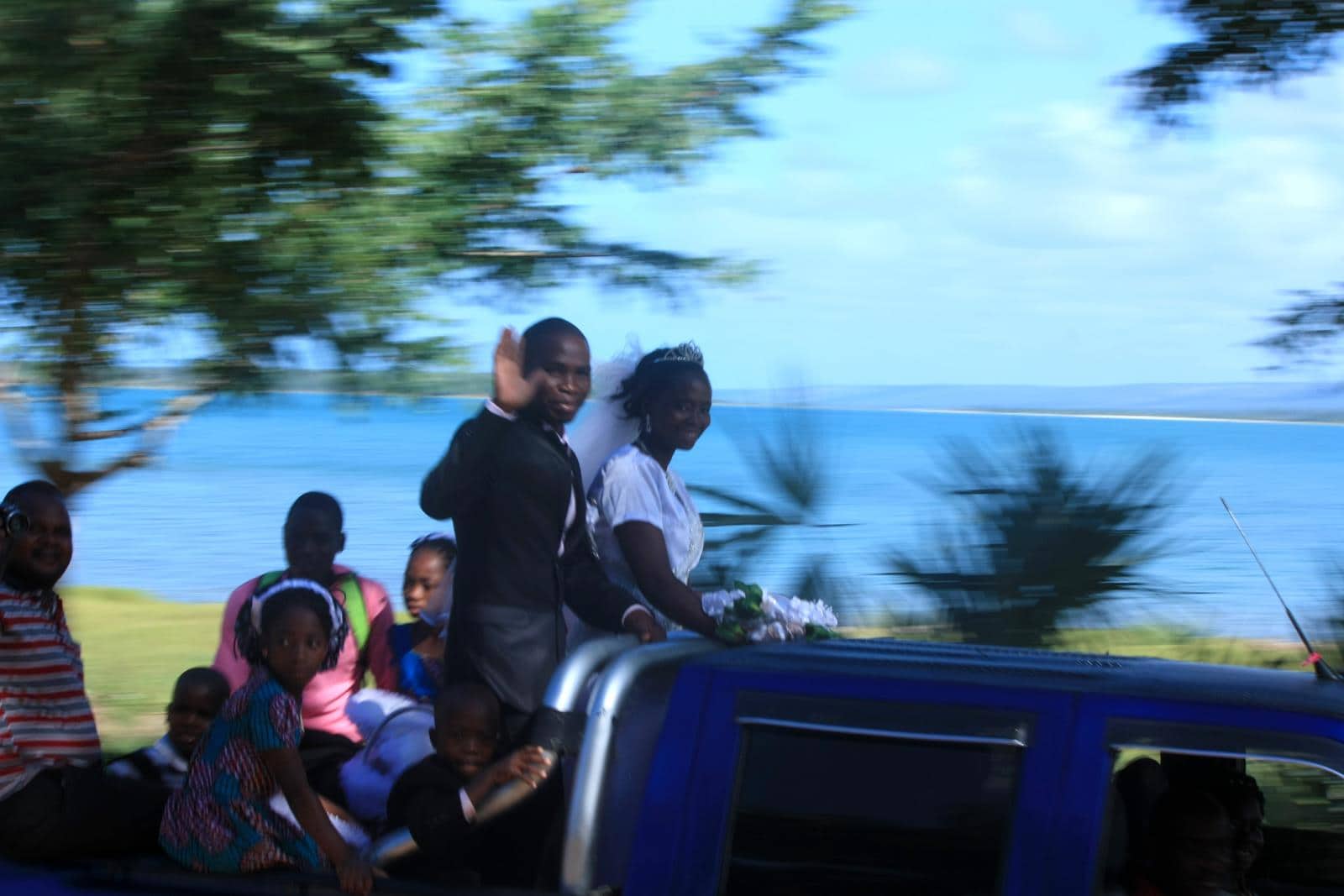 The bride and proud groom on the back of their bakkie.

Monday saw us arrive at Zavora Lodge. Avoiding the Saturday traffic jams and busy shops when we left Xai-Xai had now left us a little short of food. We kept a lookout for produce along the way and were lucky enough to find sweet potatoes, delicious homemade doughnuts and huge, ripe, sweet avocados.

Zavora is renowned for excellent snorkelling in its inshore rock pools and the mantaray fish. Being the only campers in the main section of the camp we enjoyed its good facilities and clear, sweet drinking water.  With no bait or time left to fish, a quick word with two of the local camp workers brought us fresh fish for dinner and tomatoes and onions at a fraction of a price that it would cost in one of the big supermarkets. 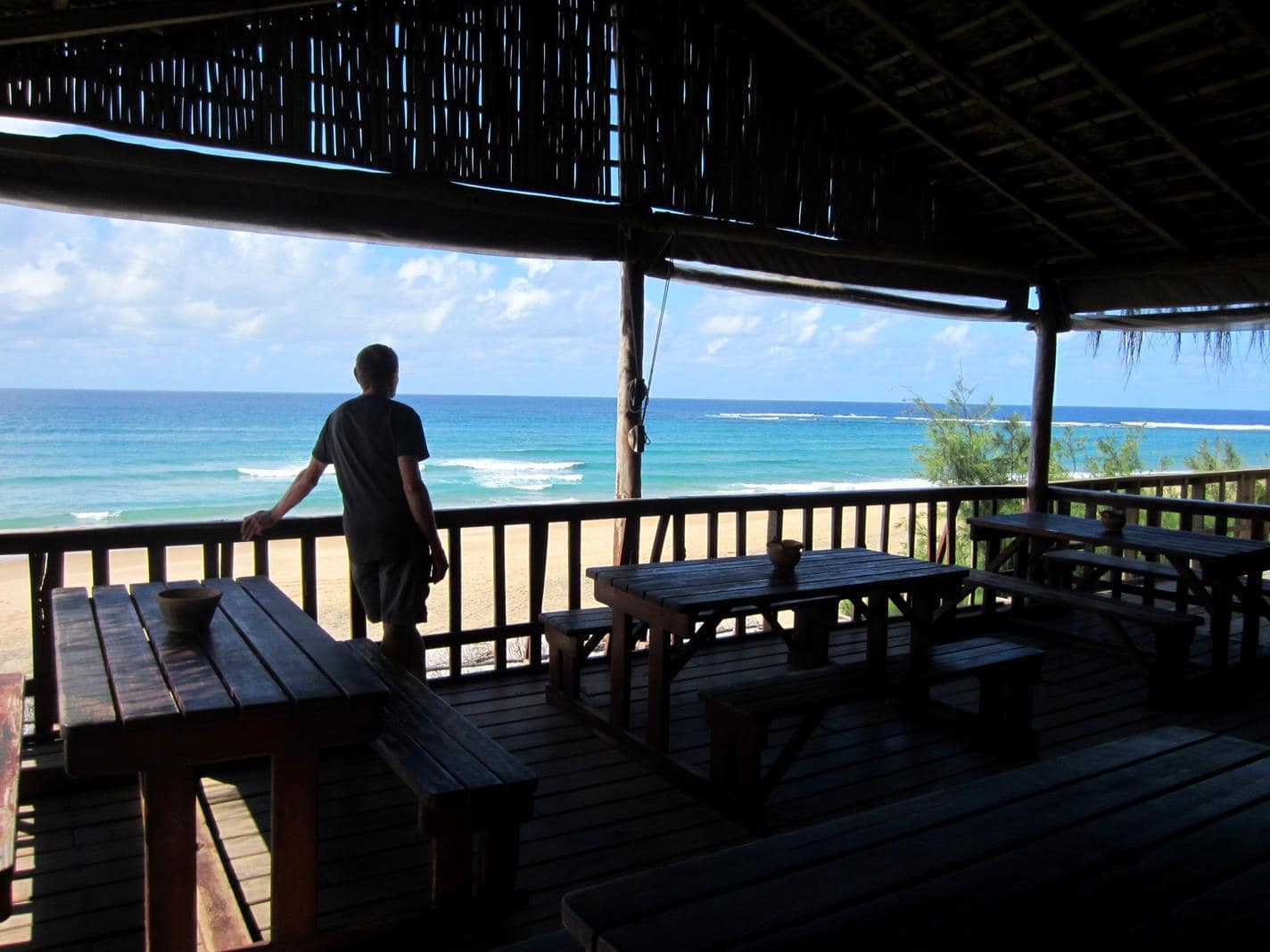 Looking out over the reef at Zavora Lodge.

This morning we were in the water at 07:00, hoping to get some good snorkelling on the reef while the tide was low. The neap tide brought calm conditions and water visibility of about five metres. Snorkelling turned out to be as good as we had hoped.  We saw more than ten new fish species which we haven’t seen since we started snorkelling on this trip. It really felt like we were swimming a massive aquarium, surrounded by a variety of brightly coloured fish of different sizes and shapes.

After a morning of hard work in front of the computer, we’re off to try our hand at fishing since we managed to get some fresh bait from the locals…

3 thoughts on “A surprise stop-over en-route to Zavora”