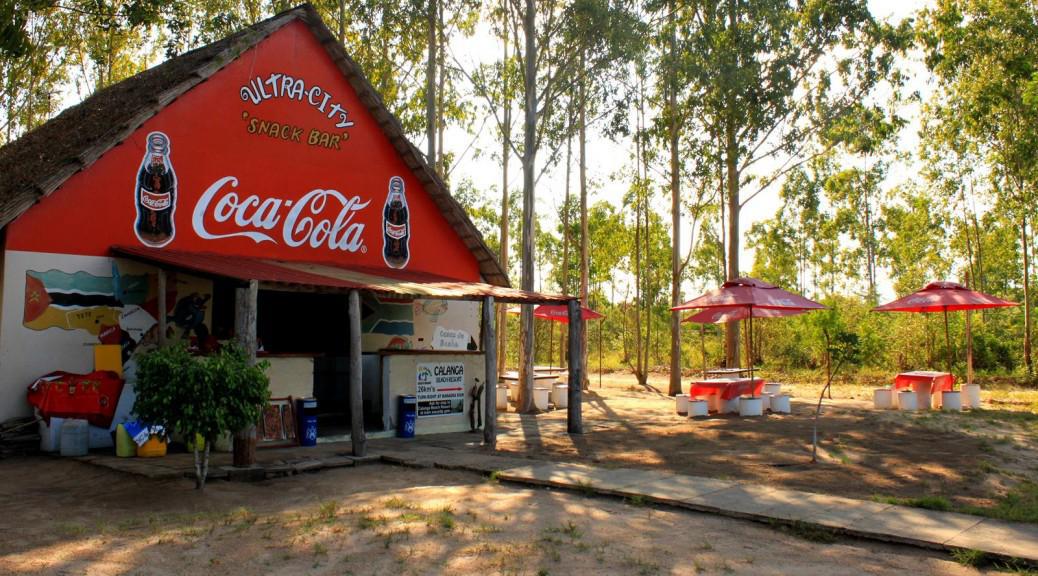 We stocked up with fuel and food in Manguzi, just north of Kosi Bay, after an early wake up and a slow, bumpy ride through deep sand to the town. The border crossing went smoothly, although it took the SARS representatives (SAPS) some time to work out how we should declare our outgoing electronic equipment. Finally, after brushing aside some aggressive hustling by the local 3rd party insurance salesmen to purchase their product, we were through. Our first border crossing went surprisingly smooth!

Almost immediately the usual question arose of where to head and we realised, because of an oversight, we didn’t have the Tracks4Africa ‘Africa Guide’ loaded on our GPS. Without this valuable information we weren’t fully informed of our options and elected to drive through the very deep sand towards a more remote beach camp north of Ponto do Ouro. The roads both north and south of the border in this area consist of sand tracks with many side variants branching off and rejoining here and there around the difficult sections. Which option you take apparently depends on the competence of your vehicle.

Parque de Malongane turned out to be a winner as it was completely quiet with many sites available under shade, no marauding monkeys, warm showers and reasonable snorkelling nearby. We snorkelled, ran and walked on the beach, enjoying the warm balmy air and the atmosphere of a new country.

A chat with one of the diving instructors made us change our intention of bypassing Maputo to the west, as those gravel roads had been soaked with the recent rains and would be very bad. Instead we headed directly north to Catembe for the ferry crossing to the city.

Again we were very thankful to be in a 4WD as the track was initially extremely sandy, then potholed and for perhaps 40km the incessant undulations in the muddied gravel surface were filled with standing water, at times quite deep. In second gear all the way, we couldn’t imagine what the poorer road to the west would have been like. As we neared Maputo the road surface became muddier still, but afforded excellent views of the city skyline from across the channel.

At the ferry terminal in Catembe we were ushered into a short queue by the usual helpful ‘fixer’ found at such places. He offered to pay our ferry fee, show us the bank where we could draw local currency and generally assist us. Unsurprisingly, in addition to the tip he expected, he had included a generous mark-up in the ferry charges which we discovered when we made the payment ourselves. The ferry was very worthwhile, easy and inexpensive; less than R100 for both of us (275 metical) and the vehicle.  A total of 12 vehicles were accommodated per trip, along with pedestrians. Both boats were working and we only had to wait for about 45 minutes for the ferry to depart.

Whilst wishing to avoid Maputo altogether because of the horrendous traffic jams – up to 4 hours we were told – we found that following the bypass road being constructed to the east of the city relieved us of this burden and took us onto the EN 1 highway heading north. Dozens of construction cranes along the outskirts provided evidence of Maputo’s rebirth.

Mindful not to exceed the speed limit in the many restricted areas, we realised that we were in for a long day, Xai-Xai being our intended night stop. In some villages, as in Malawi, virtually all the buildings were painted with the logo and colour of one of the three cellular phone providers, Vodacom being most dominant thus far.

Many entrepreneurs lined the roadside offering all manner of goods; colourful fruit and vegetables neatly stacked up under the shady mango trees, live chickens in mesh cages, wood and charcoal stacked to overflowing in white bags tied off at the top with bark string, clothing etc.  We came across the first of what looked like silvery white gossamer strung tree branches alongside the road – they turned out to be cashew nuts in clear polythene bags. These were signs of poor but industrious people doing their best to make a living.

There were numerous police roadblocks, all of which we passed through smoothly, whilst deflecting the odd request for a cool drink. Fortunately the insurance letter, whose validity was disputed at the border post, passed muster. Advice from local South Africans running camps along the way has been to comply with the law in all respects – especially speed limits – and to know our rights. Prior to departure we had been able to access a very useful information sheet entitled ‘Welcome to Mozambique’ from the ‘Love Mozambique’ Facebook page. This covers the different categories of officials one will encounter on the road as well as their duties and powers; border procedures; traffic violations, applicable fines and importantly, what does not constitute a violation, such as carrying objects on the rear seat.

We were told that resort managers have been working with senior government officials to ease the passage of tourists, as while many visitors loved the time spent at their destinations, the nightmare of officialdom along the way had made many of them vow never to return. It seemed to us that this initiative has been very effective as we experienced no such harassment.

With the shadows already lengthy as we crossed the Limpopo River at Xai-Xai and it was dark before we made our way along the beach road to Montego Resort at Praia de Xai-Xai some 12km from Xai-Xai. After the mosquito repellent routine and relaxing with a sundowner, we erected the rooftop tent and cooked up some dinner, tired after the 11 hour journey.

The next  morning dawned sunny and clear! One of the few such mornings that we have had since leaving Cape Town. Unfortunately after heavy rains the muddy effluent from nearby rivers had left the sea murky which snookered our snorkelling plans, but didn’t prevent some body surfing in the warm water.

It takes something like a road trip to appreciate the value of our water tanks and the availability of clean drinking water; something we all take for granted at home. This was becoming an issue as we haven’t had drinkable water in the last four campsites and we weren’t about to contaminate our tanks with questionable supplies along the way. All the water we lately got out of a tap was either brown and salty or brown with gravel or just plain brown. In no case was it fit to drink.

So it began to dawn on us why we had been advised to install two 70 litre water tanks, one for drinking water and the other not for consumption. At this stage we cannot envisage why we would want to pump brown river or ‘puddle’ water into our ‘dirty’ tank, which is still clean, but no doubt the rationale for this contingency will become clear. So imagine how happy we were to find that at the Montego Resort, just 200m from the beach, the staff said their water was drinkable. To verify this we both drank a mug-full, and being healthy the next morning, were very grateful to fill up our tanks.

The day prior to our entry into Mozambique we received a query as to whether we were going ahead with our plans to cross the border. We had not yet heard about the Zenophobic violence in SA and the temporarily closing of borders. A phone call to one of Pete’s Mozambican contacts reassured us that it wasn’t a resurgence of the Renamo/Frelimo conflict that he had experienced on an earlier motorcycle trip and that it was safe to travel.

Thus we were very surprised to learn that virtually all the Montego Resort bookings for the Freedom Day/Workers’ Day holidays had been cancelled. We hadn’t experienced any animosity at all along the way; to the contrary all local people were extremely welcoming and friendly. They were well aware that the typical holiday makers were not the perpetrators of such violence and that any disruption to tourism was bad for their jobs.

Praia de Xai-Xai is renowned for excellent snorkelling on the reefs very close inshore and we were sorry to have missed out on that. However, our hosts at Montego took us on a sightseeing trip, visiting the ‘The Dune’, a massive dune which offers excellent views, and the nearby Chongoene Hotel, which in colonial days was one of the top hotels in Mozambique but was plundered during the civil war and never reopened.

Today we are off to Zavora, another village on the coast where we hope for good snorkelling. It’s amazing to experience this underwater world of swell movement, deafening silence (other than your own breathing) and brightly coloured fish…