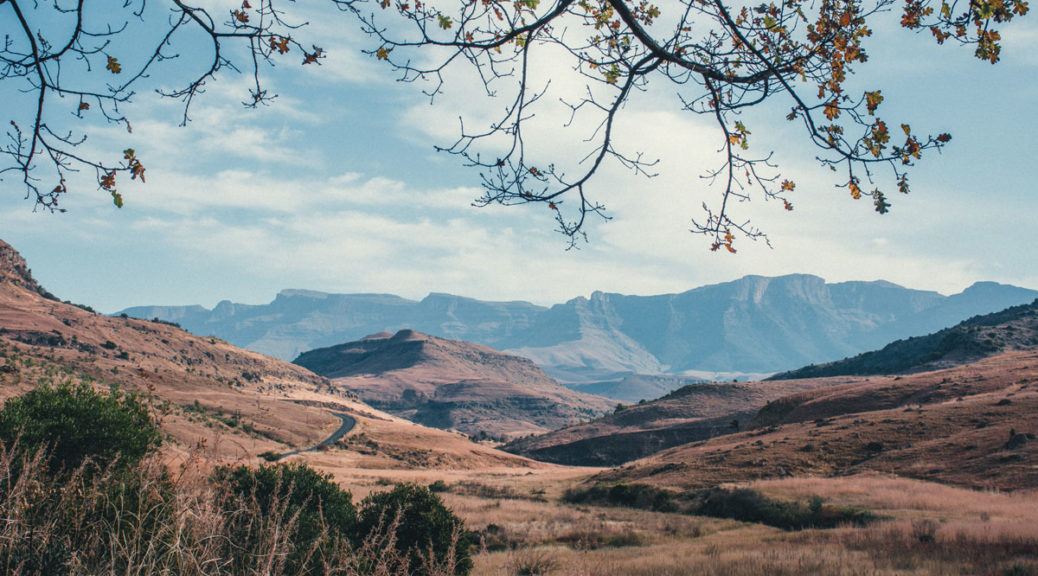 You can cruise to the Drakensberg along the highway, but then you’d be missing out. Turn off onto back roads to Giant’s Castle for beautiful panoramas and charming spots. By Melanie van Zyl

The route from Johannesburg to the foothills of Giant’s Castle is usually tackled in six easy hours. But with a whole long weekend to squander and back roads to discover, I opted for a meandering route.

At Harrismith we swapped the N3 highway for the scenic R74, a pleasantly rambling alternative to the more direct road. After a stop for stunning views over Sterkfontein Dam, we visited the Piet Retief Monument and the Kaalvoet Vrou statue. The monument of a woman, striding away from the former Natal province, is in memory of Susanna Smit. In 1837, she declared she would rather trek barefoot back over the mountains than live under British rule.

We had an easier way of it as we moved on to the recently resurfaced Oliviershoek Pass. Once plagued with potholes, the road now offers more freedom to enjoy the views over Bergville. Our destination was Little Switzerland Resort, perched on the peaks of Oliviershoek Pass and flanked by the Drakensberg’s dramatic amphitheatre.

A dip into the dam

Like so many places in the Drakensberg, the resort has smooth walking tracks that scale the slopes. We passed baboons barking from their perches and stark silhouettes of sugarbush trees before winding our way towards the fishing waters. Here Scott fly fished for rainbow trout below sandstone cliffs in the breaking dawn.

With luck (and admittedly some skill) he netted two beautiful specimens – hopefully, good tidings for the remainder of our trip. We were on our way to the fruitful waters of the Bushman’s River, a distinguished fly fishing mecca.

The gravel route to Giant’s Castle

Following coffee and a well-deserved breakfast, we jumped into our 4×4 again. Even though these capabilities were unnecessary, I was thankful for decent clearance.

We drove through Bergville, taking a right just outside of town for our first taste of dust. Although corrugated, the 17km dirt road is uncomplicated. As we passed the turn to Winterton and Cathedral Peak Wine Estate, I made a note to return for a tasting on our way home. At the Thokozisa complex, there’s coffee and cake if you need a reason to stop, but we pushed on.

Roughly 11km before Estcourt and the N3, we took a turn towards the small sprawling town Ntabamhlope. Now the foothills of the Drakensberg drew nearer, and the tar started to crumble. We were pleasantly surprised with a short potholed pass, which presented further panoramas of the grasslands. After entering a shaded pine plantation we found tar again at the next intersection. We savoured charming pastoral scenery until reaching the gates of Giant’s Castle.

Established over 100 years ago in 1903, the Giant’s Castle Game Reserve was formed to protect a declining population of wild eland. Today, these wild antelope remain intact, as does the pristine source of the Bushman’s River. This is where anglers can expect to catch both Brown and Rainbow Trout, with Browns typically caught more frequently.

There are several ways to fish this area. Guests staying at nearby accommodation enjoy exclusive waters while a daily permit gives access to the trout waters in the reserve. For those wanting to fish other stretches of the river, it’s also possible to book a day pass with the amaHlubi/NFFC community project. Request a booking on one of four beats on the Bushman’s River.

If you’re not into fly fishing, the world-renowned Giant’s Castle Main Caves Museum provides a fascinating glimpse into the world of the San. A guided walk is available to the well-preserved panels of rich rock art; tours start on the hour from 9am to 3pm. But if you just want to enjoy the scenery, set off on one of the myriad trails that criss-cross the landscape.

To explore along back roads and little-known tracks, get our South Africa Traveller’s Paper Map or download our GPS maps for route planning on the fly.