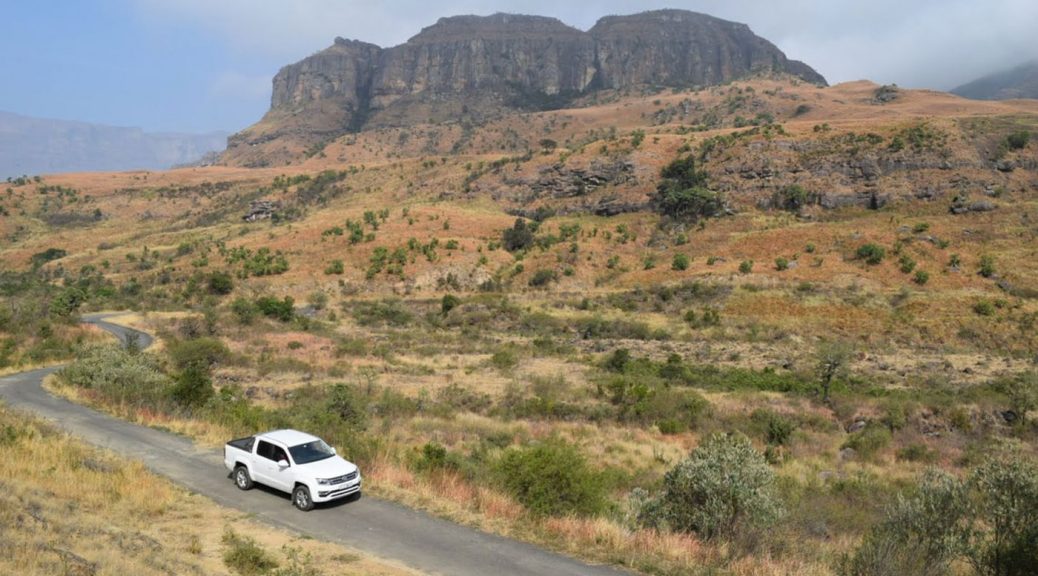 A World Heritage Site, Maloti-Drakensberg Park is home to several reserves that safeguard scenic landscapes and important rock art. Set off on quiet roads to link a couple of protected areas together. By Hlengiwe Magagula

Accessing the high Drakensberg is not supposed to be easy. For all of time the sheer cliffs of the escarpment and deep thicket-filled valleys have been a natural barrier to human encroachment. These are wild mountains where the San walked with a light step, leaving only their rock art and scatterings of stone tools.

Today, from Royal Natal in the north to Bushman’s Nek in the south, there is an alluring choice of Ezemvelo KZN Wildlife and private camps. Linking up two or three destinations makes for an interesting road trip. The geography forces either long diversions to move between valleys, or some gravel road short cuts.

As a first-time explorer with a newish licence and a borrowed VW Amarok, I wasn’t going to take on anything too challenging. After some map work I settled on a combination of Injisuthi and Giants Castle resorts. They are both in the heart of the Maloti-Drakensberg Park, and close enough to combine in a long weekend, serving up a quintessential Berg experience. As the crow flies it is only 20km between the two camps, but the shortest route by road is 100km.

On the road to Injisuthi

With Injisuthi the first destination, I travelled from the Dolphin Coast via the quiet R614 and R622, completely avoiding the stressy accident-prone N3. It’s also a part of the Midlands Meander, meaning there are lots of tempting diversions, but I restricted myself to a top-class biltong shop on the R103 at Mooi River.

For the last 10km before the national park gate the gravel road was bumpy, but nothing to the Amarok. The surface in the park is metalled, so it was easier to enjoy the views and wildlife, starting with a grey rhebok ewe skipping along the road.

Injisuthi camp is a riverside oasis thanks to the shady lime-green plane trees, planted at a time when non-native species were not a concern. It is the base for multi-day hikes to Mafadi and other peaks over 3000m, but I stayed lower, enjoying an overnight hike to Marble Baths.

Stretching the legs at Giant’s Castle

Allowing for photos stops, it took two hours from Injisuthi to Giant’s Castle, and I took the gravel road short-cut via Draycott. The surface was in good shape, and I didn’t encounter any other vehicles as the route twisted and climbed southwards, meeting the tar again at White Mountain resort.

On check-in at Giant’s Castle resort I collected the free day walks map and an excellent Visitors Guide booklet. With their help I picked an easy introductory stroll, following the directions for the one hour River Walk. Directly from the main camp, a level path led towards the sinking sun and the escarpment, punctuated by benches to pause and take it all in. The donor memorial plaques on the benches showed that this was a favourite walk for visitors past.

In need of more exercise after the drive, I continued down into the valley where I found that this part of the park offers more than vistas and thriving nature. In one direction the path disappeared into a ravine through dense forest leading to Main Caves, the unimaginative name for the sandstone overhangs that shelter a fascinating collection of Bushman art. Forking in the other direction, I found another genre of rock art. Rock 75 is a boulder carved by British soldiers that made camp here in 1874.

Of rebels and giants

The British had blocked the passes to Lesotho following the Langalibalele Rebellion. Inkosi Langalibalele became king of the amaHlubi people in about 1836, and in 1848 fled to this area to escape conflict with Zulu king Mpande. European settlers in the Natal colony were happy to have Langalibalele’s people as a buffer between their farms and the San who still inhabited the mountains in those times. But when the government tried to force the amaHlubi to register arms in 1873, relations soured.

When Langalibalele failed to comply, he was adjudged to be in rebellion, and the British Army’s 75th Regiment on Foot took up residence (and rock carving) at this idyllic spot, forcing the king to escape over the pass that today bears his name. The pass is an 8-hour round trip walk from the main camp, something I decided to save for another visit.

The path leads back to camp via the river, where I spotted a kingfisher’s glint in the fading light. The mix of wetlands, forest and open grasslands suits all sorts of avian niches and the most famous local resident is the bearded vulture or lammergeyer, a high mountain specialist. Giants Castle is the place to find them in Southern Africa, and to get an intimate look the special vulture hide must be booked well in advance. Those that do so will likely see a true giant in its stronghold.

What routes do you recommend for fellow self-drive travellers in the KZN region? Share in the comments!

One thought on “Road tripping in the Drakensberg”