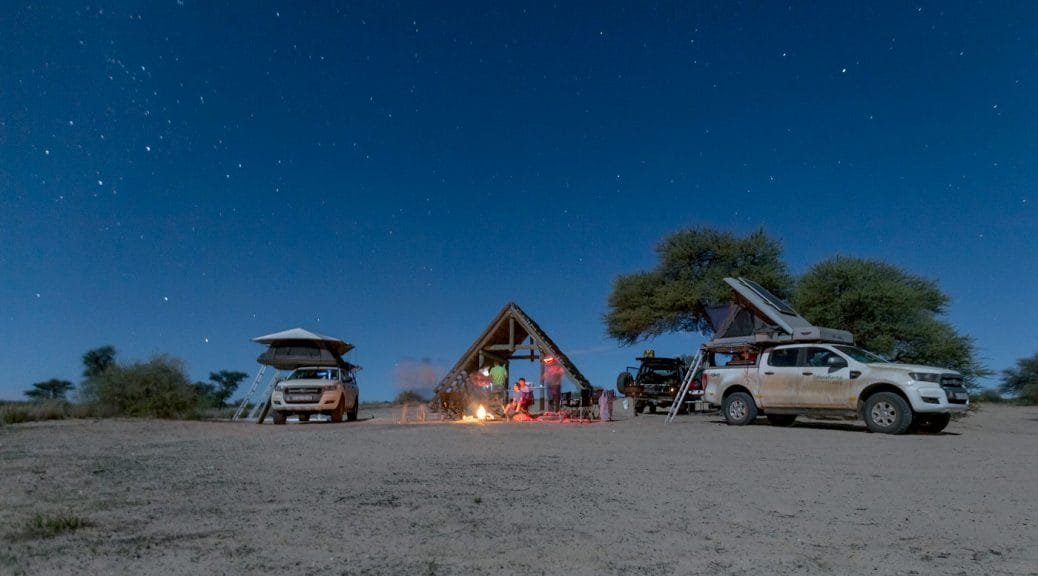 Mabuasehube is one of the wildest camping destinations in Southern Africa and arguably the best place in Africa for close encounters with lions. Recent rates changes mean that some camps are now significantly pricier than others. Here’s where to go for the best deal. Words and pictures by Chris Davies.

I love the Kgalagadi Transfrontier Park, especially the Botswanan side, and especially Mabuasehube. There’s an unnerving wildness to this corner of the Kalahari, an on-the-ground experience that you’d never guess from glancing at the map. Jutting out from the transfrontier park’s eastern edge, Mabuasehube has a tacked-on look. It’s a late addition (incorporated into Botswana’s Gemsbok National Park in 1992) and has always been a bit out of the way – a scattering of seasonal salt pans and tough-to-reach campsites surrounded by sandy, 4×4-only tracks.

It’s also an area that’s increasingly famous for its lions and videos like this one are all over YouTube and social media.

Lions licking your tent isn’t everyone’s idea of a good time, but for those who like it wild, Mabuasehube is pure magic. It’s a paradise of isolated campsites, close encounters and stunning night skies and, as an added bonus, it’s still some of the most affordable wild camping you’ll find anywhere in Africa.

That may be changing, however, with the recent privatisation of two of Mabuasehube’s main camping areas. Botswana’s Department of Wildlife and National Parks (DWNP) used to manage all the campsites in the region and they still take bookings for the 4×4 Wilderness Trails and three of the pans. The two largest pans, however, Mabuasehube and Mpayathutlwa, are now run by a private operator, the Inter-Tourism Group.

The hike in fees is quite substantial. While DWNP sites have remained unchanged for years at P30 a night (about R40) for all non-residents, the new Inter-Tourism rates are P180 a night (R240) for SADC citizens, and if you’re an international visitor, it’s now $35 (R515). And daily conservation fees (about R27 per person and R5 per vehicle) are still applicable for all bookings.

The new fees at Mabuasehube and Mpayathutlwa pans are more in line with those on the South African side of the park, where a premium Nossob campsite (with private ablutions) will set you back R680 a night for two. The facilities in Nossob are far better, but then Mabuasehube’s wildness is unmatched… If tent-licking lions are what you’re after, then it’s worth keeping an eye on the eight remaining salt pan campsites which are still run by the DWNP.

Of the 19 camping stands in the Mabuasehube region, seven are around Mabuasehube and Mpayathutlwa pans and are now managed by the Inter-Tourism Group. Three more are along the two 4×4 wilderness trails that head west towards the Nossob River, and there’s one (not recommended) overflow camp at the park’s eastern entrance gate. The remaining pans to look out for are Bosobogolo, Monamodi, Lesoloago and Khiding, each with two camping stands, all currently still operated by DWNP, at the old low rates. Monamodi and Khiding’s stands are quite close together, while Bosobogolo and Lesoloago’s two stands are more spread out, on opposite sides of the pans.

Despite minimal facilities (just a basic A-frame for shade, plus a pit loo and shower hoist), roughly R75 a night seems incredibly good value. And as all the camps in the region have the same basic setup it’s debatable what additional value privatisation has brought. How long these eight stands will remain DWNP-run is unclear, but right now they’re certainly one of the most affordable, and truly wild camping options in Southern Africa.

The Botswana Self-Drive Guidebook Edition 2 is the quintessential guidebook for overlanders who love to go off the beaten track. Filled with detailed maps, travel advice and useful contact details, it’s got everything you need to plan the perfect road trip. Buy it online here.