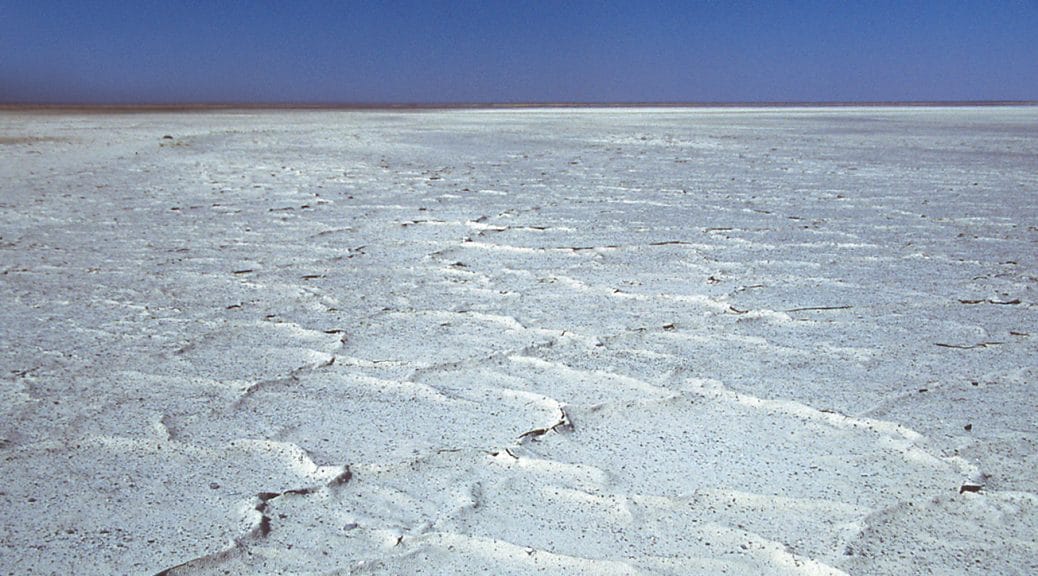 These mysterious salt flats in the Kalahari Desert might just be Botswana’s best-kept secret. Learn everything you need to know from the man who wrote the first-ever guidebook to the pans.

The Makgadikgadi Pans are a trio of salt flats in northeastern Botswana located about halfway between Francistown and Maun. Approximately 4,900 square kilometres in expanse, this shimmering inland sea is unlike anything else in the country. Since his first visit in the 1980s, Grahame McLeod has found the pans to be an endless source of fascination. Where most people view them as a passing fancy en route to the better-known Okavango Delta, he recognises their potential as a premier tourist attraction. His new book, Makgadikgadi Pans – a Traveller’s Guide to the Salt Flats of Botswana, is a deep dive into what makes them special.

Why see the pans?

The sheer size of the pans make them a worthwhile stopover on any Botswana trip, but their appeal lies in more than their vastness. For Grahame, they represent the ultimate escape: a chance to leave behind 21st century living in favour of solitude and a slower pace. A remote location combined with unspoiled beauty makes for the ideal digital detox.

“Being here evokes many emotions. This is a pristine wilderness: a place of peace, solitude and intense silence only broken by the moaning sound of the wind. Big sky country! A timeless place, it looks the same as it did thousands of years ago. Visitors can wonder at the mega-lake that once existed here and left behind a sea of salt.” says Grahame.

Though barren and desolate in appearance, the pans are in fact teeming with biodiversity. Not only is there ample birdlife, exemplified by the masses of flamingos in the wet season, but the pans play host to one of Africa’s largest wildebeest migrations.

Also read: Out of the ordinary Botswana activities

And that’s not all. “There is also an impressive escarpment that runs along the southern shore of Sowa pan. In years of good rainfall, the pans are transformed into an inland sea, unrivalled in southern Africa,” he says.

“Finally, the pans are about more than just the natural environment. The remains of ancient settlements can be found around the pans, and in nearby villages, visitors can experience their rich culture and traditions. What’s more, many of the attractions are fairly accessible for visitors who don’t have a 4×4.”

T4A note: No matter the season, navigating the pans can be challenging. T4A strongly recommends a 4×4 or high-clearance vehicle for all visitors.

New to the pans? First-time visitors should make for areas that are easily accessible from the tarred Francistown-Maun road. Start by camping for two nights at the Nata Bird Sanctuary in the northeast. From there, Grahame recommends a drive to the viewing platform along the northern shore of Sowa Pan, or along the Nata River towards its mouth.

“At these places, a wide range of water birds may be seen, including flamingo and white pelicans. Small herds of zebra, springbok and wildebeest may also be seen on the grasslands around the pan. Visitors might like to join a guided late afternoon drive, with sundowners, from Nata Lodge,” he says.

Next, head west to Planet Baobab, a quirky and colourful campsite nestled in a forest of giant baobabs near Gweta village. The camp has Kalanga-style rondavels and offers overnight trips to Ntwetwe Pan.

“On this unforgettable trip, see the meerkats along the shore of the pan and then view the sunset while riding a quad bike far out onto the pan. Enjoy a delicious braai-style dinner before sleeping under a star-studded sky.”

First-time visitors with a need for speed may find it hard to resist the lure of Makgadikgadi’s open, flat terrain. After all, where better to display your 4×4 skills than in a desert landscape with no obstacles in sight? The reality is that hasty drivers may find themselves brought to a sticky standstill, warns Graeme.

“From a distance, the pans may appear dry but the thin, white crust may overlay great thicknesses of sticky, wet clay; hence, even the most robust of 4x4s may break easily through the crust and become stuck in the morass below. And there are few lodges around the pans that will be willing to drag you out!”

To avoid this problem, he recommends steering clear of dark patches on the pans during the dry season – these areas will be wet just below the surface – and sticking to well-worn tracks.

Some tracks, especially those in Makgadikgadi Nxai Pan National Park, can be very sandy, so 4×4 is called for. Tracks may even harbour unseen dangers that could damage your vehicle. “The seeds from some tall grasses growing along the central ridge of some tracks may block your radiator. This will cause an increase in water temperature resulting in your engine overheating. To avoid this problem, attach a piece of shade netting in front of the radiator and check your water temperature gauge often. Also, check below the vehicle in case dried grass has collected there; if not removed, the grass may catch fire, especially if it is in contact with the exhaust pipe. So, carry a fire extinguisher in your vehicle!” he warns.

While Nata bird sanctuary and Lekhubu island are the most popular attractions in the area, the southern shore of Sowa pan holds a special place in Graeme’s heart. There is plenty to see nearby, including the colourful rondavels at Mosu village, ancient ruins dating backs thousands of years and breathtaking views of the pans.

“And for the adventurous, one nearby lodge offers the chance to go yachting on the pan – not when it is flooded, but on the dried pan surface!”

Asked about his most magical Makgadikgadi moment, Grahame struggles to pick just one: “There have been many! They include viewing gorgeous sunsets over water-filled Sowa Pan, the full moon rising behind the massive baobabs on Lekhubu island and spending the night under the stars far out on Ntwetwe Pan.”

Also read: How to self-drive Botswana in ten days

• The Makgadikgadi Pans are some of the largest salt flats on the planet, second only to Salar de Uyuni in Bolivia.
• The pans are the remains of a super lake that once covered an area of 175 000 square kilometres in northern Botswana – about twice the size of Lake Victoria.
• Sowa Pan is one of only two places in Africa where soda ash is exploited.
• Despite the aridity of the region, over 350 bird species call the Makgadikgadi home.

After visiting the Makgadikgadi repeatedly over the last 30 years, Grahame McLeod embarked on writing his guidebook three years ago. He camped or slept in the back of his truck as he explored every aspect of the pans. The result is Makgadikgadi Pans – a Traveller’s Guide to the salt flats of Botswana. While it’s a practical guide on things to do and where to stay, it features insightful information on the area’s geology, wildlife, vegetation and key attractions. The book (R230) is available at all major bookstores and online at Penguin Random House, Loot, takealot and Reader’s Warehouse.