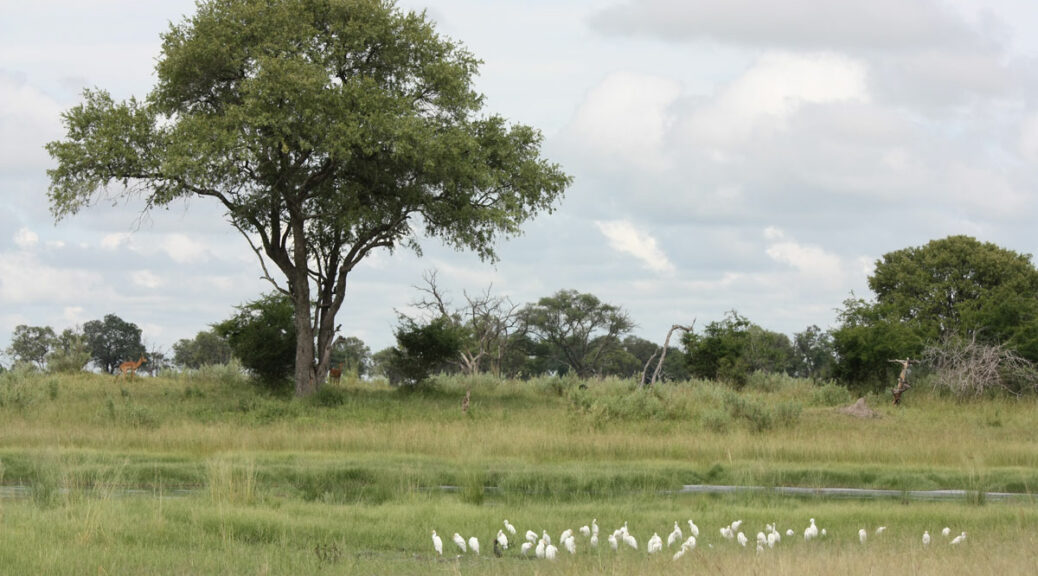 A tour of Botswana offers plenty of wildlife sightings (even outside parks). T4A regular Boudewijn de Roo reports on campsites stayed at during his circuit of the country.  His verdict? Camping in Botswana delivers memorable experiences.

In honour of a couple visiting from the Netherlands, we’d organised a trip to Botswana in September 2019. We were travelling in a Nissan NV350 panel van 2×4, which I’d converted myself into a camper van. The Dutch couple was in a Land Cruiser with rooftop tent and a separate ground tent. Our trip took us up South Africa’s West Coast for the flowers and through the Kgalagadi Park before making our way to Botswana via Gobabis.

Camping on the Okavango

As far as we in the camper van were concerned, our holiday started at Shakawe River Lodge campsite just east of Shakawe village. It is a convenient place to stay if you want to visit Tsodilo Hills, a World Heritage Site full of history and religion and a sacred place to many Botswana residents.

Shakawe River Lodge is situated in a bend in the Okavango River where a floating island of grass has got stuck. From the bank it is a sheer 3m drop down to the river. Right below a hippo was feeding on the grass. I don’t believe I will ever again see a hippo so close up and perfectly safely.

Next door to the campsite is a fish depot where the locals bring in their catch so that it can be frozen for further transport to markets. They sell locally as well for P30 per kg. I bought two huge fish of 1,5kg each. What a feast!

Next was Mahangu Lodge campsite, my third visit. While most people camp at Ngepi, we managed to get the best of both worlds. We hiked the short distance to Ngepi to take the compulsory plunge in their famous “cage” pool in the Okavango River. Much nicer than a chlorinated pool.

Rupara Restcamp is a community run camp just before the gate to Nkasa Rupara National Park, formerly Mamili. Excellent facilities with each site having a tap, private hot donkey shower, flush toilet and solar light. There are no fences in these parts of the world between parks and their surroundings, nor around campsites themselves. This is where the “trouble” started with our visitors from the Netherlands.

They had chosen to sleep in a ground tent and on arrival had to pitch their tent exactly where elephants had left proof of their presence in the form of some droppings. The “dangerous” looking warthogs grazing nearby resulted in hysterics. Still later the roar of a lion didn’t help matters. Nor the fact that the bathroom was 30m away in the dark!

Entrance to Rupara Park is N$30 pp, compare that to the rates in Botswana of P120 pp! But we didn’t risk driving through the park in our 2×4 camper. In retrospect, with the water levels being so low, it would have been possible as long as we’d stayed away from the Rupara Island road which is very sandy. The elephants came right through the camp to say farewell to us on departure.

At Katima Mulilo I selected Zambezi Mubala Lodge campsite to the east of town for the Carmine Bee Eater colony close by. On a flat piece of ground of perhaps 100m x 100m a thousand of these beautiful birds congregate. Initially I was disappointed as I’d expected a vertical river bank. I later discovered that although the birds prefer these vertical river banks, they apparently also make nests on a flat surface by tunnelling down vertically. The river bank at the lodge catches the afternoon sun and is a favourite sunbathing spot for the local crocodiles and leguaans. Really close-up sightings. The warm water along the riverbank also attracted hundreds of fish. But we were booked for our next destination and had to go on.

We headed to Senyati Safari Camp, approximately 30km from Kasane on the road south. In Caprivi and Botswana you don’t have to visit parks to see wildlife. On the tarred road between Kasane and Senyati we had to stop to give elephants right of way. And hit the brakes hard when a warthog family suddenly appeared from under a truck parked next to the road. Senyati is famous for its viewing deck and sunken hide at their waterhole. On average more than 100 elephant, buffalo and many other species visit on a daily basis. You get all this from a comfortable chair in the shade with drinks being served from the bar.

We parked our camper van with its back to the bush where a floodlight stood. As it was hot, the back door was open and as I got into bed, I remarked that the view looked like a framed picture. In the middle of the night, opening my eyes, what did I see in my picture frame? An elephant feeding on a tree, all lit up. My wife watched this peaceful scene for a full hour.

Years ago we drove the Hunter’s Road from north to south and pitched camp under beautiful trees just a few kilometres away from Senyati of which I wasn’t aware at the time. Before we got chased away, we witnessed the wildlife traffic to Senyati’s waterhole. We revisited the exact spot very nervously, this time on foot, and made an illegal border crossing into Zimbabwe just for fun.

On the way home

We spent one night at Planet Baobab just east of Gweta. The fairy tale atmosphere after dark makes it the obvious choice for a stopover on the way to Maun. The road from Gweta to Maun takes you through Makgadikgadi Pans National Park. Plenty of giraffes and other wildlife; the meaning of a zebra crossing must be taken literally here.

In Maun we’d wanted to stay at Island Safari Lodge, which was unfortunately full for the first night, so on their recommendation we landed at Audi Camp. Not to our taste. The second night was spent at Island Safari Lodge camping. We could have stayed both nights at Okavango River Lodge, which is also very nice. Our lady friend in the Land Cruiser went on a mokoro trip, which required a long 4×4 drive deep into the delta to find water due to the low water levels.

On a previous trip we were fortunate to be among the first people to witness Lake Ngami full of water just as Livingstone had seen it hundreds of years ago. In Maun we were told the lake was dry again, saving us the intended diversion past it. We continued on to Kalahari Rest Lodge just north of Kang and the next and last day in Botswana to Camel Park just east of Tsabong. Both good stopover places.

Make your way to these and other destinations in Botswana with the help of T4A maps. From the convenient Botswana Traveller’s Paper Map to the detailed Botswana Self-Drive Guide Book, our maps will help you plan where to go, what to see and how to spend your time in this safari paradise. With the Botswana GPS Map installed on your Garmin, you can navigate with confidence.