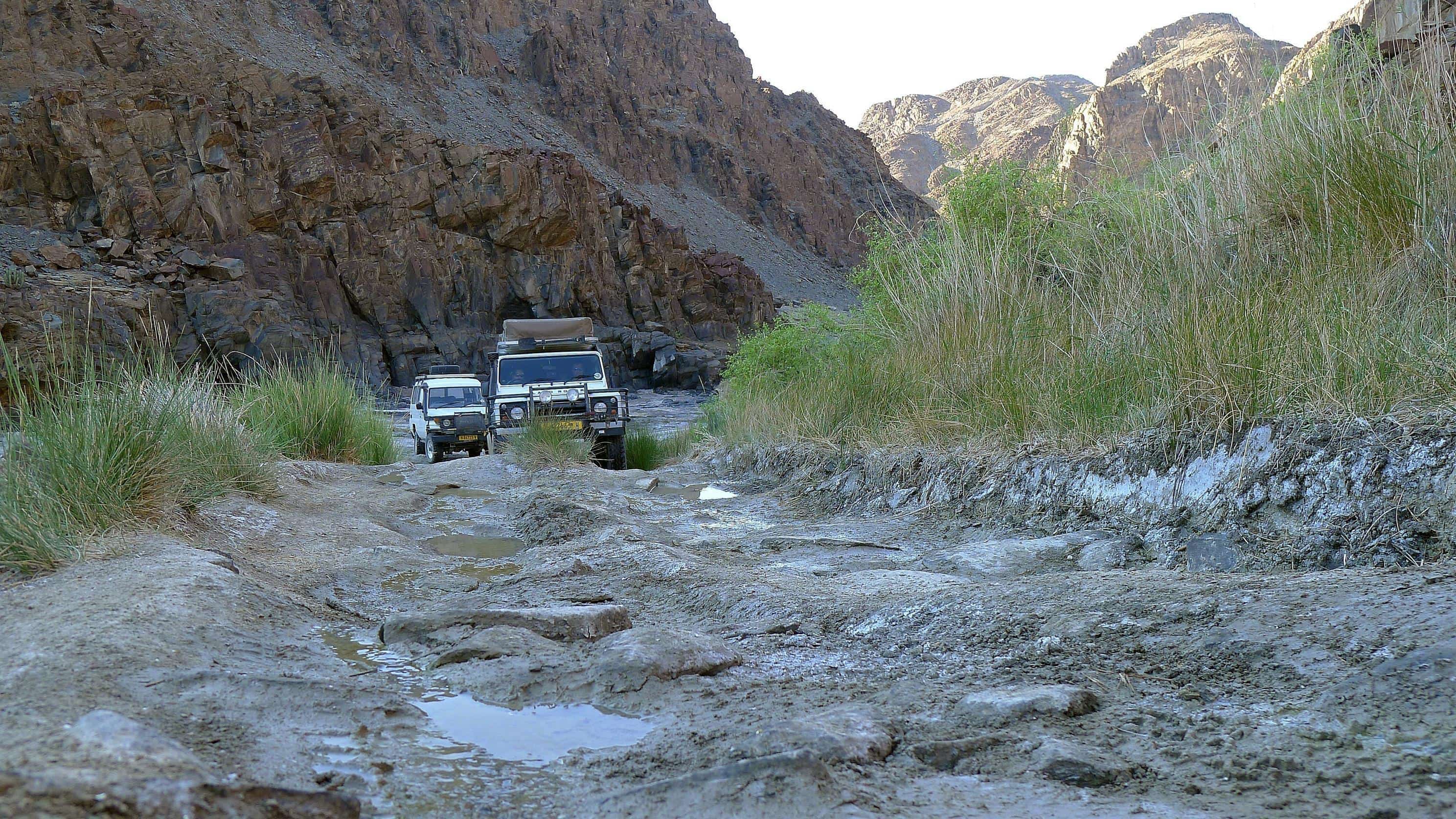 Once in a while Frank Höppener escapes overcrowded Holland to enjoy the African bush. But sometimes things don’t go as planned. Here is his recall of the unpredictabilities of his last trip.

When travelling in Africa you’re never sure of what happens. In April 2014 I set off for Botswana in my Land Cruiser which is kept in storage in Windhoek. Before I reached Gobabis I had serious problems with my wheel bearings and had to return to Windhoek, stopping every 20 kilometres to pour water over the rear left hub. So it was that my original plan for the coming month was overtaken by events. I had to cook up something new. I had an uncomfortable problem: I was stuck in Windhoek during Easter and there is no place on earth as utterly boring as an African city during festivity days. If you ask me it is bound to lead to brain death either from boredom or from alcohol.

Help against boredom came from an unexpected corner. While I was checking out prices at the City Campsite at Schanzenweg, I was ambushed by two men with knives. Even though I tried to defend myself, my GPS, passport, car key and some money were robbed. You can image how angry and ashamed of myself I was! I mean, a man must know how to defend himself. After all, James Bond is the standard. I won’t bore you with details of how I got things fixed, but I need to mention that I got wonderful help from some friends as well as the Dutch Consulate. At last I had some luck on my side! The Honorary Consul of The Netherlands organised ‘Koningsdag’ in honour of the Dutch king. Venue: Windhoek Hilton. Wine: Arabella Merlot (recommendable). Menu: Herring directly flown in from Holland. ‘Long live the King! Hurray, hurray hurray!

But I didn’t come to Africa for sitting around in Windhoek. A plan had to be concocted as I was restricted to Namibia while I had to wait for my new passport. I am a cyclist, so I decided to explore potential cycling roads. As soon as my vehicle was fixed I drove South via Keetmanshoop and Seeheim to Ai-Ais where I camped. From there I explored the bank of the Orange River west towards Sendelingsdrif/Rosh Pinah. This is a beautiful area and definitely a mountainbike destination for my Dutch friends. Well, at least this alternative plan turned out successfully.

Unfortunately the next hiccup came quickly. As my GPS was stolen I had to rely on my T4A paper map. From a previous trip I remembered the ninety degrees turn west at Betta to Sesriem on the road from Helmeringhausen. I had to read a map and drive, and there were only roadnumbers indicated on the junction and no destinations, and the T4A map only gave the roadnumber once on a location I thought I had already passed. Thinking I was in Betta, I took a west turn in Spes Bona. This mistake resulted in a detour of 275 kilometres, ending up 40 km before Helmeringhausen where I had left that morning! (Please don’t tell anyone that I am a geographer of profession!)

In Swakopmund I met with Craig Milne with whom I toured Kaokoland in the past as well as with my Dutch friend Jel and his family. As my prescription sunglasses were robbed I ordered new ones in Swakopmund. I had to kill some time in Swakop and decided to further explore some cycling routes. I discovered a nice ride from Goanikontes Oasis to Welwitschia Plains, with beautiful views over the Moonlandscape. I added this ride to my cycling shortlist.

Shop: Get the Latest Namibia and Botswana Self-Drive Guide Books

My friend Jel and I had an appointment to meet at Ugab Rhino Camp. From Swakop I drove via Uis and the Brandberg White Lady Lodge of which I have good memories. This time round there were some mini-mosquitoes with a nasty bite. At Ugab I got a lovely surprise! A mountain biker arrived in camp. I rushed to this ‘colleague’ and so I met the one and only Mr Johan Snyman, the creator of authoritative publications on Damaraland and Kaokoland and a man at the cradle of T4A. (Nowadays he is exploring Bushmanland/Khaudum.) He had cycled all the way from Huab River to Ugab River and gave me his GPS track of the route.

The next day I drove with Jel and his family trough Divorce Pass via Doros Crater to Twyfelfontein. In my opinion one possible explanation for Divorce Pass’s name is that there are no roads to drive without women having to wear sport bras. The route from Ugab to Twyfelfontein has a lot of potential for a bike ride, although leopard definitely roam the area and I suspect there must be lion as well. We stayed at Mowani Camp and the next day I drove to Palmwag on my own.

Circling Etosha and Erongo regions back to Swakopmund

It was once again time to make a plan. The restaurant and terrace at Palmwag were being refurbishment and the campsite was full. So I camped in the parking lot for one night. The next day I left for Etosha via Kamanjab (a beautiful and cyclable road) and entered Etosha at the western entrance near Dolorite Camp. The plan was to stay at Okaukuejo but even the campsites were fully booked. What else could I do but press on to Outjo. Last year I stayed comfortably at Ombinda Country Lodge. This time it was a bit of a disappointment as a busload of football players physically and mentally occupied all the available space. At the campsite the neighbours started shouting at 04:30 and kept their car engine idling for half an hour.

At least I found comfort in a good lunch at Erindi Game Reserve. There were hippos, giraffes, a crocodile and a glass of wine. However, I had to return to Swakop to collect my sunglasses. On route I spent a night at Omaruru Game Lodge. There is a lot of game that come to be fed near the dining terrace in the evening. Yes, it is sort of a zoo, but for people who do not like roughing it this is a very nice alternative.

Back in Swakop I had time to sort out things with the police and consulate. However, I had a whole week before my flight home. This allowed me to do Tommy’s Living Desert Tour. This is a highly recommendable tour! Tourists come to Africa for the Big Five but Tommy shows them the Small Five living in the sand dunes of the Namib Desert.

After a bad start and a few subsequent hiccups I learned that making plans is essential. In spite of problems on the way I had a good time in Namibia. Never a dull moment and that is what life in Africa is all about!

(Words and photos by Frank Höppener.)