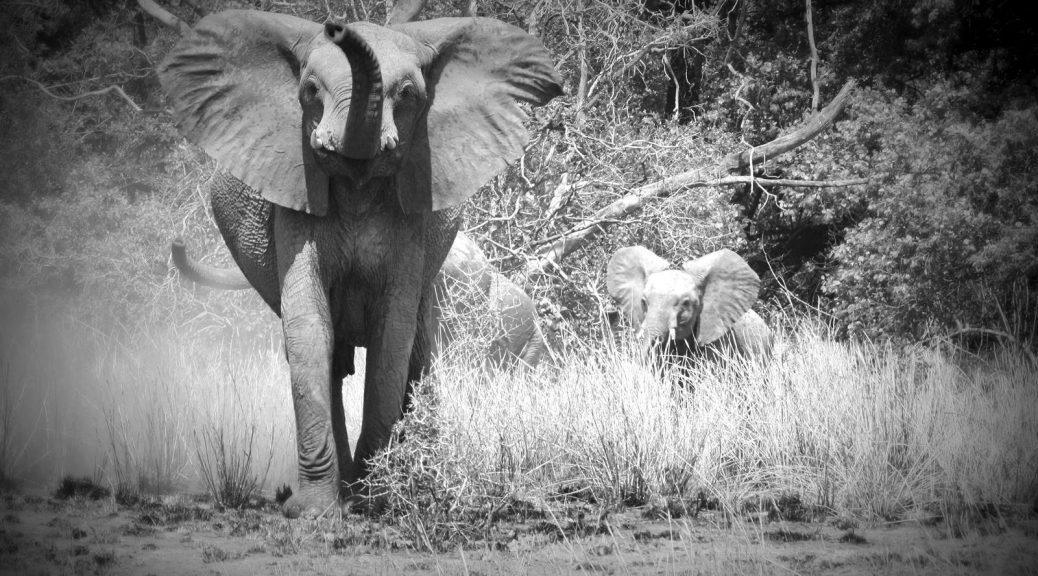 It was twilight and not a good time to be out on foot with predators lurking around. The next moment we were shocked to a standstill! A big elephant bull was standing a few meters from us, clearly annoyed with our intrusion. It is difficult to say who got the biggest fright, us or our armed guide!

This incident happened a few years ago when we went for a guided walk in Zimbabwe’s Mana Pools National Park.  Then, if it wasn’t for the flooded river crossing, we would have been back at camp well before dark.

In many game areas in Southern Africa the camps are unfenced, which means that elephant can visit at any time. We had an elephant visiting our site while we were pitching our tent and also at night whilst sitting around the fire.

In situations like that is important to remain stationary. Do not approach the elephant or try to chase it away. When we walked into the elephant at Mana Pools, we stood still for a few moments before we very slowly retraced our steps.  If you keep calm the chances are good that the elephant won’t see you as a threat and will mind its own business. Of course there are no guarantees, as these people experienced whilst eating breakfast in Mana Pools.

Remember that it is best not to take fruit into a game area where elephant reside.  Elephant love fruit (especially citrus and apple) and have been known to take desperate measures, even overturning vehicles once they get a sniff of this delicacy.

Most people love elephants but know that these placid giants can be extremely dangerous, especially when they have young. Elephants are very communicative animals and humans can read a lot in their postures, stances and gestures and by doing so, prevent themselves from getting into life threatening situations.

How to approach an elephant sighting when driving a vehicle

The following are the most obvious threatening behaviours displayed by elephants:

The elephant is standing or moving with her head held well above her shoulders, the chin is raised and the elephant looks down at her adversary over her tusks with eyes open and her ears maximally forward. The animal appears to increase in height and will sometimes deliberately stand upon an object such as a log or anthill in order to increase its height. (Elephants normally stand or move about with their eyes cast down.) A direct gaze with the chin raised as opposed to tucked in, looking down over the tusks, is primarily used by females as a warning toward non-elephant threats, such as predators and people, as if to say: “I’ve got you in my sight, so watch it”.

If the elephant shakes its head abruptly so as to flap the ears sharply, it is annoyed. The shake usually starts with the head twisted to one side and is then rapidly rotated from side to side. The ears slap against the side of the face or neck making a loud smacking sound. Head jerking (a single, upward movement followed by a slower return) and head-tossing (the head is lowered and then lifted sharply so that the tusks make an arc) are also mild threat displays.

The elephant faces an opponent head-on with ears fully spread (at 90 degrees from the body), presumably for the purpose of appearing larger. Elephants sometimes spread their ears when they are excited, surprised or alarmed.

Swinging the trunk forward and blowing it

The elephant swings and tosses its trunk in the direction of an adversary, typically while trumpeting.

The elephant bends or kneels down, tusks the ground and uplifts vegetation as a demonstration of “look what I will do with you”. It is mostly done by musth males.

The elephant rushes toward an adversary or predator while spreading its ears and just stops short of its target, swinging its trunk forward and kicking up dust. A mock charge is often associated with shrill trumpeting.

The elephant lifts or uproots objects and throws it in the direction of an opponent. An elephant’s aim can be very accurate, even at some distance.

The elephant causes a commotion to demonstrate strength, tossing its head and tusks back and forth through bushes or other vegetation while making a noise.

The elephant rushes toward you with its ears spread and its head raised or lowered while it has the apparent intention of following through. Its trunk may be tightly curved under so that the tusks can make contact first. A real charge is usually silent and extremely dangerous. Try to get away as quickly as possible!

See a full list of elephant behaviour, compiled by professional ecologist Audrey Delsink who is a member of the Elephant Specialist Advisory Group.

3 thoughts on “How to be safe around elephants”