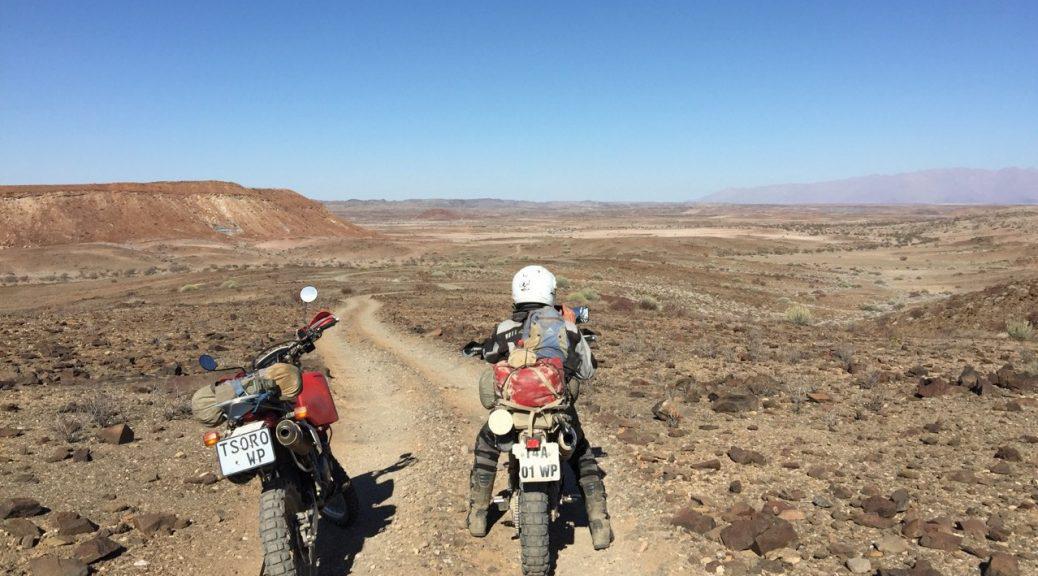 By Johann Groenewald (co-owner of Tracks4Africa)

People often wonder how Tracks4Africa started out.   Today’s company with twenty-odd employees and product representation all over the world started out as a simple quest for information.  I asked founder, Wouter Brand, to take me on a trip to see where it all began.  The mode of transport would be Wouter’s only manner of travel these days – motorbikes and the destination would be nowhere specific, other than the remote Namibian landscape.

Around the year 2000, GPS equipment became available for the recreational user and a few technically minded travellers quickly seized the opportunity to better orientate themselves to their surroundings.  Wouter recalls a trip to Namibia around that time with friends in  Kaokoland, which is a very remote part of Namibia and where getting lost is easy.  Knowing where you are is only part of the navigation story; knowing where to go is also vitally important.

Our trip started in George in the Southern Cape where I picked up Wouter and the bikes in our van.  As I was pressed for time I suggested that we transport the bikes to Windhoek from where the real action would start.

While GPS devices were readily available in 2000, they had no maps of any worth for the remote areas we now intended to travel.  At that stage manufacturers had the daunting task of mapping cities and national roads accurately enough to enable GPS navigation.  There was absolutely no focus on these remote parts of Africa, so travellers took it upon themselves to record tracks and waypoints which they then shared with one another.

Back then the only way of getting a route loaded onto your GPS was to transfer a track from somebody who had travelled that particular road. You could then follow it on screen, almost like we use the backtrack function these days.  You would also make sure that you recorded your own track as you drove because if you got lost you could retrace your steps.

Our trip in July 2016 would be very different.  We now have highly detailed paper and GPS maps of remote parts of Africa and our bikes are fitted with GPS’s and these latest maps.  On our first day we set off for Uis, the unofficial gateway to Damaraland.  We left the tar road at Okahandja and rode through the Irindi Private Game Reserve to Omaruru from where we continued to Uis. We stopped at intersections to check our maps as it is often difficult and always dangerous to read the map while riding, especially on unpaved roads.

On that first day I had to meet and get acquainted with my borrowed iron horse; it was a very long time since I was last on a motorcycle as a youngster. Getting used to the feeling of the bike slipping over the little sand berms on the gravel road was my main priority.

I met Wouter in 2001 and at about that time Tracks4Africa was born when a name for this community of travellers was suggested by Johan Strumpfer.  A website was created where these travellers could upload and download tracks and waypoint files.  Although the sharing of data was structured, no maps were available yet.

I had a very basic background in GIS (a Geographical Information System is a computer system for capturing, storing, checking and displaying data related to positions on earth’s surface) which I shared with Wouter.  He was a data analyst and as such used to writing his own software to achieve complex calculations.  Soon Wouter was compiling all the tracks and waypoints that had been uploaded by travellers to the website onto a map of Africa. There were no procedures and we had to make them up as we went along.

In very much the same way, but with modern equipment, we decided to travel around Brandberg.  Basil Calitz from Brandberg Rest Camp in Uis accompanied us on his Africa Twin to show us a few hidden gems; one being this stunning Quiver tree with Brandberg in the background.

Basil returned to Uis while we continued to Ugab Rhino Camp, passing Elephant Rock on the way.  There is now a new community campsite at the rock which we duly added to the map; the T4A traveller never being off duty!

As we entered the Ugab Riverbed, we had to negotiate the deep sand through the canyon.  Whilst we did not see any game it was a truly spectacular place to be and we were later informed that the elephants were on the White Lady side of the river.

As we exited the river to head north to Twyfelfontein, we had to negotiate Divorce Pass which is steep and rocky and got our adrenaline pumping. We were relieved to reach the top unscathed.

Whilst riding I was reminded of T4A’s development, when in the year 2003 we stumbled upon software which enabled us to create a map that would be compatible with the GPS we used.  Up till then we only had a map in raw GIS format; thus it was a great moment when we could load our own map to the GPS.  It was not routable (it could not give point by point directions) but we could load all our data at once onto the GPS instead of loading the individual tracks and waypoints.

I still recall testing this very first map on a trip in the Mkgadikgadi pans in Botswana – another place where one can get seriously lost.  Friends were following us as I drove. The route wasn’t clear, so I followed the GPS. When we emerged at the main road an hour later everyone wanted to know what this amazing ‘GPS-thing’ was which had given us the correct directions.  The greatest endorsement came from my wife who finally trusted the gadget I had been playing with.

Back to the present, after day two, Wouter and I found ourselves in Aba-Huab Camp in Twyfelfontein.  There we met another lone biker from the US.  At dinner he explained to us that he wanted to do this trip ‘unplugged’.  No GPS for him, only paper maps which he had bought at the airport. I told him they were only good for lighting the fire and gave him our T4A Namibia paper map.  He would not discard his own paper map, however, as he had made notes on it as he travelled I could not help but think that he was basically redrawing a bad map to try to make it useful.

The next day we rode together to Palmwag.  It was very uneventful gravel riding after the Desolation Valley.  After lunch we headed for Kamanjab and just as we took off, the American’s bike broke down.  He had a number for someone in Kamanjab which he called for a pick up but I whipped out my Tracks4Africa Guide App and gave him two numbers for garages in Kamanjab, one marked as a tow-in service.  I think it then dawned on him just how convenient it is to have information at your fingertips when you need it.  Being unplugged only gets you so far.

After we created the first GPS map, things really got underway at Tracks4Africa.  The community realized that we now had the power to create our very own map of Africa, just the way we wanted it.  The T4A forum became a place where specifications were debated and new ideas presented.  It grew into a very lively discussion and years later we were told that it was a great example of open innovation where users give input as to how the product should develop.

Rules had to be established for putting data on the map.  We applied a ‘three recordings rule’ which said that three independent recordings of a remote track had to be submitted before it would go onto the map.  We also quickly realized that not all waypoints submitted should be included, e.g. the location for where ‘lion killed springbok’ did not make the cut.  But there was a great energy as like-minded travellers contributed years of travel experience.  We realized that it wasn’t merely a map, but a record of the collective travel experience of the Tracks4Africa community.

Wouter and I decided next to head to Henties Bay from Kamanjab.  As he had just had a shoulder operation eight weeks before the trip, we ruled sand and technical riding out and stuck to the gravel roads.  Between Uis and Henties Bay I started feeling a new sensation on the bike which turned out to be a flat tyre.  This resulted in my first lesson on fixing a tyre on the side of the road.  Wouter is a master of the craft and showed me his side stand hoist method of raising the wheel off the ground.  It still took us an hour to get the job done and made me realize how exposed one is on a bike.

Riding into Henties Bay it was misty and cold as we hit the salt roads and we gladly resolved to take a warm bed instead of a tent.

The Tracks4Africa map really grew from strength to strength in the years to follow and various mile stones were reached.  Even though the business really started when we sold the first commercial version of the map to cover costs, it was still just a hobby on the side.  Then in 2007 Tracks4Africa was the first company to offer a routable GPS map from Cape to Cairo… the rest is history. Wouter had to really pull out all stops to achieve this.

Back to the present and Wouter bid me farewell in Swakopmund after a daunting 70km in the mist from Henties Bay.  I had to get back to Windhoek and he was visiting friends in Walvis Bay.   On my way to Windhoek I had the inevitable second flat tyre, 50km from Okahandja.  As Wouter had all the tools and spares on his bike, I could luckily call on my good friend Mossie who stored the van for us, to come and collect me. Thanks partner!

But there is another trait of the honey badger which is very apt to Tracks4Africa founder, Wouter Brand.  Like the hyena and leopard had to admit defeat to the much smaller but ferocious honey badger, Wouter will not stop at anything and nothing will get him under.

Wouter is a true pioneer and it is only through his dedication that Tracks4Africa has become what it is today.  He would not like me to say this but he has survived cancer for three years now and even with the shoulder operation shortly before our trip, he still got on his bike and rode like the wind.  I salute and thank you for your guidance and the path on which you have set us all. It is an honour to count you as a friend and to have you as a business partner, Wouter.

As a parting note I have to say that the Tracks4Africa community is its essence.  Thank you to the people who call themselves Tracks4Africa data members; each one of you is a legend of independent travel in Africa.  If it wasn’t for you, sharing your data and experience, Tracks4Africa would not exist. Equally important are the map users who contact us with corrections. This is the best way we know of to map Africa.

9 thoughts on “Finding the roots of Tracks4Africa”