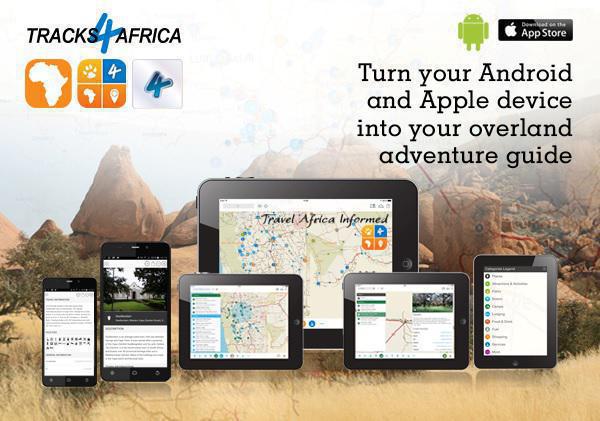 Autumn 2016 is an exciting time at Tracks4Africa as we have just launched an update of the Botswana paper map and the long-awaited Android version of the T4A Guide App, which was launched last year for Apple devices and very well received by travellers.

With modern-day electronic devices such as smartphones and tablets, the technology used on the road by travellers has developed to such an extent that Tracks4Africa had to rethink the way in which it makes its traveller information accessible. Tablets specifically give you a big enough screen, a fast enough processor, an integrated GPS, camera and communication capability.

The App is not a routing/navigation tool, but even though it will not navigate you on a turn by turn basis to a destination, it automatically solves more than half of your navigation problems since it shows your location accurately  as you travel, on an excellent map with good guide content, and it plots your intended destination with equal accuracy. 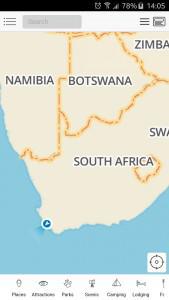 The good quality and visually appealing map, aimed at the needs of a self-drive traveller, is available offline, together with a host of valuable information about camping, lodging, eating, fuel stops, shops, services, attractions, places and many more Points of Interest around you, supported by photos where available.

The map works like a web map and you can zoom via several layers of detail down to an approximate scale of 1: 150 000.  The map is loaded onto your device, so is completely offline and can be used in the middle of nowhere without the need for an internet connection.

The generic App is free and contains samples of the map and guide information.  If you like what you see, simply go to in-app purchases and buy the particular country map with its complete guide that you need for your next trip.

The map regions available on the App are:

The Android App is available from Google Play and the Apple version from iTunes.

The guides are sold according to year e.g. Namibia 2016 edition. Tracks4Africa will provide free updates for one year after your initial purchase has been replaced by a new edition.  In other words, if you buy the 2016 edition, you will receive updates throughout 2016 and 2017. You can obviously continue to use your existing guide for as long as you want. It does not expire.

The 4th edition of the Botswana paper map, printed on PolyArt (a top quality tear and water-resistant paper) at a scale of 1:1 000 000, has also just been released.

Features of the new map include:

The map is available from our online store.