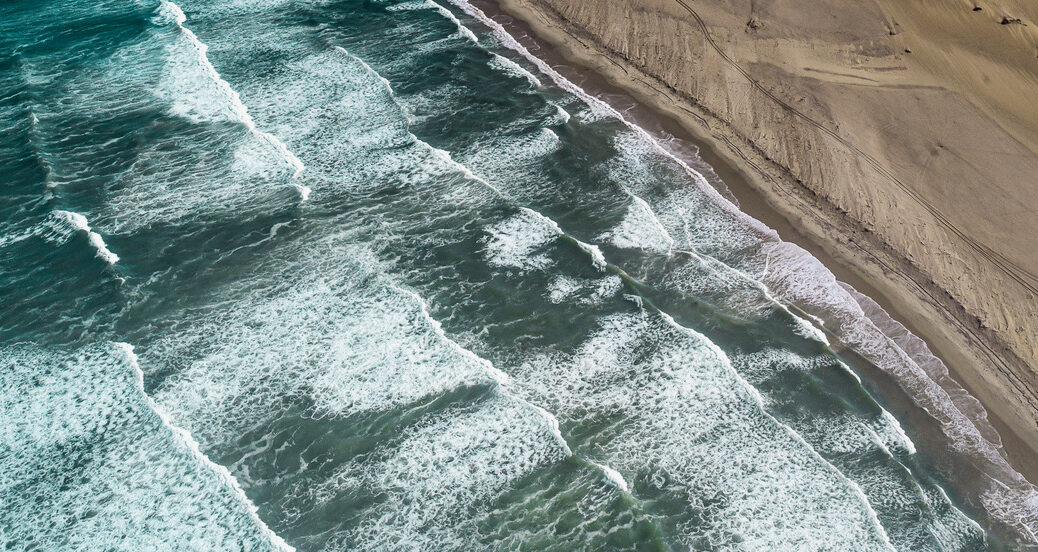 The Skeleton Coast’s endless beaches, crashing waves and rolling dunes are breathtaking, but the area is remote and inhospitable. A flying safari makes that beauty accessible and offers a unique perspective. Tracks4Africa traveller Laura Griffiths explains what to expect.

The Skeleton Coast, a 500km long coastal stretch in northern Namibia, is wild and unwelcoming to inexperienced overlanders. Huge waves crash onto a shore littered with whalebones and shipwrecks, while towering dunes stretch deep inland, creating a sea of sand. For Laura Griffiths, experiencing the Skeleton Coast was a treasured dream.

Overlanding has become a way to travel with her husband and adult daughter. On the Griffiths’ first trip to Namibia, they got a taste for the desert scenery and diverse wildlife on land and in the ocean. “We love the wide, open spaces and rugged beauty of Namibia, the harshness and splendour of the desert and the secrets to be found in both plant and animal life.”

Why a flying safari?

The southern area of the Skeleton Coast, from the Ugab River up to Torra Bay, is freely accessible with a permit. However, the northern section to the Kunene River at the Angolan border can only be visited with a tour operator holding a concession and special qualification.

“There was no other way for us to experience the Skeleton Coast than to join a guided safari. The terrain has to be navigated by people equipped and knowledgeable about the conditions and pitfalls.” Skeleton Coast Safaris is a family business that offers flying safaris out of Windhoek. They also operate tented camps located in the desert along the coast, from where 4×4 game drives through dunes, riverbeds and in search of desert-adapted game are done.

“My hopes were to see the wild, desolate expanse of the desert – an area that is remote and hostile to humans. And the actual coastline, so notorious for its icy currents, blinding fog and tragic shipwrecks. Also to see the desert-adapted animals that literally eke out a living in that environment.”

How to get there?

You can fly into Windhoek and depart on the Skeleton Coast flying safari from there. For the family the trip was part of an epic Namibia tour and they drove up. “It was a practical way to enjoy so many of the interesting places along the way in our own time. We love the 4×4 experience and the road trip is always a great part of the holiday.”

What does the flying safari entail?

“From Eros Airport we were soon on our way west to Swakopmund. We did a southward loop along the coast to take in the Eduard Bohlen wreck and Sandwich Harbour before landing in Swakop to refuel. Then off again along the magnificent coastline, wild and wonderful. We could see white, frothy waves rolling in and thousands upon thousands of seals down below.” The first night was spent at Kuidas Camp, which offered the opportunity for a late afternoon drive around the area, with the rocky landscape and Welwitschia plants as highlights.

An early morning walk was a chance to see rock paintings in the mountains behind Kuidas Camp. In the afternoon they left for their next destination, Leylands Camp. “We first landed at Terrace Bay for coffee on the beach and a Land Rover excursion into the dunes. We arrived to clifftop chalets and had drinks on the deck with spectacular views of the sun setting.”

The long trip northward called for an early morning departure. They flew along the coast to escape the heat coming up from the desert sand before turning inland to the camp. “The Kunene River curved in and out between the dunes. We saw our lodge before landing on a strip some 50 minutes’ drive away. The scenic drive to camp was dramatic in its beauty.” The boat trip on the Kunene was a bit of a (mis)adventure as the engine cut out midway. Luckily they managed to reach the shore downstream.

The last day started with a dune drive, taking in the magnificent views. “On the return journey we drove to the top of one of the dunes for a tip-over and drive down the leeward side.” Stormy weather on the return flight made for a bumpy ride. “The skies were full of rain curtains and sunset colours – spectacular. After the desert, Windhoek was wonderfully cool.”

The flying safari makes use of a 4-5-seater Cessna. As Laura explains, it was suitable for their family of three, the guide and the pilot as there is a jump seat in the back for an extra person, although ideally seats four. “The plane is fairly noisy, although we were able to communicate through headphones. Mostly low flying was the order of the day for viewing purposes.”

“I didn’t find anything challenging about the flying itself, although as a photographer, I found it frustrating to not always be able to get the right angle or a clear view. The space was too confined for long lenses between the camera and the window. Our pilot made me quite envious when he described a flight on which the windows had been removed so that camera lenses could project outside. That is a photographer’s dream, but as a holiday option it was perfect.”

What should you prepare for?

Anyone going on this trip needs to be prepared for rustic accommodation, the possibility of a bumpy flight, little luggage, and plenty of heat and dust, Laura cautions. Nothing extreme at all, but it is not suitable for people afraid of flying or who want luxury accommodation.

Aside from seals on the beaches, you probably won’t see animals from the air. They tend to stay near the water sources and in the shelter of riverine trees or rocky outcrops. All of the game viewing on Laura’s trip was on drives along the riverbeds.

It’s a good idea to take binoculars, as well as field guides that cater to your interests. “Our guide focused on the geology – we would have liked some information on history, botany, birds and the local people too.” Maps are useful to get a sense of perspective on where you find yourself.

What is the final verdict?

“My best memories are of the landscapes and being able to see them in a ‘big picture’ from the air. To see where the wind had shaped the dunes and how there could be a blue river running through a granite black canyon,” says Laura.

Unfortunately there were several niggles, partly because the camps had not operated for a while due to Covid. The boat breaking down on the Kunene was symptomatic. Despite the problems encountered, Laura doesn’t regret it for a moment. “We would never have seen the beauty of the desert, nor had the intimate contact with it that we did, had we not taken the flying safari. The journey was a ‘forever’ in my mind, being able to experience the off-the-tourist-track beauty of that ancient desert.”

If you want to explore Namibia, our Namibia Self-Drive Guide is just what you need. Along with destination information and accommodation listings, it’s packed with practical advice for self-driver travellers. The special atlas section contains the Tracks4Africa maps that overlanders rely on while the distance table features travel times between major destinations.