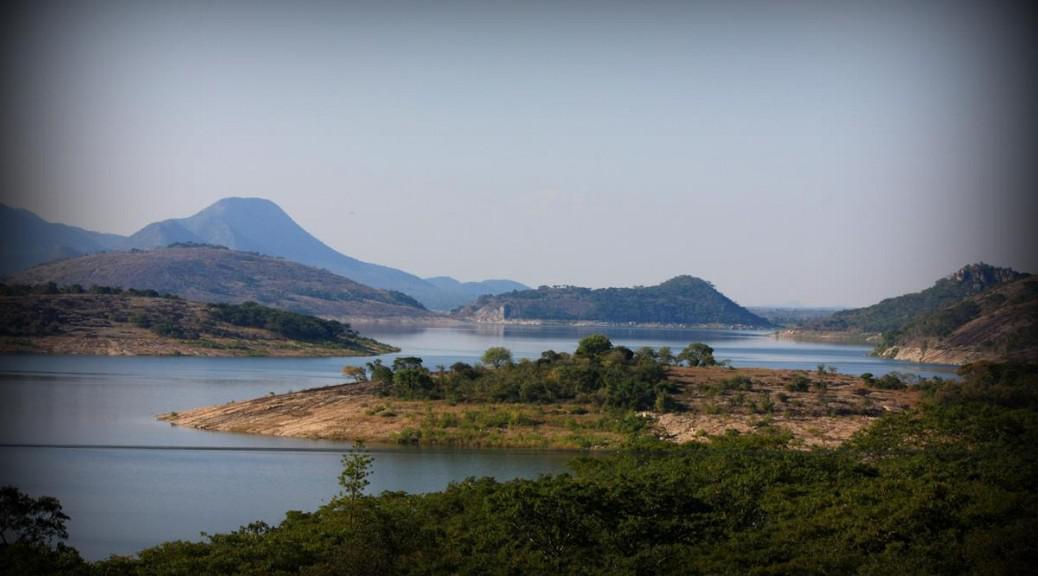 From Gonarezhou we headed for Matobo National Park. After a quick ‘B’ service on the Hilux in Chiredzi, during which we shopped and continued the eternal search for an internet connection, we headed north towards Lake Mutirikwi via Zaka, passing through picturesque rocky granite koppies. 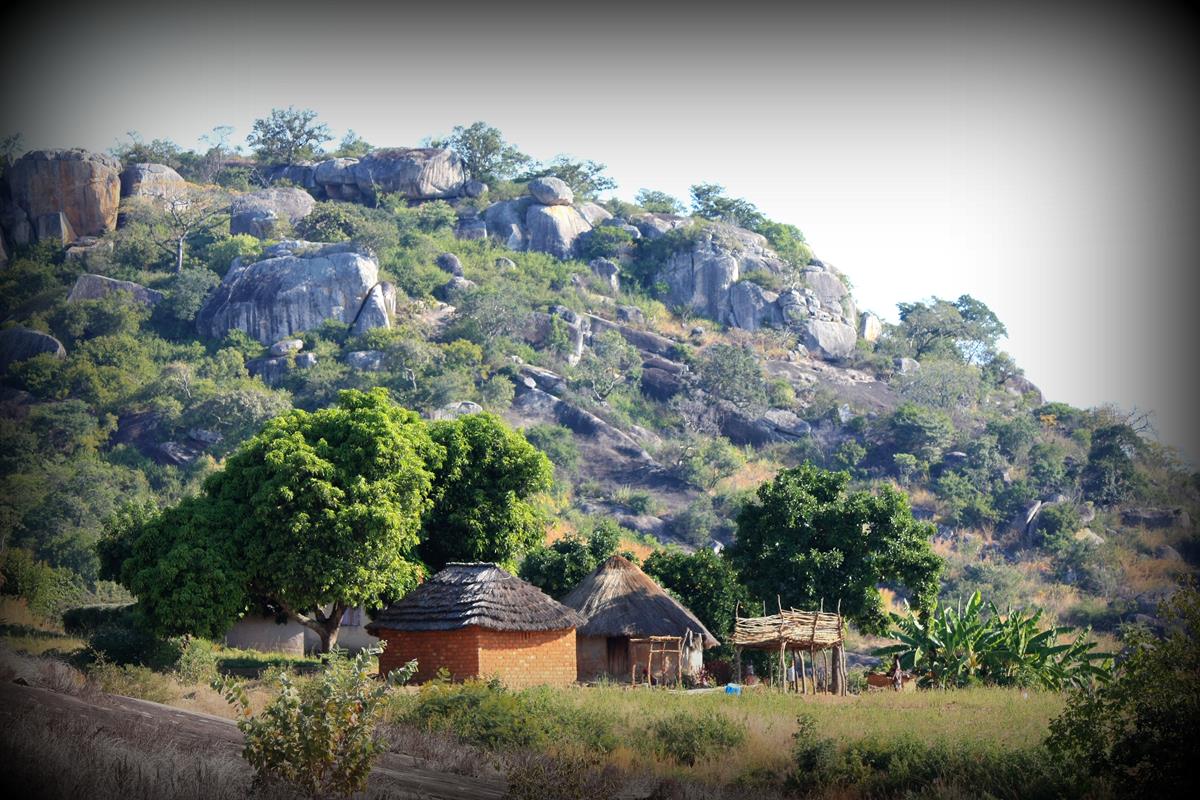 Beautiful huts amongst the granite koppies.

These were just an appetiser for what we would see along the Glenlivet road, where we closely skirted the lake to the east and south. Huge black domes of smooth rock dominated the vistas with the road snaking its way between them. The blue waters of the lake occupy every crevice of its dissected shoreline, appearing on the map like a giant nerve synapse, with large and small vegetated bouldered islands peeking out.

Norma Jeane’s Lodge, our destination, proved to be just as perfect as I remembered it from a visit some 14 years ago. Manicured gardens, an immaculate campsite and ablutions and friendly staff hosted us for two days whilst we caught up with computer work and other chores. We were surprised to hear lions roaring in the early morning and were informed that the Parks Board kept them in an enclosure across the lake.

After I managed to post the blog in Masvingo while Pete did some more shopping, we set out for Matobo National Park with the GPS set on shortest route. This took us on the most rural of back roads, many washed out with only animal tracks on the sandy strips. Nearer the park we encountered charming rocky granite koppies, thickly wooded with mature msasa trees.

Nearly at our destination, sloppy vehicle performance indicated our first puncture (caused by an 8mm bolt). With the light fading we chose to pump it and press on.

Matobo National Park is a gem. It is renowned for the Matobo Hills with its massive boulders and balancing rocks. It almost resembles the playground of a giant boy with huge rocks stacked up like building blocks. 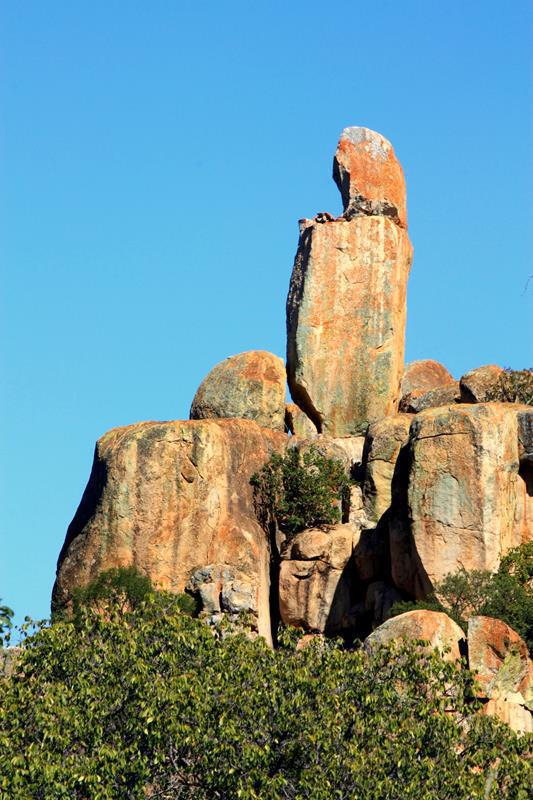 Huge boulders are stacked on top of each other.

We drove towards Maleme Dam campsite with the golden light of the late afternoon showing off the tawny grasses and beautifully bouldered koppies, many of them displaying their earthy colours to full advantage.

Arriving just before it got dark we drove down a steep hill between two massive granite rocks standing sentry above the dam and being in a hurry, we trusted the GPS instead of the warden’s directions and turned left for what later turned out to be the picnic site. We hastily built a fire and organised ourselves, as there were no showers. The temperature plummeted next to the dam and we were grateful for the warm blaze of the cosy fire and the hot water from the jerry can to wash ourselves. 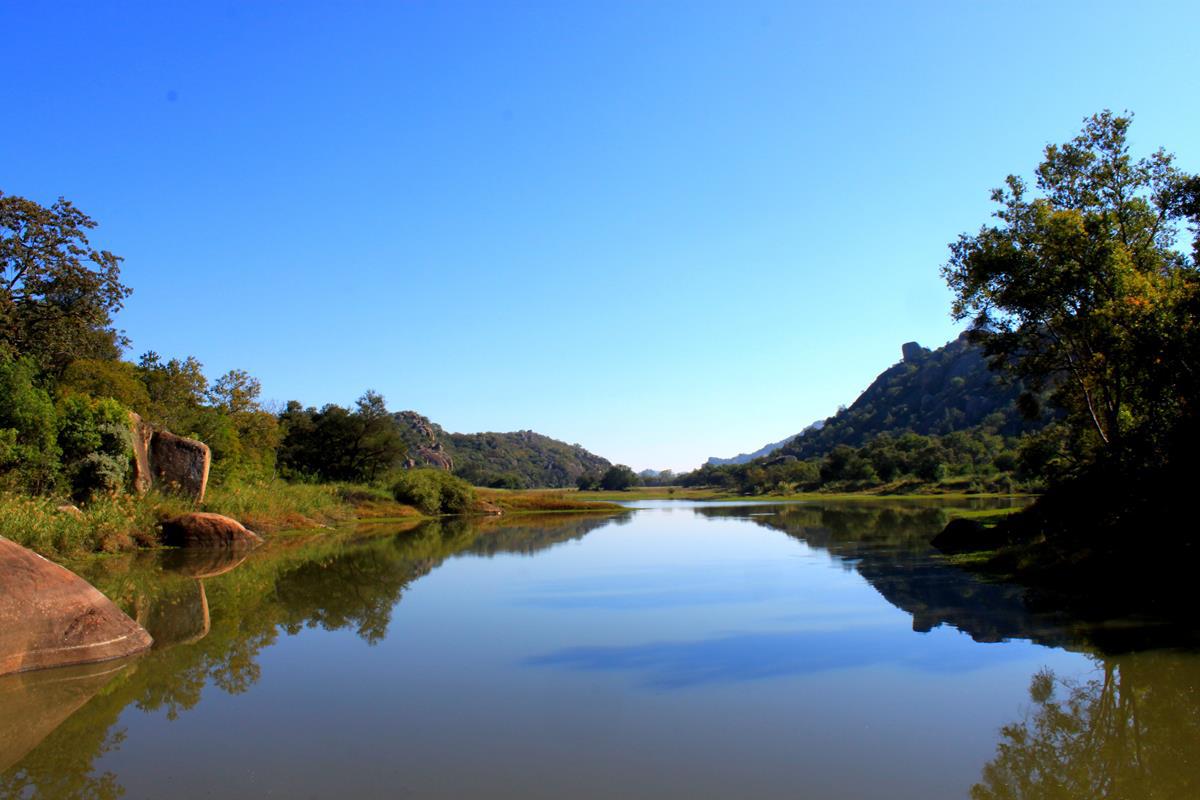 Matobo is the oldest protected area in Zimbabwe, declared in 1926. It is a small park, only 440 square km, and was declared a World Heritage Site in 2003 because of its cultural significance and diverse environment. 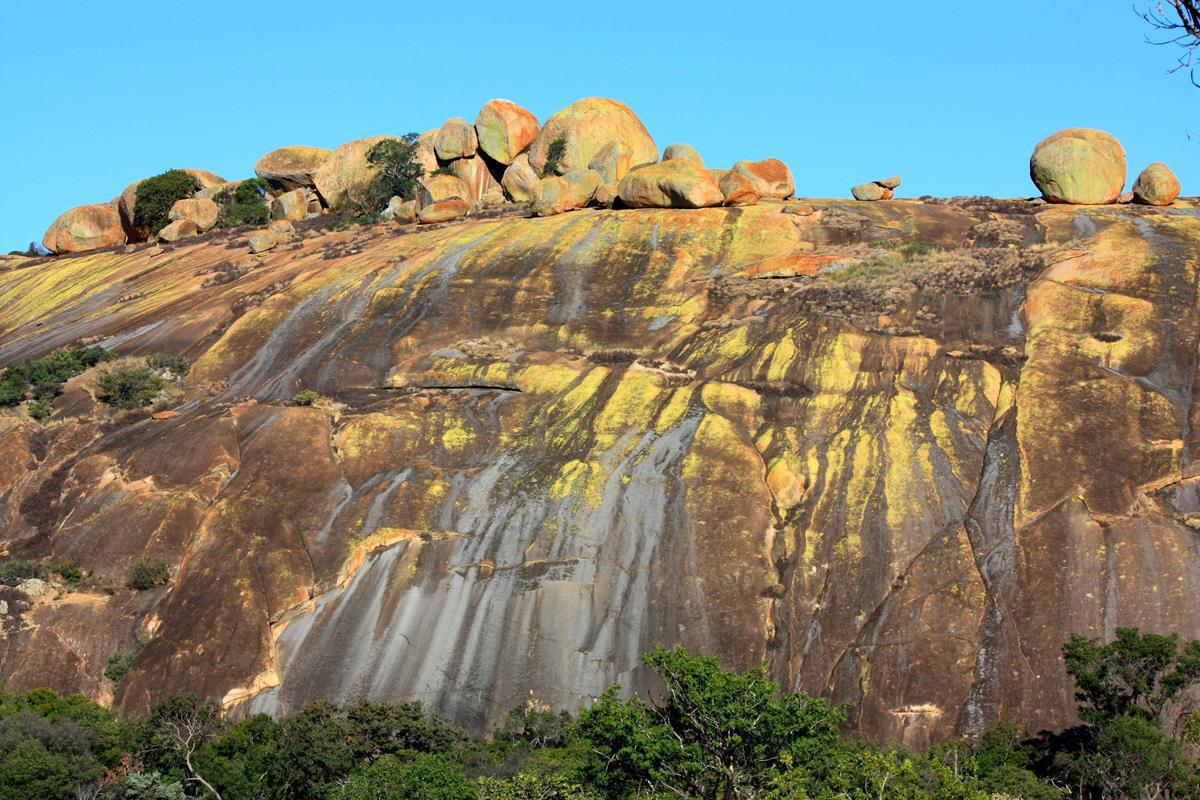 Some of the colourful boulders of the Matobo Hills.

Matobo means ‘bald heads’, an epithet said to have been conferred by Mzilikazi, founder of Zimbabwe’s Ndebele nation. Interestingly both him and Cecil John Rhodes chose to be buried in the Matobo Hills.

The area is rich in history and culture. Numerous caves with Bushmen paintings give clues to the early human inhabitants of the area. At Pomongwe Cave thousands of Stone and Iron Age artefacts are on display. Some of them date back as far as 14 000 BC. 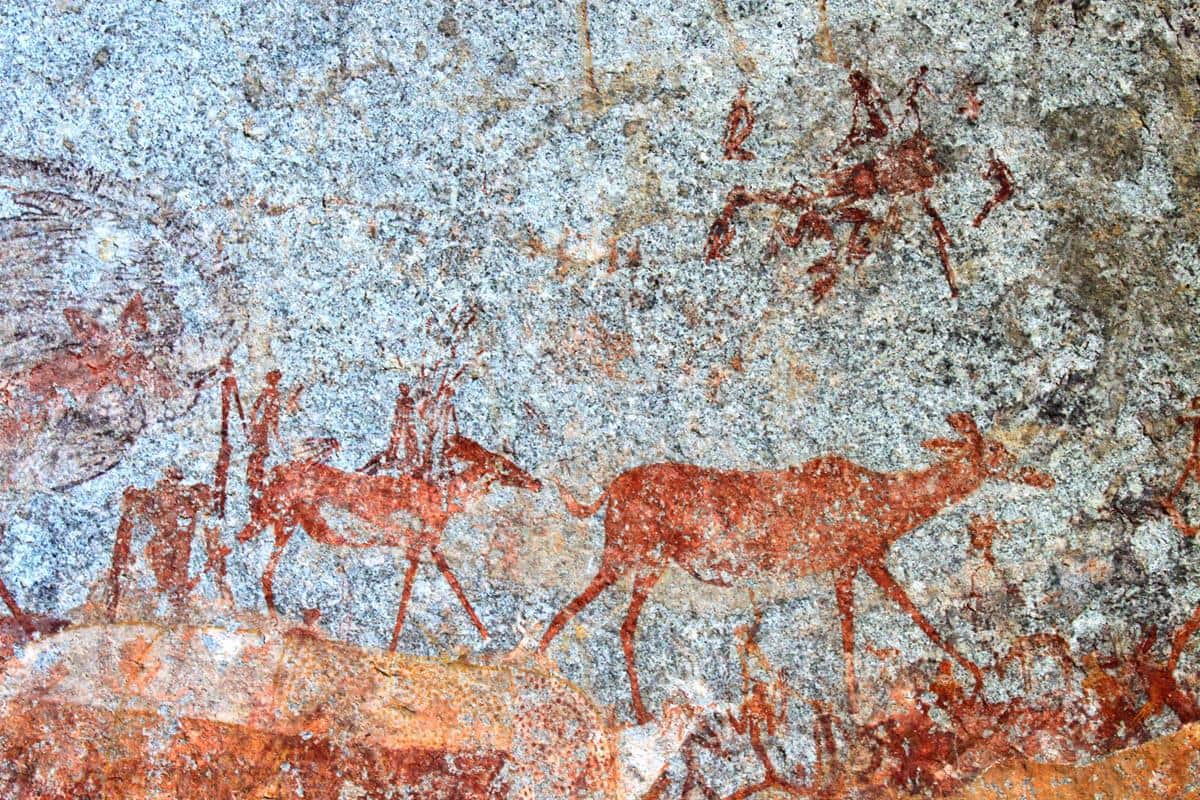 The rock paintings of Matobo are very well preserved.

The next morning we awakened to the lonely, plaintive cry of the fish eagle and the staccato alarm calls of a troop of baboons. Braving what almost felt like frost, we breakfasted and after Pete plugged the puncture, went off to explore the western region, hiking a short way up to Nswatugi Cave, with its smooth hollow dome and excellent bushman paintings. 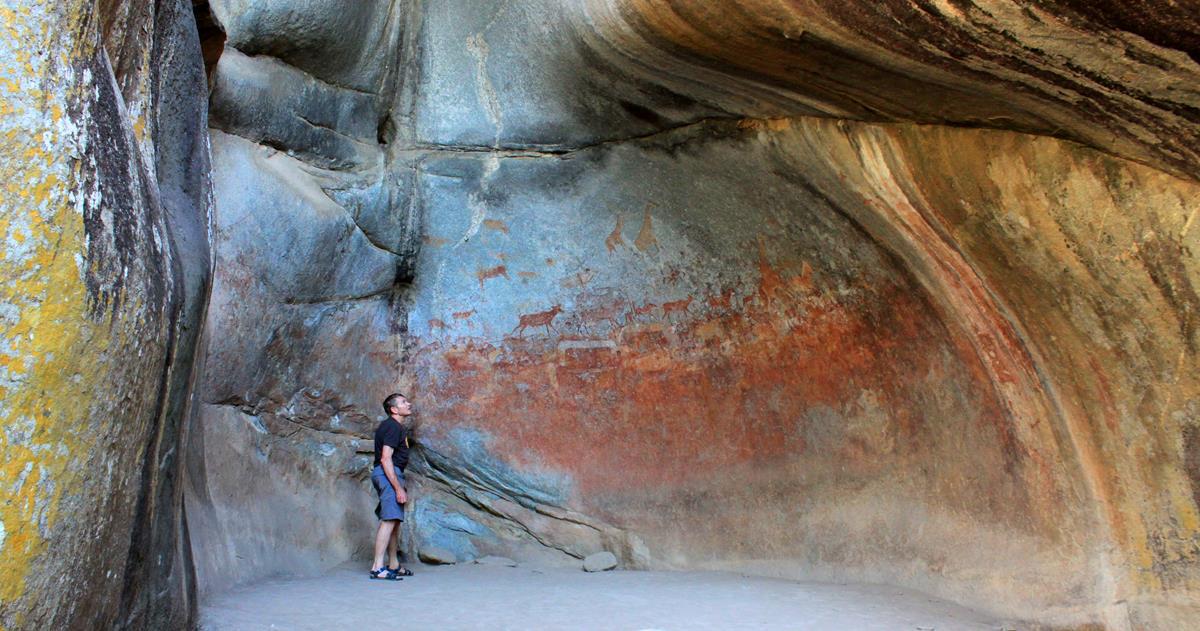 After wildlife was reintroduced, the western quarter was designated as a Game Park in 1963. Here we had our first good hippo sightings of the trip. Apparently the park has black and white rhino and it is said to host the largest population of the endangered Black Eagle.

We had coffee and lunch stops at Mezilume and Mpopoma Dams but as the facilities were minimal with no water and only dilapidated ablutions, the lure of the hot showers that we had discovered that morning at the ‘real’ campsite at Maleme Dam encouraged us to return for a second night.

With the GPS reading four degrees Celsius the next morning, we set off for a last quick drive around the central section and discovered that the park entry fees don’t include access to the World Heritage Sites such as Rhodes’ Grave, World’s View or any of the caves, rock paintings or shrines. It was interesting to note that the colonial history regarding the establishment of Rhodesia (now Zimbabwe) has been preserved at the ticket office.

For us the natural beauty of the park with its amazing rocky outcrops and dwalas (whale-back mountains) was enough and we opted not to pay extra on top of the park entry fees. Instead we decided to head north-west for the shores of Lake Kariba…

There was a technical problem with our vehicle tracker but we’ve been told that it has been sorted out and it should be possible to follow our actual route on the live map.

2 thoughts on “Minor gems of Zimbabwe”