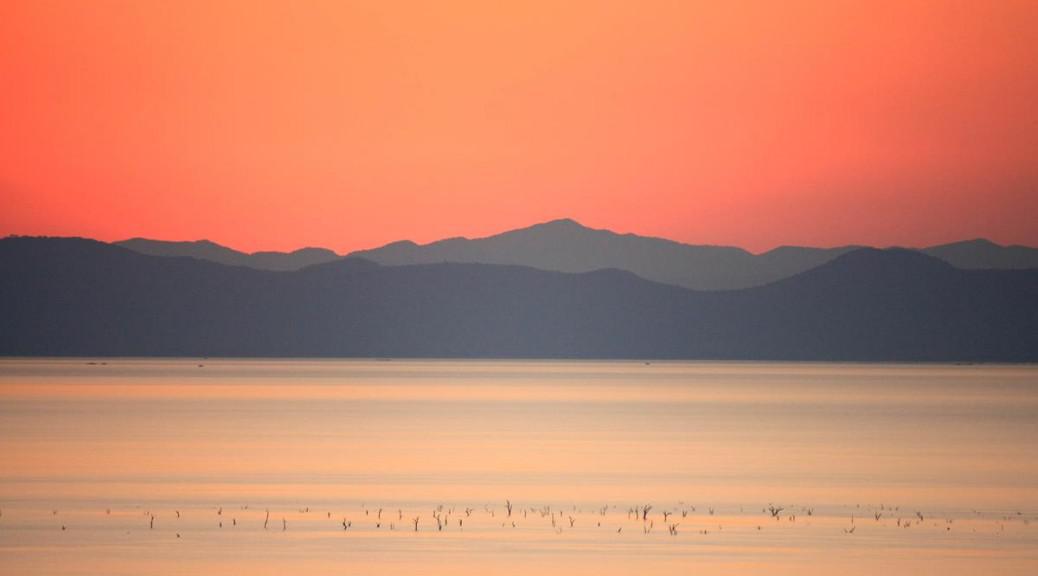 A gentle breeze from the water cools the hot day and a fish eagle calls every now and again as I look out over the blue expanse of Lake Kariba. The water gently laps the shore and I drink in the peace and quiet, sitting here at Musumu Lodge campsite near Binga.

We decided to give Hwange a miss and rather explore the southern shores of Lake Kariba.  The road to Binga heading north from the Cross Roads junction on the A8 ‘highway’ was surprisingly good with only a few stretches badly potholed.

As we dropped down to the Zambezi Valley majestic baobabs dotted the landscape.

Masumu Lodge is perched up on an outcrop overlooking a narrow section of Lake Kariba.  Picturesque thatched stone chalets, each with their own view of the lake, blend tastefully into the surroundings and we again had the pick of the camp, opting for a site with a lake view.

TJ, the camp manager, told us he had inherited an almost derelict camp three years ago. With a start up fund of US$400 and some cleaning materials, he had developed it to its present excellent state. As he was pre-baiting an area in preparation for the arrival of a keen fishing client, he suggested that we may enjoy an outing with our rods to try to catch some bream for dinner.

We were up at first light and after a short, fast motorboat journey across the lake we tied up to two tree stumps and reacquainted ourselves with the messy job of baiting hooks with squirming, muddy earthworms. Across from us a small party of local fishermen were steadily hauling in bream, fishing off some rocks where there was less of a risk of a croc attack than on the sandy beaches.

Crocodiles are present in abundance along the shoreline of this huge lake, along with plenty of hippos. One thing that we have learned over the years from avid fishermen on Kariba is that you NEVER wash your hands in the lake.

For me being on Kariba epitomises paradise: the tranquility of the water mass, the stark cries of the fish eagles and happy snorting of the hippos (almost as if they are laughing) fill the air and the friendly rays of the sun warm the soul…

With the sun starting to bake and enough bream in the keep net for a good supper we headed home for coffee and rusks.

Keen to commence one of the wilder sections of our Zimbabwe journey, we left the next day and headed north east for the Chizarira National Park. The road into the park was very bad and after we had signed in through the entrance gate it got even worse as we climbed up onto the Chizarira hills and headed for the parks office. There we learnt that for almost R900 per night, including the vehicle and park entry fee, we could enjoy the luxury of a long drop toilet but no water at the campsite. 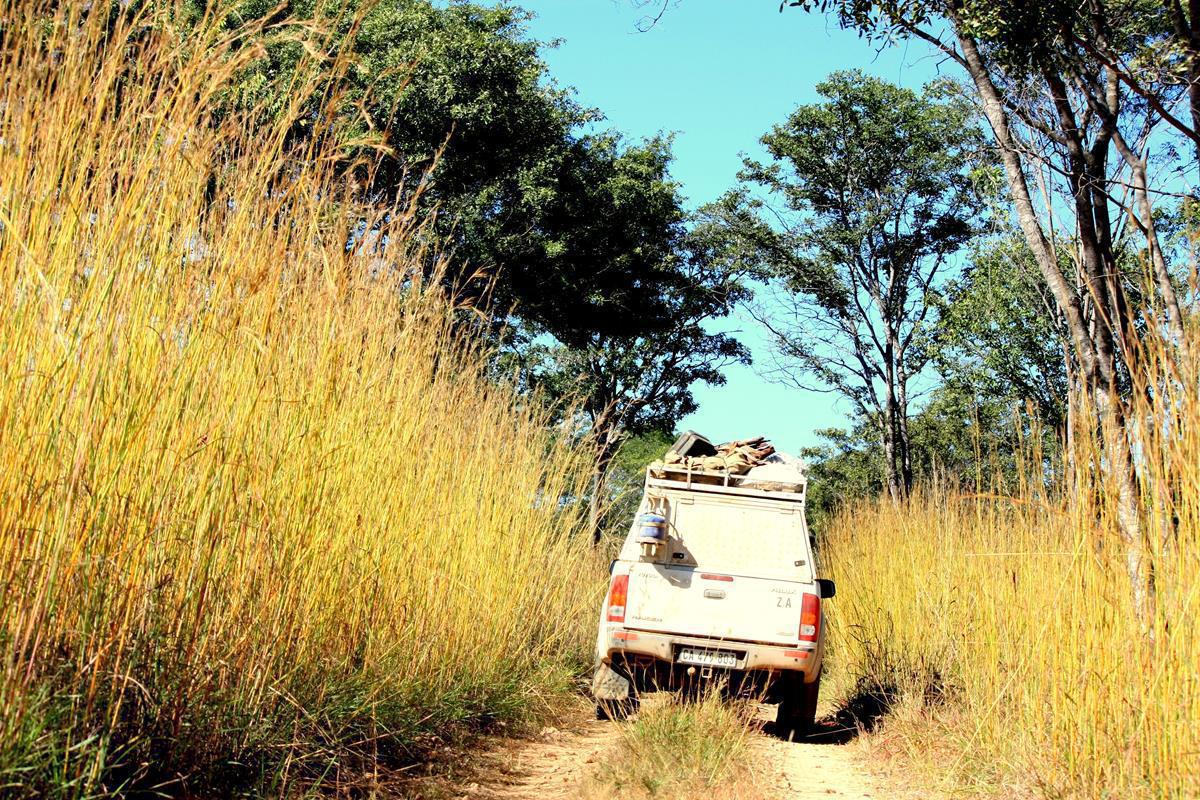 Long grass on the way in to the Chizarira National Park.

We decided that it wasn’t worth staying there. What game there may have been was invisible in the thick bush and, as we didn’t feel that the fee was nearly worth the experience, we decided to leave. On the way out we passed by the impressive Mucheni Gorge viewpoint.

We traversed the bad road, taking about 45 minutes, back to the gate. However, the gate was firmly padlocked and the gate guard stood his ground. He refused to unlock it until we had returned to the office and paid US$26 to cover our personal and vehicle park entry fees.

As our entry was recorded in his register he would be charged should he let us depart without payment, even though we only drove into the park and out again after we decided that the park was  poor value, especially compared to Gonarezhou and Matobo National Parks which we felt offered a lot more.

We thought that this was blatantly unfair but we had no choice as to pay the park entry fees. We had a rather unpleasant interlude with the guard but at least he was willing to take our money and make the payment on our behalf at the office the next day. We learned that it is best to ask about conditions and entry fees before entry into a park.

By then it was 4pm and as we were in the middle of the bush with no campsite near, we decided to bush camp whilst still on the slopes of the uninhabited high ground. A short way down the road there was an opening and we drove a few hundred metres off the road to find a level, clear patch. There we raised our rooftop tent and, thanks to the overflow of elephant from the park, there was plenty of firewood around to heat up the wash water jerry can and keep any wildlife at bay.

We got an early start to explore the roads leading north to Lake Kariba. TJ had warned us about the atrocious road into Matusadona National Park, asking how many spare tyres we carried and said that there would be absolutely no chance of help in the event of a problem. This road is seldom used, thus poorly maintained and its condition exacerbated by the recent heavy rains.

We both wanted to see the famous Bumi Hills which is on Lake Kariba, just west of Matusadona. The road in was patchy; some good, some mediocre and some downright terrible with mud holes and washed out rocky descents.

Once at the lake we discovered that the only establishment was the 5 Star Bumi Hills Hotel, built on top of a hill with a commanding view north of the shoreline and water. Catherine, the general manager could hardly believe that we had driven in. All their guests either fly in or arrive by boat from Kariba town. She later mentioned that they only get about three vehicles driving in each year, the last being Kingsley Holgate.

As they have no campsite we were happy to bush camp again but she discouraged that because of the high concentration of big game on the shoreline and suggested we camp in the hotel grounds. She very kindly made a bathroom available to us.

The hotel is immaculate, with fine gardens and a swimming pool set under huge mahogany trees, the brimming weir blending seamlessly with the view of the lake far below. Offshore a large wooded island dominated the foreground. We gazed in awe as six elephant came down the red sandy shore to drink.

At sunset we returned for photos and a drink with Catherine and her staff at the bar. As darkness fell a string of bright lights became visible along the centre of the lake – Capenta fishing boats which have these lights to attract the little fish which they catch by the millions in their nets, providing an important source of protein to the local people.

Despite many efforts we haven’t yet been unable to pick up any information about our intended route south of the Zambezi, heading east from Mana Pools which would lead us to Mukumbura where we hoped to re-enter Mozambique. To our surprise one of the Bumi Hills staff members knew that area well. He reckoned our planned route was feasible and reassured us that after our drive in to Bumi Hills, that route shouldn’t pose too many problems.

Not wishing to outstay our welcome we moved on the next day to Tiger Bay which is situated near the mouth of the Ume River.  Surprisingly the road was good, having been graded just a month ago and we were quickly established in the grounds of what we imagined would soon become a derelict lodge, but at least provided toilet facilities and deep shade. This fishing camp has sadly seen better days and perhaps declining numbers of visitors make it difficult to maintain the once beautiful, two storey thatched lodges.

However, this setting epitomises Kariba for both of us. We were situated on a tiny, elevated peninsular on the bay, looking towards the Matusadona Mountains. Stark stumps of dead trees still rise from the shallower areas of the lake, indicating that there was forest here nearly 60 years ago before the dam wall was built. We heard lion and hyena whilst sitting by the fire and that night elephant came feeding within 10m of our tent.

These stumps serve as perches for the array of water birds who feed from the waters of Lake Kariba. During the day the lake seems peaceful and quiet and it is only at night that you really become aware of the dangers lurking in the water. Then the hippos come out to graze, audible just metres away from our tent, and when we shone our spotlight on the water we realised that there are many more crocs around than what were visible during daytime.

In search of the Saynati Gorge

Curious to see this area we skirted Matusadona National Park and after asking directions along the way, took a minor circuitous route north that eventually led to the escarpment. The descent was rough with beautiful scenery and vegetation, but slow. Expecting to bush camp that night we were surprised to find Gache Gache Lodge, arriving as the sun was setting.

Advised that it was impossible to get closer than 5km to the Sanyati Gorge we nevertheless set out the next morning into this hunting area on the lake flood plain where we saw a herd of nearly 200 buffalo, impala, waterbuck and a large troop of very big baboons. 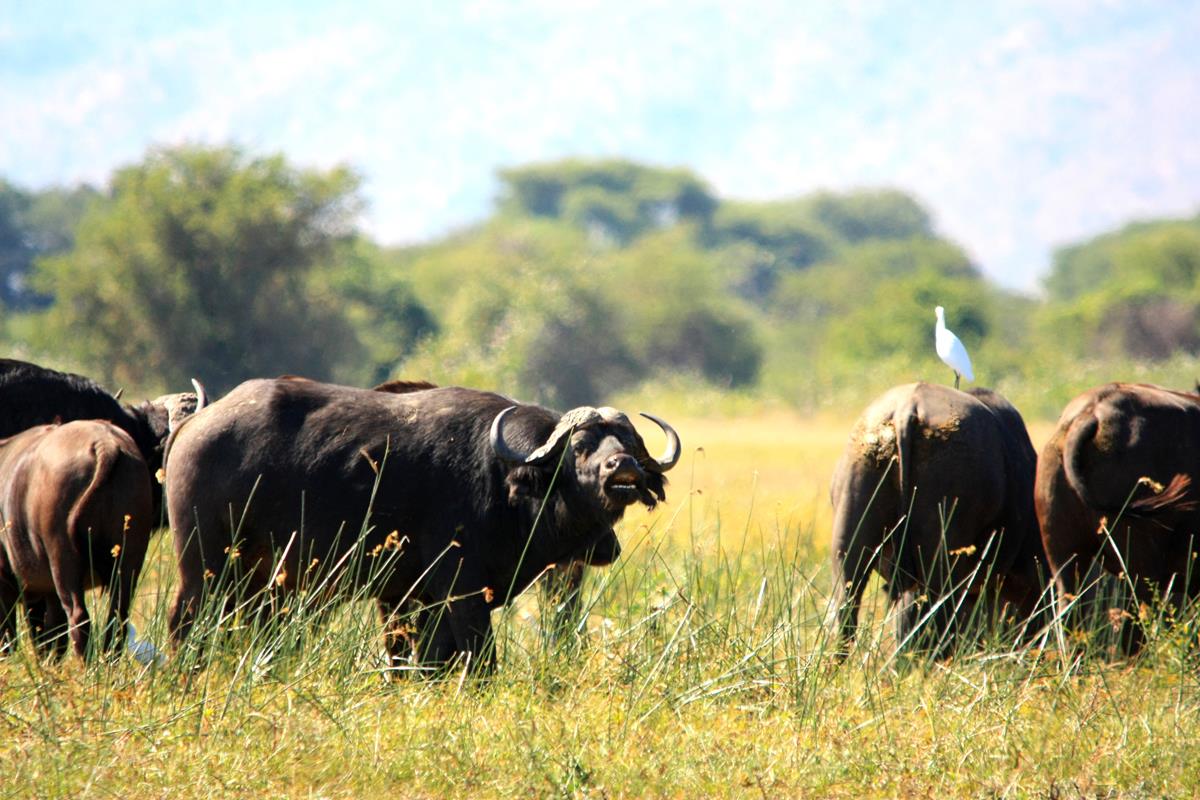 A big herd of buffalo on the floodplain of Lake Kariba.

As much as we were looking forward to Mana Pools, we were sad to leave the peaceful shores of Lake Kariba behind…

6 thoughts on “Exploring the southern shores of Lake Kariba”