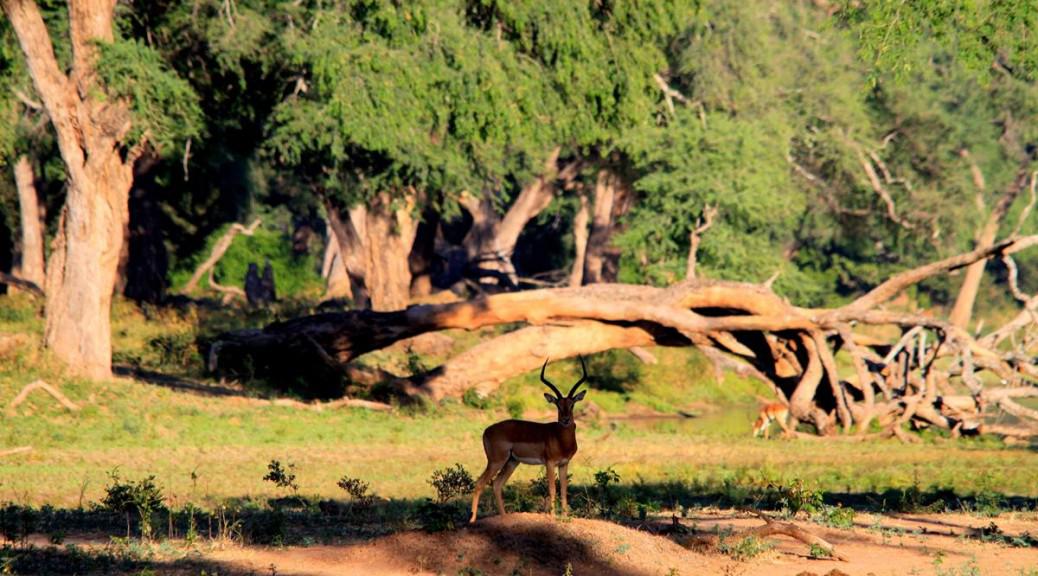 Mana Pools is one of those very special places in Africa that deeply touches your soul. Once you have been to Mana you will always yearn to return. We both have been to Mana before and we agreed that it would certainly be one of the highlights of our trip.

Used as local people are to poor roads, they seem to regard them all as okay if they are passable. And so it was with the drive in to Kariba village with good gravel surfaces giving way to deep ruts or worse as soon as we managed to get up to 3rd gear. Astonishingly, we even met a fully loaded bus negotiating these routes, wondering how it got around the tight, steep detoured sections where bridges had washed out. One tactic we saw involved unloading all the passengers to lighten the load.

We spent most of the morning in Kariba town eventually managing to change our intermittently leaking punctured tyre for a new spare. Pete learnt that we had (optional extra) steel tyre retention bands on the rims, which would make a tyre change in the bush even more difficult than it was here. After re-fuelling, re-gassing and stocking up our pantry, we headed for Mana Pools National Park.

A steep, twisting road took us down the escarpment to the Zambezi Valley where we stopped at the National Parks Board Marongora office to get our permit for Mana Pools. Having learned our lesson at Chizirira NP, we enquired about the park fees in advance.

The gravel road into Mana is as badly corrugated as ever but fortunately it does improve over the last 45km. We heard at Bumi Hills that Mana had recently had 200mm of rain but we were still surprised to find it so green and lush.

At Nyamepi Camp the Zambezi River is the fullest we have ever seen it and flowing fast because, as we had learnt at Gache Gache, the low level of the lake is due to water being drained to allow a repair to a crack in the dam wall. We didn’t have the normal ‘dagga boys’ (lone buffalo bulls) and elephant visiting the camp, possibly because there is plenty of standing water in the veld.

However, we still awoke to the cry of the fish eagle and went to sleep with the happy cacophony of the hippos. Along with the magical beauty of the flood plains which were dotted with game, we were also lucky to see two hyena, a pride of eight lions and an elephant cow and two youngsters grazing knee deep in the purple flowering water hyacinth.

Our initial night was very quiet but the next a hyena came to within a metre of our tent after we went to bed and it was amazing to be within almost touching distance of such a powerful animal. Unlike that at Chipinda Pools this one wasn’t at all disturbed by our torch light.

It had been scavenging the remains of some coconut oil that a baboon had spilt after it had opened five zips and the velcro of our ground tent. The baboon had also managed to switch on Pete’s electric tooth brush inside his toilet bag, but, as we remarked to the office staff, fortunately hadn’t started its dental routine before we disturbed it. Later that night we had a good view of a hippo coming to graze on the nearby river bank.

Mana Pools National Park covers 2200 square kilometre of fertile riverine terraces formed as the mighty Zambezi River flows eastwards. The park has many seasonal pools around which acacia, mahogany, tamarind, fig, sausage and rain trees proliferate. In the dry season the wildlife moves down from the hills, drawn by the lush vegetation and the remaining water in the pools and the river.

The Park actually occupies a relatively small part of the Zambezi Valley; much of the rest has been proclaimed as safari areas for controlled hunting. By chance Pete spoke to a safari operator who confirmed that a track existed leading east towards the highly recommended Chewore Camp.

We were up at first light to explore this route, part of which was not on the GPS. As we neared the eastern Mana Pools boundary the track became very overgrown and some of the river crossings were quite steep. However, once entering the Chewore Safari area we found to our amazement that a newly graded narrow road took us all the way to Chewore Camp.

As we approached the road wound its way through a beautiful mature Acacia forest. The camp is situated high on a river bank overlooking the confluence of the Chewore and Zambezi Rivers. This is an A-class fishing camp with each site equipped with a large deep freezer, own ablutions and braai.

That night the flood plain in front of our campsite came alive under a half moon with dozens of hippos, waterbuck and elephant. During the time spent in this area we once again realised how diverse life is on our planet. From the brightly lit firefly to the soaring eagle and the immense elephant, every form of life is interdependent in this amazing creation.

3 thoughts on “The magic of Mana Pools”