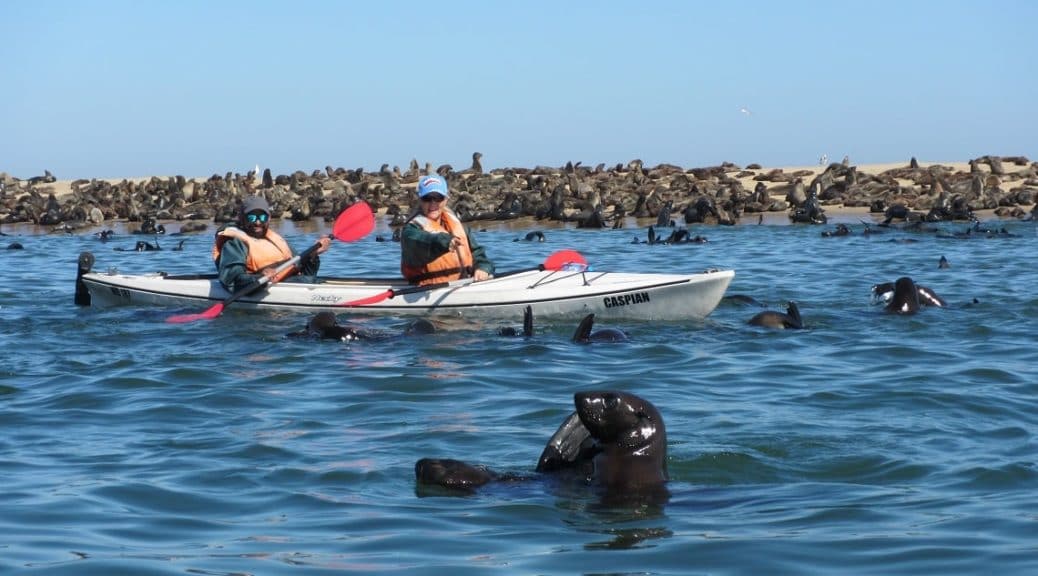 A self-drive trip through Namibia, undoubtedly one of Africa’s most iconic destinations, is like opening a box of candy. So much to do and, often, so little time. Knowing where to go and what to see makes all the difference. Tracks4Africa’s LIZETTE SWART shares five of her favourite activities.

The town of Maltahöhe is not on many travellers’ bucket list, but few know about the rare phenomenon that occurs after good rainfall on the farm Sandhof, just 40km north of this small Namibian town. Leliepan, an enormous 800-hectare dry clay pan, only fills with water after good rains. And in Namibia, that’s not all that often. When it does rain, usually in January or February, the normally bone-dry pan comes alive.

Within days, thousands of Sandhof lilies unveil their white to pale-pink flowers and the pan is covered in a carpet of blossoms. The flowers last just a few days and turn a darker pink before dying. That’s if they’re not devoured by red lily weevils that appear and disappear at the same time. Also found at Leliepan, bushveld vlei lilies are fertilised by the weevils and seeds are dispersed into the water.

T4A travel tip: To experience Leliepan’s floral beauty takes some planning and luck. Stay in contact with the folks at Maltahöhe Country Hotel, the oldest such inn in Namibia, and enquire about rainfall and the depth of water in the pan. Once good rainfall is confirmed, you have about 10-14 days to get to Maltahöhe. Entrance tickets and directions to Sandhof Farm can be obtained from the hotel. The hotel itself is worth the visit for its display of relics from bygone times.

At the beginning of the 20th century, an estimated 100,000 cheetahs roamed Africa and Asia. Sadly, threats such as habitat destruction and elimination of predators by farmers have seen their numbers reduced to just some 7,000 individuals. Today, more than 3,000 call Namibia’s wide open landscapes home.

While it is possible to visit breeding centres in South Africa, the captive breeding of this endangered species is not allowed in Namibia. Conservation centres such as the Cheetah Conservation Fund (CCF) in Otjiwarongo focus on providing a home for cheetahs that are unable to return to the wild while educating the masses on this spotted cat.

Good to know: A visit to CCF includes a short introductory video, a visit to the education centre and an informative walk. Walks starts at 09:00, but to truly experience the magnificence of the fastest land animal, the cheetah run at 08:00 is highly recommended – that’s when cheetahs are exercised by chasing a specially made lure. Be sure to book in advance by calling the centre on +264 (0)67 306 225 or sending an email to bookings@exclusive.com.na.

If the smelly boardwalks of the Cape Cross Seal Colony do not appeal to those with a more delicate constitution, kayaking amongst seals from Pelican Point in Walvis Bay may be a viable, though more adventurous option. Pelican Point is a natural sand bank formed by the periodic flooding of the Kuiseb River that stretches for kilometres into the Atlantic Ocean. The result is a beautiful protected bay with minimal waves. Kayak tours take place in the mornings to avoid the area’s strong afternoon gusts.

Good to know: Kayakers are collected in Walvis Bay and transferred to Pelican Point via a 4×4 vehicle. The 40km journey will take you through one of Namibia’s first Ramsar wetland sites, proclaimed in 1995 and home to 11 endangered bird species. Keen birders can be on the lookout for unusual sightings such as the Terek sandpiper and red-necked phalarope. The Pelican Point Lighthouse, erected by the South African Government in 1932, signals the approach to the launch site, and pretty soon you will be kitted out with protective gear, lifejacket, kayak and paddles.

T4A travel tip: Intensive paddling is not essential – some inquisitive seals will pop their heads out of the water next to your kayak. The more playful may even try to grab your colourful paddle. Heaviside’s dolphins (also called Haviside’s dolphins) frequent the bay and if you feel energetic enough to get the kayak moving at a reasonable speed, they may accompany you for a few metres. Good luck keeping up!

In 1851 explorers Francis Galton and John Anderson were the first Europeans to record the existence of Etosha Pan. Meaning ‘the great white place’, the vast pan is so large that it can be seen from space. When rinderpest broke out in 1897, the colonial authorities of German South West Africa erected quarantine stations at Okaukuejo in the west, Namutoni in the east, and a quarantine cordon between the two stations along the southern edge of Etosha Pan.

Once the rinderpest was under control, the military fort Okaukuejo Tower was built in 1901 (the present watch tower was erected only in 1963). Today, visitors can climb to the top to enjoy a panoramic view over the pan.

T4A travel tip: Do visit nearby Namutoni Fort, declared as a monument in 1947. For a short while, it was used as accommodation for tourists when Etosha Game Park opened its gates in 1958. The fort was renovated in 1983 and is still open to tourists, but visitors to the fort’s courtyard are limited. Be sure to stop at the African art and craft shop situated in the western corner.

Peckish after all the sightseeing? Namibia’s bakeries serving traditional German confectionery and quality coffee provide welcome refreshments to thirsty travellers. Some of my favourites include Outjo Bakery, McGregor’s Bakery in Solitaire (famous for their apfelstrudel), Café Anton in Swakopmund, Kaffeestube in Omaruru, Brewed Awakenings in Okahandja and Willi Probst in Walvis Bay.

Share your travel experiences with us! Send an email to newsletter@tracks4africa.co.za and your adventure could appear in Tracks4Africa’s monthly newsletter.