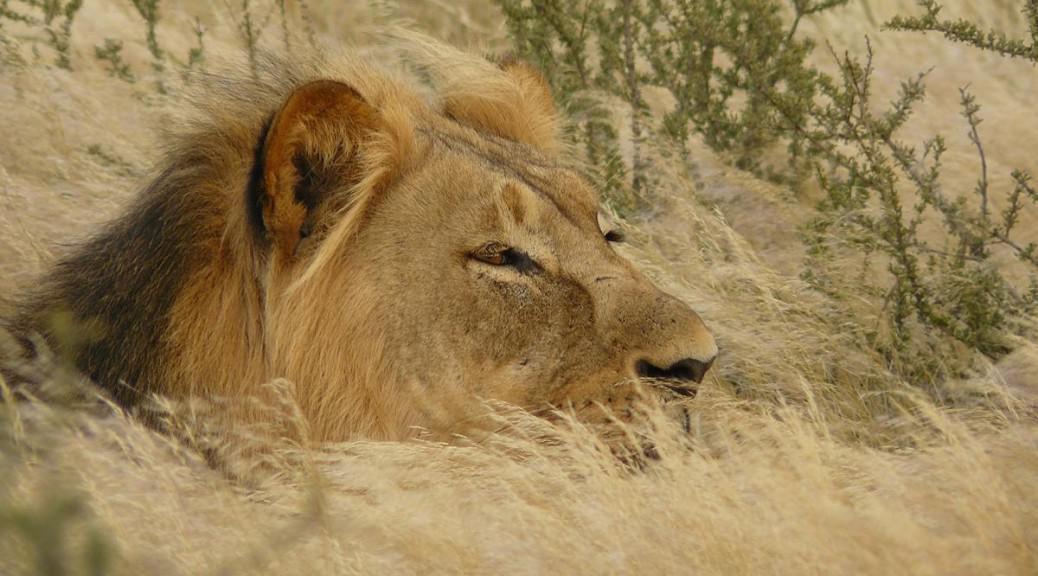 The Kgalagadi Transfrontier Park straddles the border between South Africa and Botswana and covers a total of 3.6 million hectares. It comprises two adjoining national parks: the Kalahari Gemsbok National Park in South Africa and the Gemsbok National Park in Botswana, which includes the Mabuasehube Game Reserve. The Botswana side is almost triple the size of its counterpart but less developed.

The park is spared the usual effects of human greed by its extremes in temperature and rainfall. These range from -12◦C to 43◦C in the shade and between 50 mm and 800 mm per annum, with an average of 200 mm. Rain can be torrential and when the Nossob and Auob Rivers start flowing a miracle happens: lungfish emerge after hiding for as long as ten years underground and you find frogs everywhere.

In the old times wildlife was so abundant that reports say it took a herd of springbok three days to pass. Unfortunately there were no hunting restrictions in the British colonial time and periods of drought as well as poaching had a negative impact on game numbers. The worst drought in recent memory struck the Kalahari between 1980 and 1986. Unfortunately wildlife numbers dwindled considerably over this time but thanks to conservation efforts the park today again has a diverse and healthy game life.

The Gemsbok National Park in Botswana was gazetted to run due east for 25 km (if I remember correctly) from where the gate of Twee Rivieren Camp was at that time and turn northerly to a prominent sand dune named after a dog called‘Fly’. The poor dog was accidentally shot at this dune by his own boss.

The demarcation team was in a hurry to get the job done. Everyone knows the sun rises in the east so they started demarcating in what they thought an easterly direction was. However, as it was winter they were about nine degrees out. When the professionals of Surveys & Lands arrived they had progressed about 23 km and were aiming more or less straight to Fly’s Kop. It was decided to leave things as they were and this mistake is noticeable to this day.

Because of the climate the Kgalagadi has never been viably farmed. During World War I the South African government wanted to control the movement of the German Schutztruppe in what was then South West Africa. To achieve this, they drilled a series of boreholes along the Auob River to supply the South African troops with water. Poor people who were hired to guard the boreholes, got permission to settle there and attempted to farm.

However, the guards turned farmers were half forgotten and farming proved unsustainable. The farms were abandoned over time and the boreholes became waterholes for wildlife.

Names of the waterholes

The names of some of these waterholes seem quite out of place in the Kalahari but were given by the Scottish lieutenant/surveyor Roger Jackson who beaconed off the farms. Until this day Scottish names like Craig Lockhardt, Strathmore, Dalkeith and Montrose persist.

The Kameelsleep borehole got its name because the last giraffe (kameelperd) was shot there and dragged along the border to the Botswana side.

Characters of the Kgalagadi

In 1902 British Lieutenant Arnold W. Hodson crossed from the Nossob Valley via Mabuasehube to Kokong by oxwagon, more or less on the route of the present Nossob/Mabuasehube Wilderness Trail. He lived from hunting and his water came from tsammas (wild melons used as a source of water by the San). This was a true achievement, as on his trip he found the remains of a man who had left a letter to his wife before he died from thirst and whose body was then devoured by hyena.

There are rumours that a lost city exists somewhere in the park. A certain Mr. Farini wrote a book entitled ‘Through the Kalahari Desert’ about his expedition up the Nossob Riverbed in 1885 when he ‘discovered’ remnants of a big civilisation located about a six days’ trek to the east of Kij Kij borehole. Even though no proof was found of this lost city, his tale still persists.

Grootkolk borehole which is just south of Unions End was drilled around 1905 by the German Schutztruppe when they invaded the Bechuanaland Protectorate (now Botswana) in pursuit of Herero fighters under the command of Simon Cooper. Cooper and his men were defeated near Polentswa Pan.

Suicide
In 1958 German geologist Hans Schwabe died when he walked a considerable distance along the Nossob River Valley prospecting diamonds illegally. His car was found at Kwang Pan and his remains near the confluence of the Polentswa and Nossob Rivers. They consisted of no more than parts of his skull and feet, his drinking tin and geologist pick.

Vet Piet (Afrikaans for Fat Piet) wasn’t that fat at all. He earned his name as a child when he refused to eat bread if it wasn’t dripping with animal fat. I admired the man for he was a superb tracker who could read the bush as if it was a newspaper. Unfortunately he died in a car accident in 2004 but this true Kalahari son is honoured with a signboard at Thirteenth borehole in the Auob Riverbed.

I still do not understand why no statue was ever erected at Twee Rivieren for the Le Riche ‘dynasty’ that managed the park so well for decades, first Joep and later his sons Stoffel and Elias le Riche. A statue of the true Kalahari son Vet Piet would be equally appropriate.

Bantsi Bantsi was under game warden Abraham Modo (deseased) responsible for the Gemsbok National Park. He was an outstanding game scout, supervisor of Swartpan game scout camp and explorer of what is now the Kaa Trail. He is still alive but retired and lives in Serowe.

The Auchterlonie museum just off the Auob River track is a wonderful source of information on the history of the park.

If you plan on visiting the Kgalagadi Transfrontier Park, don’t go without the T4A Botswana Self-Drive Guide that has loads of information about the park and the newly updated T4A Botswana Papermap.

As a youngster from Holland Frank Höppener was commissioned as District Officer Lands in the Kgalagadi District in 1986. He spent three years in Tsabong and ever since he has an irresistible urge to return to the Kalahari regularly. ‘The Kalahari sand sticks, not only to the feet but predominantly to the mind,’ he says.

7 thoughts on “Stories of the Kgalagadi Transfrontier Park  ”