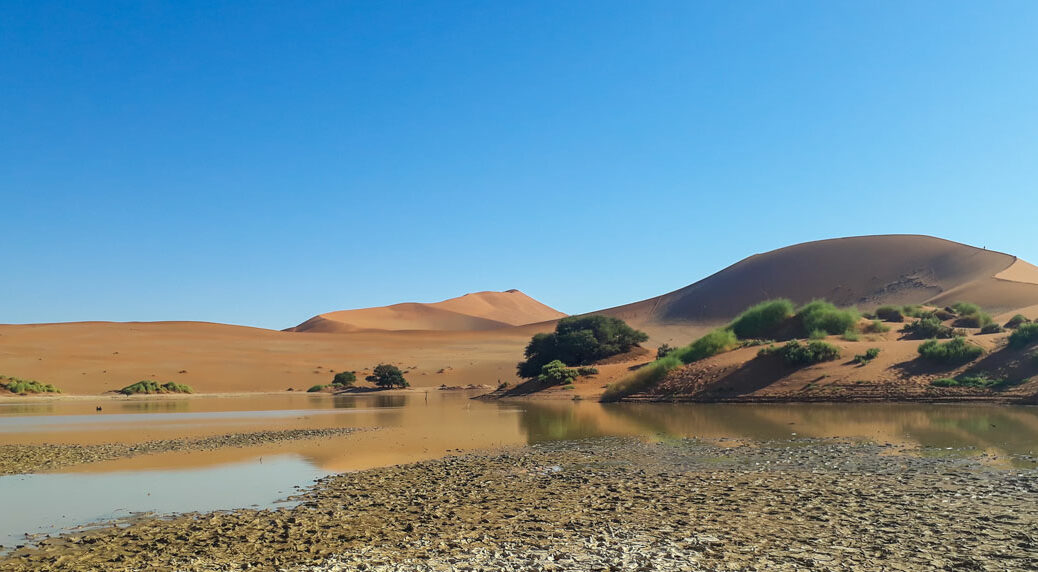 Seeing Namibia so lush and green after this year’s good rains was special of itself. But several bucket-list experiences really made this trip one for the memory banks. By Lizette Swart

In April I took a special trip to Namibia. I wanted to show friends and family around the country I first visited in the 1990s and have returned to many times since. To make it even more memorable we’d planned several bucket-list experiences for our tour around the country.

I was aware of the high rainfall in Namibia this year. Besides scouting the forums for news on roads along my route that might have been washed away by flash floods, I did not give it much thought. I would discover the rain had completely transformed parts of the country!

Negative Covid-19 test in hand, I set off for the Vioolsdrift/Noordoewer border post.

Also read: SA to Namibia and back during Covid

Armed with all the necessary documents completed beforehand, I breezed through the border within 30 minutes. I spent my first evening in Namibia on the banks of the Orange River, which was still flowing strongly but no longer threatening to flood the lodges along the riverbank.

Never one to travel on tar when there is a gravel road available, I set off on the C37, heading towards Keetmanshoop and Windhoek. The mountains of the Fish River Canyon loomed on my left, but I chose to bypass the canyon. In my sights? A visit to Brukkaros Crater and the site of the Finger of God, Mukurob, which collapsed in 1988.

Naute Dam was still overflowing, with the C12 completely washed away, but a detour on top of the dam wall was clearly marked with road signs. Refuelling in Keetmanshoop proved to be a challenge as my fuel cap would not open, and all workshops were closed on Sunday afternoon. Rassie’s Towing Service came to the rescue and quickly fixed the problem with a multi-tool. Having lost precious time in the process, I had to choose between Brukkaros and Mukurob.

Deciding that I would need more than just a quick glance of the crater, I did a ‘quick’ detour to Mukurob. It was soon clear that the rains in Namibia had not yet stopped. The D3919 is a pretty good gravel road, but in several places I had to cross large pools of water and mud in the road. The site itself was (as promised on forums) unimpressive, but I am glad I went. Having learnt about this rock in school, I’ve always had it on my bucket list.

I arrived at River Chalets in Mariental as the sun was setting and I found the service efficient, friendly and very welcoming!

The next morning I set off for Windhoek, but could not stop marvelling at the green grass and trees along the road. Just outside Windhoek, Acacia B&B was my home for a few nights while I waited for my companions to arrive. Our destination would be Okahandja and Von Bach Dam. Arriving on a Thursday afternoon, the campsite was empty and I revelled in having it all to myself. I was promised a spectacular sunset, and the promises were fulfilled (as was the promise of rain!).

Heading westwards towards Wilhelmstal (because I could), I spent the next night at Gross Barmen Hot Spring resort. It was when I checked in here that I realised NWR is running specials on most of their resorts. It was also a long weekend in Namibia, and the Namibians were making good use of the excellent rates!

More rain fell that night, and on our way towards Halali Camp the next day, we passed dense vegetation. Never before have I seen grass that high in Etosha.

Many of the roads towards the fountains in the south were closed due to being under water and we concentrated our game drives around the edge of Etosha Pan. With so much water, the waterholes were not frequented by the game as in the dry season and our sightings were limited to mainly giraffe, springbok, wildebeest, zebra and giraffe. Fortunately we had some keen birders in the car and a lot of time was spent trying to identify the LBJs for a change!

Heading to the Skeleton Coast

Our next stop was Twyfelfontein. Knowing that the Huab River was recently flowing, I called ahead to Twyfelfontein Country Lodge to check on the state of the road between Khorixas, Twyfelfontein and Springbokwasser. They assured us that the road was passable. The fact that “someone came through with a small car this morning” gave me hope the Terios would make it. Happily breezing through a badly washed away but almost dry riverbed, we refuelled at the lodge’s workshop before heading towards the Skeleton Coast.

The Ugab River Mouth gave me a “heart in my throat” moment again, but a clear path on the right hand side bypassed the deep muddy tracks in the road. Soon we stopped at Cape Cross to marvel at the seals.

An adventurous time in Swakopmund

Swakopmund was home for the next few days, but with so much to do, we could have stayed longer! We headed south to Walvis Bay on a misty morning where Eco Marine took us kayaking with seals. Graham’s calm, friendly and efficient instructions soon had us all paddling in the bay. I swear those seals stick their heads out of the water just to laugh at the city slickers struggling along at a snail’s pace while they glide around the kayaks!

A gin tasting and lunch at The Copper and Coal Distillery (by appointment only) soon warmed the extremities. I am very reluctant to let go of my vehicle’s steering wheel, but it worked against me this time. I enjoyed the Namibian tonic water while the rest tried out gin pairings with all kinds of amazing flavours. Next time I will arrange a driver!

Another bucket-list item for me was to explore the dunes with Sandwich Harbour 4×4 Tours. Unfortunately the view over the lagoon from the top of the dunes was obscured by the mist common to the Namib Desert. But we still enjoyed the thrill of racing up and down the dunes with our competent guide who has been guiding here for 17 years.

I collected a permit from the Ministry of Environment and Tourism Office the next morning to explore the Welwitschia Plains 4×4 Trail and Moon Landscape. Lunch at the Goanikontes Oasis included freshly baked bread, which we thoroughly appreciated after a hot, thirsty morning on the badly corrugated D1991.

Heading towards Sossusvlei, the Kuiseb Canyon is always a spectacular sight. This time there was even a trickle of water flowing in the Kuiseb riverbed.

Solitaire, as always, provided welcome refreshment and delicious apple crumble. My very first time in Namibia, way back in the 1990s, I refuelled at Solitaire with a hand-operated fuel pump (now out of use and on display next to the shop).

A balloon safari over the Namib was first on the list, and we set off in the dark for Namib Sky Balloon Safaris. After a briefing the group gathered to watch the balloon being placed and filled with hot air. Then we embarked on a flight over the Namib Desert followed by a champagne breakfast. (I really need to get a driver next time!)

The following day was set aside for exploring the sites in Sossusvlei, and we were soon on top of Dune 45.

I knew that the Tsauchab River had been flowing a few months ago, but the big surprise came as we approached the end of the tar. Whereas I usually knew where the riverbed was by the line of trees in the distance, now there were clear signs that the river had spread through the valley. It had clearly covered the tarred road with water and mud not too long ago.

Sossusvlei Pan itself still had plenty of water in it and I was surprised to find a few water birds happily bobbing away on what had been a dry dusty pan for the past 10 years!

Our tour ended with another unforgettable experience at NamibRand Nature Reserve: hiking the Tok Tokkie Trail. But that is worth a blog all on its own.