If you are looking for a taste of wild Africa with little Western human interference, an abundance of animals and birds, beautiful sunsets and masses of water, the western part of the Zambezi region of Namibia is the place to go. The Zambezi was known as the Caprivi until 2013 and stretches out like an arm and protecting hand over Botswana. Lying in the far north-east of Namibia, the Caprivi region stretches out between Angola, Zambia and Botswana and touches Zimbabwe at the confluence of the Chobe and Zambezi Rivers. 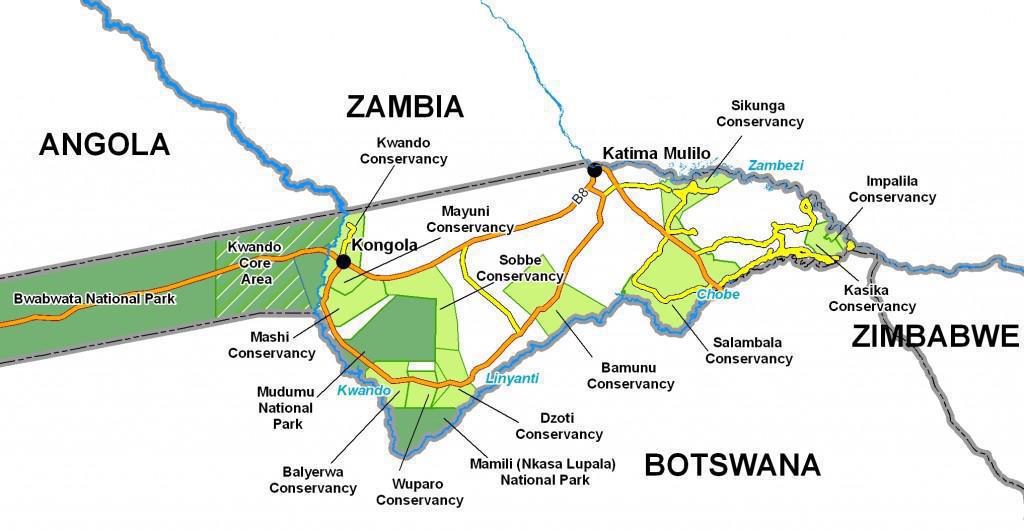 Rivers of the Zambezi region

The terrain of the Zambezi region is mostly made up of woodland and, because of all the river systems: swamps, floodplains and wetlands. The four main rivers that run through this narrow strip of land, the Zambezi, Kwando, Linyanti and Chobe, offer an angling paradise and are utilised to the full by countless fishing camps and lodges.

The Kwando- Linyanti is a unique and very interesting river system. Both rivers change their flow around the Linyanti Swamp area at certain times of the year, depending on which one has the highest water level. The Caprivi has lush vegetation and many of the large woody species can be found here. Be on the lookout for Silver Cluster-leaf, Baobab, a few of the Acacia species, Zambezi Teak, Bird Plum, Witgat, Mopane, Jackal-berry, Makalani Palms, Sausage Tree, Wild Date Palm, Potato-bush, Kiaat and Buffalo-thorn to name but a few.

Conservation areas of the Zambezi

Almost all of western Zambezi’s surface area consists of national parks and conservancies and without any fences or gates you don’t have any idea when you enter or exit these areas. Humans and wild animals live side by side in western Zambezi without any fences between them. You can expect to find antelope, elephant, buffalo, hippopotamus, zebra, blue wildebeest, lion, spotted hyena, leopard, cheetah, crocodile, red lechwe, common reedbuck and sitatunga almost anywhere because the land still belongs to the animals.

The Bwabwata, Mudumu and Mamili (Nkasa Lupala) National Parks are interspersed by various conservancies (land that belongs to communities). These communities live in little rural villages where the houses and sheltering are built from stones, mud, sticks, reed and grass.

Conflict between humans and animals

It is no wonder that conflict with humans is the biggest threat to the carnivores of the Zambezi. According to Lise Hanssen of the Kwando Carnivore Project, up to twelve lions have been shot in the last eighteen months. Apparently the Mudumu pride, consisting of three adult females and four small cubs, stay mostly within the boundaries of the Mudumu National Park. However, one of the prides in the Mamili (Nkasa Lupala) National Park, and possibly sub-adults that have dispersed from the Mudumu Pride, or have come in from Botswana, regularly comes in conflict with the villages in the Balyerwa, Dzoti and Wuparo Conservancies.

The villagers have many cattle, most of which are not herded by day and not kraaled in adequate lion-proof kraals at night. Over one hundred cattle were killed by lions in the Kwando area during 2013 and a further three already by February 2014. This resulted in the destruction of nine lions.

For this reason Lise, who started her research project on the large carnivores (spotted hyena, leopard, wild dog and lion) of the Caprivi in 1999, now partners with Panthera to provide material and assistance to local farmers most affected by lion attacks to improve their kraal structures and make them lion proof.

In collaboration with Panthera and other partners, Lise aim to provide training to farmers and Community Game Guards on building strong kraals, monitoring lion activity outside the protected areas, and investigate ways to deter lions from these areas. Her aim is to ultimately empower the community to be proactive in preventing human-lion conflict.

According to Lise it is not only lions that are threatened. Trucks travelling at high speed along the tar road that bisects the Bwabwata National Park continue to be a major contributor to road accident mortality for spotted hyenas and wild dogs. Six wild dog puppies of a pack which was denning only 500 metres from the tar road were killed by vehicles last year. You can follow the Kwando Carnivore Project on  https://www.facebook.com/KwandoCarnivoreProject The B8, which is the highway between Rundu and Katima Mulilo (the capital and largest city of the Zambezi region) bisects the park. It is an important route as it links Namibia to Botswana, Zambia and Zimbabwe.

The Bwabwata National Park straddles the Kavango and Zambezi regions and extends along the Caprivi strip.  It is bounded by the Okavango River to the west and the Kwando River to the east. Angola lies to the north and Botswana to the south. It is possible to drive along the B8 without even knowing that you are in fact traversing a National Park. However, the area is an important migration route for elephant and other game species between Angola and Botswana. The Bwabwata National Park forms part of a new generation of parks in Namibia which are multiple use areas. Communities live in these parks and continue their daily lives, planting crops, fishing and operating tourism businesses as well as trophy hunting while core conservation areas are proclaimed which are off limits to development and hunting.

There are various accommodation options available on the Kwando River in the Mayuni Conservancy which borders the Bwabwata National Park. The excellent Nambwa Community Camp is one of these and is close to Horse-shoe, a side branch of the Kwando River. This section of the river is shaped like a horse shoe and is a popular gathering place for the animals. Here one can spend hours observing all the different species and enjoy breathtaking sunsets over the river.

The Mamili National Park lies at the southern tip of the Zambezi region and it mainly consists of the Linyanti Swamp. Because of seasonal flooding there is currently no accommodation available in the park.  However, there is a great community camp (Rupara Community Camp) and a luxury tented lodge (Nkasa Rupara Tented Lodge) just outside the park, in the Wuparo Conservancy.

This park has a huge variety of animals and birds and consists mainly of two islands (Nkasa and Lupala Islands) that are covered with dense savannah and woodland and is surrounded by wetland and channels.  You must have a 4×4 to explore this amazing park. The best time to see animals is in the dry season (April to September), not only because of the water levels, but also because the animals will be more visible.

In Mamili we witnessed the interesting hunting method used by the Black Heron, known as canopy feeding. It uses its wings to make a little rondavel and uses the shade it creates to attract fish. Go to http://www.heronconservation.org/styled-5/styled-12/ to learn more about this amazing bird and the interesting way in which it feeds.

The Mudumu National Park consists partly of wetland and is covered in dense savannah and woodland. This park also is home to a wide variety of animals and birds. Accommodation in the park is limited to the luxurious Lianshulu Lodge on the Kwando River or Nakatwa Camp, if you are totally self-sufficient. You must have a 4×4 if you want to explore the park during the rainy season. Unfortunately we didn’t have time to explore the park. There are a wide variety of accommodation options available around Kongola, ranging from luxury lodges to camps. Most of them offer game viewing, fishing and boat trips on the Kwando River. On such a boat trip you are bound to see lots of animals.

Because of all the water, you have to take very special precaution against Malaria when you visit the Zambezi region. There are loads of mosquitoes all year round!