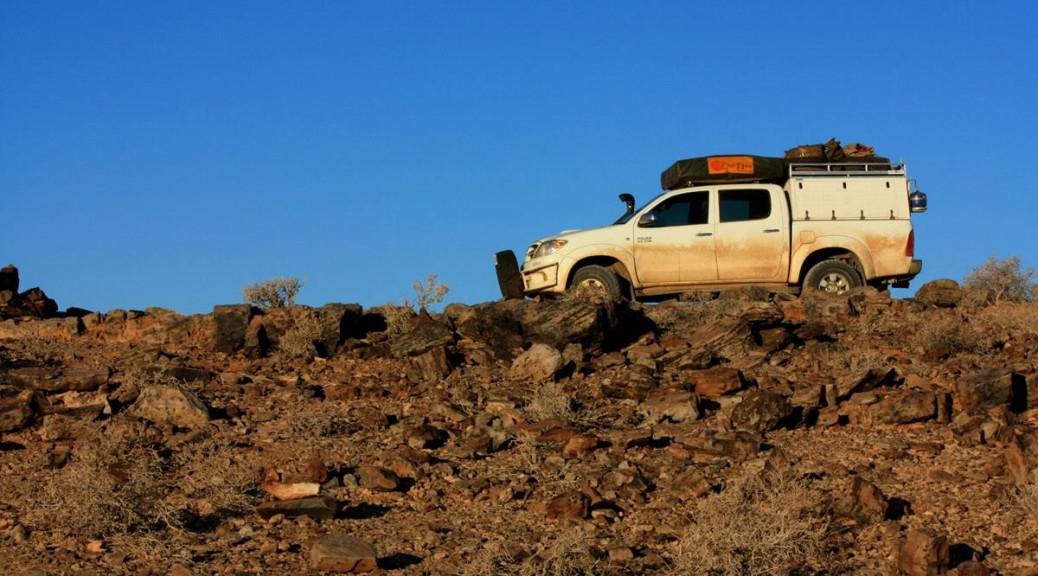 During our recent seven month return trip from Cape Town to Ethiopia, the Toyota Hilux proved to be an absolute star. It did not break down once and did not miss a single beat over 33 231km.

We learned a lot and would like to pass on our experience to prospective overlanders. The one thing that we did not fit, which could have been useful (see the blog about the preparation of the vehicle) was a winch. We’d advise taking along at least a hand-operated winch for an extended trip into Africa.

We had to replace three shock absorbers during the trip and next time we would take the South African installation receipts if they are still under guarantee during a trip.

One running board was badly mauled (the fault of the driver) and both will be replaced with heavy steel tube.

Little niggles included the hooter electrical connections that needed cleaning, a headlight that had to be re-fastened and door catches which seized up with dust.

However, we were not as lucky with the after-market fitments as we were with the vehicle.  Many of them packed up and had to be fixed either during the trip or will be done now that we are home.

The drawer and fridge slide rails collapsed.  Despite our sliders being rated for well over the mass they carried, eventually the ball bearing rails deformed and the steel balls fell out. One slide on the grocery drawer also sheared off its mounting fasteners. We are now going to investigate fitting dual rails to share the load. Another possible solution would be to make up wood/nylon slides with a support under the base of the slide to stop sag at full extension.

The dual battery mount in the engine compartment was only supported at three points with no support at the top of the battery. This, we’ve recently learnt, is important to prevent movement. When the two supporting struts broke off, the heavy battery was left ‘flapping’ on one bolt which was threaded into a nut welded into the thin metal of the wheel arch. This then broke loose, leaving the battery and its holder completely unsecured, whereupon the battery holder started to chafe a hole in a hydraulic pipe, as well as tearing a large hole in the wheel arch.  In Kampala we had the battery secured at five points and we had the semi-deep cycle battery replaced in Lusaka. We had been assured that this battery was adequate for its primary task of powering the fridge, but this proved not to be the case; a deep cycle battery being preferable.

The rear fasteners on the bash plate came loose and vibration stripped the threads in the chassis. This could have been prevented had we performed more frequent tighten up inspections and had lock nuts been fitted to the bolts.

The air suspension units worked well for us until the air pipe, and some adjacent electrical wiring, were burnt by the exhaust gases. The suspension unit then lost pressure, bottomed out and broke a hole in the top of the unit. Great care must be taken when routing any utilities (air or electrical) in the region of the exhaust. With vibration these can move over time into the path of hot gases.

We were grateful for the long-range fuel tank which enabled us to fill up at trusted fuel stations where we had a better chance of getting good quality fuel. We had heard too many stories of people buying poor quality fuel out of drums or from fuel stations where leaking underground tanks may contaminate it with water or it could be cut with less expensive kerosene. Our 3CR12 stainless steel extra tank developed at least one tiny leak which was fortunately accessible and could be temporarily sealed by rubbing dry soap into the crack. The wisdom of mounting the spare wheel under this fuel tank, whilst convenient, is questionable as it lowers the spare wheel which will stress the fuel tank when it bottoms out on an obstacle. The standard Toyota fuel filter worked well.

The water tanks were fabricated from 1.5mm stainless steel and both eventually leaked – the ‘dirty’ tank could still hold around 15l whilst the drinking water tank eventually held nothing. We have yet to strip out these tanks and determine the cause, but almost certainly the brittle metal of the weld seams will have cracked and will have to be reinforced when they are repaired.

Despite having fitted what were reportedly the best off-road tyres (BF Goodrich All Terrain tubeless) four of these (all on the rear and inflated to around 3 bar) punctured on the tread section and couldn’t be permanently repaired using plugs.

Initially the plug would stop the leak, but over time on rough roads the plug would pull out.  It was only by chance and constant checking that we didn’t ruin a tyre and, after the problems we had, we would in future fit automatic tyre pressure indicators. These give one a much better chance of detecting a puncture before the tyre is written off.

We had one spare tyre on a rim and one without a rim. Next time we’d leave with two spare tyres on rims.

Close examination shows that one of the rear canopy struts now has a small crack and requires re-welding. This is probably due to all the weight we were carrying on top on rough roads. A weld on the spare gas bottle holder also cracked completely but fortunately the bottle was tied on with rope as a precaution against this.