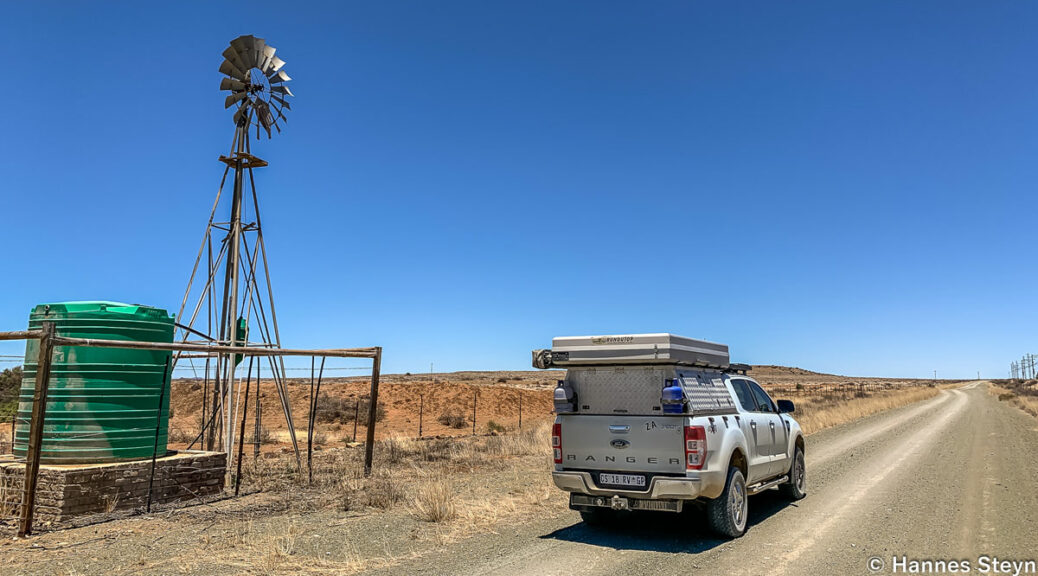 On a 10-day trip from north to south, Hannes Steyn stuck to gravel roads wherever possible and saw the true countryside. Making his way through the Karoo, he also saw things he’d never imagined.

Travelling along gravel roads takes the overlander to little-known towns and unusual sights. Such was Hannes Steyn’s experience on his trip from Pretoria to Cape Town: 10 days all along back routes. This is a condensed version of his trip report.

Read part 1 of On gravel roads to Cape Town

The day of punctures… About 70km along the gravel road to Loxton, on a sharp right-hand bend with loose shale, I drifted into the curb and suffered a sidewall cut on a tyre. While changing it, I discovered another tyre with a puncture – this we would have to replace in Fraserburg. The last stretch towards Loxton was scenic, with active farm life and stacked boulders that evoke the Giants’ Playground. We arrived in Fraserburg over the lunch hour and since the tyre shop was closed, had something cold at Kliphuis restaurant. The result was that we returned to the tyre shop much later than planned and had to take the tar road to Merweville to make up time.

The road to Sutherland was in fairly good condition and easy going on the way up the passes. Allemanshoek and Rammelkop are back-to-back passes that are both spectacular, quite steep and rather rough. The view from the plateau was breathtaking. We had to pinch ourselves when we saw four 1950’s Mercedes Pontons approaching from Sutherland – we couldn’t quite believe what we were seeing. The Pontons were on a tour of the Karoo, with Merweville their destination for the day. After a superb brunch at the Whitehouse Inn in Sutherland, we headed towards the Tankwa via the iconic Ouberg Pass. Eccentric artwork greeted us and we quickly checked in before getting something cold at the Onverklaar Bar.

When we discovered the Old Post Route was closed, we decided to take the road via Uitspankraal Pass and a rather unpredictable river crossing at the Doring River. A single downpour can quickly change the water levels and the detour is a lengthy one, but we were in luck and crossed easily. In Wupperthal we found the rebuilding after the big fire coming along steadily. A quick lunch at Cederberg Oasis was followed with a visit to see the rock art at Stadsaal Caves.

After a brief stop to view Lot’s Wife, we continued towards Uitkyk Pass and were met by the distressing sight of a car wreck. From markings on the ground we could tell the vehicle had rolled several times. We just hoped nobody had been killed or injured – we would later pass the recovery vehicle come to salvage the wreck. We headed north along the gravel road that follows the Olifants River and at the upper end of Clanwilliam Dam stopped at the Traveller’s Cave. From Clanwilliam we turned south to make our way to Trawal and Graafwater. The railway service tracks from Graafwater to Redelinghuys were soft sand in places and made for a fantastic drive.

We left Redelinghuys with the goal of breakfast at Evita se Perron, making our way to Darling via a few passes. Olof Bergh Pass is a gentle up and down while Kapteinskloof is a scenic drive that includes quite a deep crossing at the Hol River. In Darling we visited the Blockhouse Memorial, dedicated to soldiers from the area who had died in the two world wars. At Darling Brewery we stocked up on some critical supplies. Following the railway service road we headed towards Kalbaskraal and Klipheuwel, where we had our first sighting of Table Mountain. The end was near… Durbanville was the closest we could get to Cape Town with multiple gravel roads ending on its outskirts.

Fancy planning your own gravel travel adventure? Tracks4Africa maps feature the full road network, including gravel and sand, so you can choose your tracks. Do you have a favourite route along gravel roads? Let us know in the comments below.