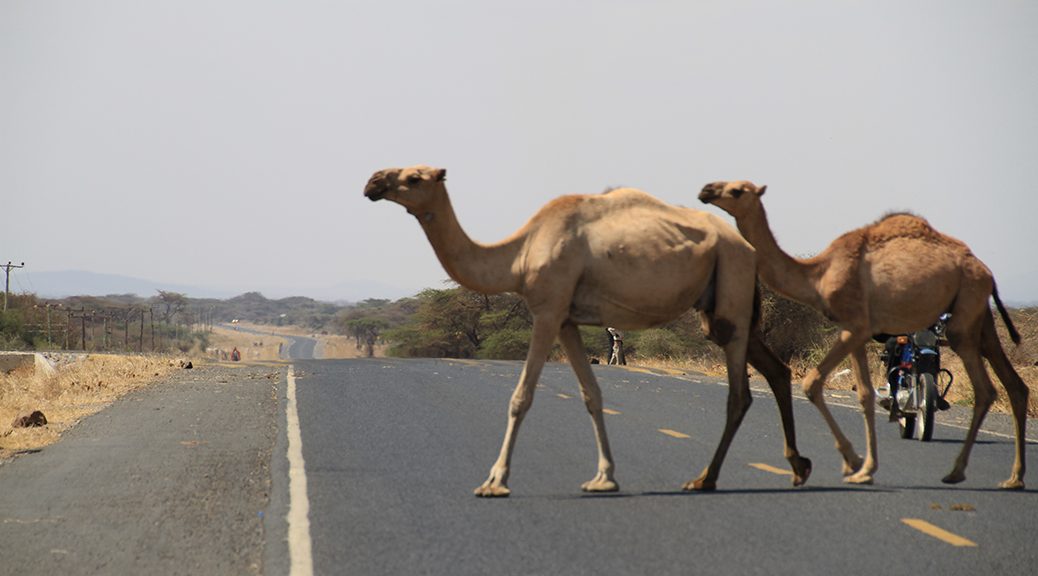 Travelling overland in Ethiopia, Sudan and Egypt – the grand finale of an epic road trip – comes with unique challenges and you’ll need an extra dose of everything! By Romi Boom

Ethiopia, even without the Amharic language, is a totally unfamiliar experience for overlanders. We’d heard about good tar roads. Don’t believe a word of it! Potholes and people everywhere along the road, plus donkeys, goats, horses, sheep, dogs and cattle that have right of way. The result is that any speed above 50km/h is not doable. Even when the road gets better, the traffic gets worse.

On the upside, the country has unforgettable sights, including the most beautiful mountains, valleys and escarpments in the whole world. The Blue Nile Gorge, which contests the Fish River Canyon’s claim as Africa’s deepest, is amazing, so too the monasteries in the middle of Lake Tana, accessed by a relaxing half-day cruise from Bahir Dar. The colourful murals depict scenes from the Old Testament and mirror the barefoot pilgrims on real-life donkeys on land.

The road to Lalibela is one long scenic splendour, although the main road – good asphalt, built and then rebuilt by the Chinese – carries so much pedestrian traffic that it is pure torture. Words cannot describe the wonder that is Lalibela. The 12 churches in the complex, created out of stone eight centuries ago, were an absolute highlight of our trip.

The 400km route between Lalibela and Aksum, via Abi Aday, on back roads in the highlands, is incomparable. The road does not permit more than 40km/h average, but the trip is immensely rewarding. On the first 250km stretch we saw only six other vehicles: two Hilux bakkies, a Land Cruiser, two trucks and a bus.

It was a huge learning curve to explore the fascinating history of the Aksumite kingdom. One of the great civilisations in the first centuries AD, and one of the first to embrace Christianity, Aksum was an esteemed world trading power, but it never recovered from its fall in the 10th century AD, whereafter the Lalibela kingdom became prominent.

The trip from Aksum to Gondar through the spectacular Simien Mountains is perhaps the most dramatic you will ever have to negotiate. “Five hours of hell,” to quote my very experienced driver. Narrow mountain passes, non-stop switchbacks, 15km/hr average. It took us almost nine hours to drive 350km. Luckily we had an early 7:00 start, and the first 100km stretch was excellent tar.

The Chinese have built wonderful roads throughout Africa; the very best of all have to be in Sudan. New asphalt and cheap fuel were conducive to a cruising speed of 140km/h. Beware the traffic cops! From the port town of Wadi Halfa, we took the ferry to Aswan in Egypt.

Egypt: An induction into bureaucracy

In Aswan, we found a ghost town as far as the Nile cruise boats were concerned. The tourism industry had collapsed, we were told, because of the ongoing crisis in Syria. Hotels were empty, some closed down indefinitely, staffers desperate for work. Feluccas were moored, so too cruise boats, lying eight deep, restaurants awaited patrons in vain, 80% of souvenir shops were closed.

Our Prado was in port when we got there on Saturday morning, having picked up the customs manager as well as the engineer (!) en route. The latter’s only task was to check the chassis and engine numbers against the carnet. After about 90 minutes we got the Prado offloaded safely, having built a makeshift ramp after much toing and froing.

Egyptian bureaucracy remains byzantine. The number of forms and documents to be completed boggle the mind. Of course, everything is in Arabic, so a fixer is indispensable. To add insult to injury, you pay baksheesh for everything. The captain of the adjacent barge wanted a tip in his pocket before he moved his vessel so that the cargo ferry could sidle up to the quay. The gateman wanted “something to remember us by” before we could leave. The engineer had to be paid for looking at a piece of paper.

Finally, sporting temporary Egyptian number plates, we were headed for Luxor, past lush green farming plots on both east and west banks of the Nile. Whilst admiring the lovely bougainvillaea lining the streets of Luxor, we learnt that local drivers ignore red traffic lights. When we dutifully stopped, one of them went right into our rear. Fortunately, he hit the tow bar and we suffered no damage.

Of all the highlights, our most memorable experience was Egypt’s White Desert National Park. About 6km off the road, we were in a world of our own. Peace, quiet and haunting beauty, with thousands of limestone outcrops in wind-sculpted phantasmagoric mushroom shapes. An unforgettable night sleeping wild under zillions of stars, the only company a curious fennec fox who persistently circled our sleeping bags.

The road to the pyramids

Driving is bliss on Egypt’s impressive roads, although we despaired of the countless roadblocks with cops asking to see passports. Invariably they just handed the passports back and waved us on with good cheer, not being able to speak English, although a few of them managed to say: “Welcome to Egypt”. Dakhla Oasis, one of four in the Western Desert, likewise left a lasting impression after a night at Bedouin Camp, a striking example of desert architecture with domed roofs, and an early morning dip in the hot spring.

The most boring stretch of road in the world (even worse than Calvinia to Bitterfontein) runs from Bahariya Oasis north to Cairo. We passed through oil fields, with lots of tankers, and were shocked by the housing developments in the southern suburbs of Cairo. High rises as far as the eye can see, packed like sardines. The lack of living space and the garbage everywhere is beyond description; Cairenes will soon bury themselves underneath piles of rubbish.

There were hardly any tourists at the Giza pyramids, and for safety, we parked cheekily right alongside two Casspirs. Lunch at a civilised hotel felt strange – outside the hotel grounds, the reality check of filthy, dusty Giza. Trying to get out of Cairo traffic is a total nightmare with signs in Arabic and only sporadically in English. Alleyways so narrow that one could barely drive were the result of one wrong turn, and we got stuck in chaotic, honking, miserable traffic when we found ourselves on the Alex Agric Road, whereas we wanted to be on the Alex Desert Road. The take-home lesson: always use your GPS, loaded with T4A, in conjunction with high detail paper maps.

We eventually turned around, found the new desert road and reached Alexandria late afternoon. The whiffs of salty air immediately revived us. It was emotional to see the Med after 16 000km. The weather was pleasant, about 30 degrees and locals were out strolling oceanside along the Corniche. A holiday buzz, so different to Cairo, very European, could be Athens or Marseilles. Exactly like Durrell described in the Alexandria Quartet.

Finally, the Pharos at Alexandria, to bring the trip full circle from the lighthouse at Agulhas. No punctures, no mechanical issues, just plenty of stamps in our passports and memories to last a lifetime.

Along the road from Alex to El Alamein, just over 100km, there are non-stop resort-style housing developments, for Cairo’s elite and the armed forces. It boggles the mind how all these apartments and houses can be filled. The housing boom is funded by oil money, a senseless investment considering the need for schools and clinics throughout the country.

El Alamein is touching, one has no words. The German memorial is stark and has no soul. The Italian one is stylish and artistic, resplendent in the purest of white. The most poignant, however, is the Commonwealth graveyard with its crosses, and the South African section especially heartrending.

Inspired by Romi’s Cape to Cairo adventure and interested in overlanding once lockdown is over? Browse our online shop for incredible discounts on Garmin GPS Maps, Guide Books, Atlas’ and more. 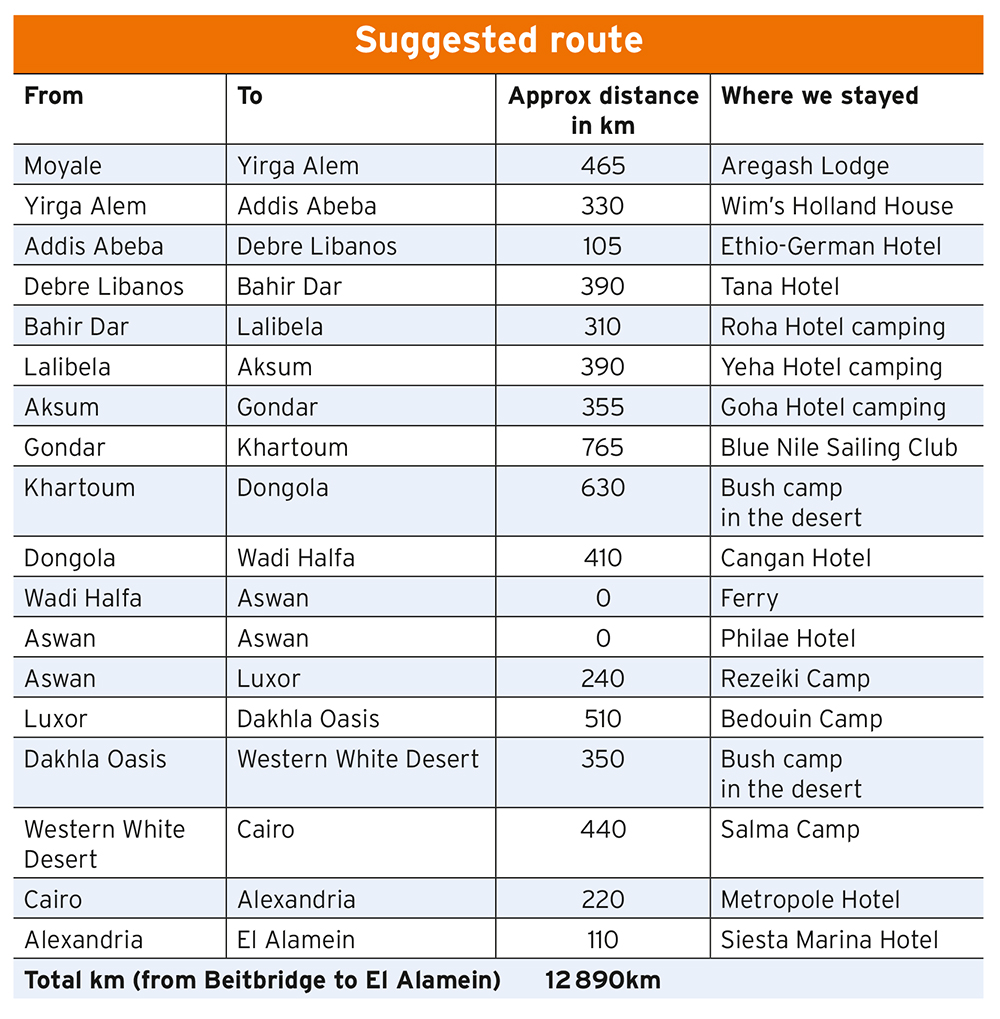