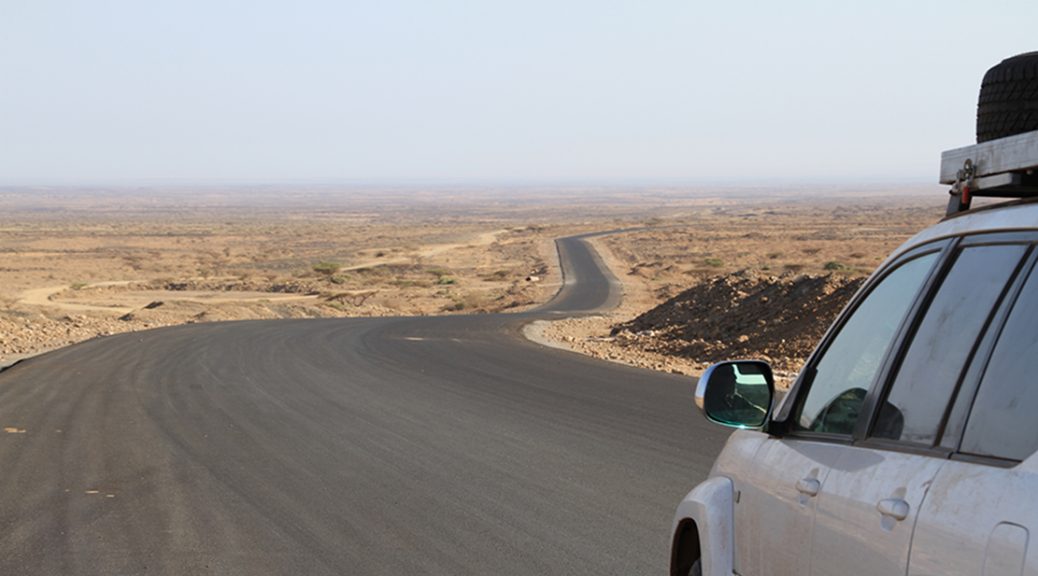 The holy grail for overland adventurers is the Cape to Cairo road trip. If you have 10 weeks to spare, patience and a sense of humour, here’s what to expect from the roads and the border posts on this overland adventure. By Romi Boom

The long road north can be divided into two parts: a relatively tame part through Zimbabwe, Zambia, Tanzania and Kenya. The trip to the Maasai Mara is fairly straightforward and the itinerary usually includes the Serengeti in Tanzania, South Luangwa in Zambia and a meander along Lake Malawi. You’ll encounter plenty of overlanders and a plethora of delightful campsites.

Intrepid explorers would do well to push further. Northern Kenya is frontier land, with camels by the roadside, veiled Arabic women, Samburu tribesmen with feathers in their headdress, Boran cattle herds – a different country almost. Travelling in Ethiopia, Sudan and Egypt come with unique challenges and you’ll need an extra dose of everything! It is the undisputed highlight of a Cape to Cairo road trip.

Zimbabwe and Zambia: A swift start

Having travelled extensively on the better-known safari circuit, our aim was to hotfoot it along the great north road from South Africa to Nairobi. In Zimbabwe, the locals were as friendly as ever, but the officials did nothing for our progress. Roadblocks every four or five kilometres to check driver’s licence, added to dozens and dozens of speed traps using a laser (40km, 60km, 80km – that’s it!).

Zambia was far more welcoming, prosperous and tuned in to tourists’ needs. It is well worth paying fixers at the joint Zim-Zam border post with its chaotic queue of at least 100 trucks and milling crowds to speed up the process. We made excellent progress on the excellent new tar road from Kapiri Mposhi (only the last 150km was badly potholed), with 99% of the trucks seemingly destined for the Copperbelt.

Tanzania: Time difference at the border

Tunduma border post will forever be a crazy confused mess and you should set aside at least two and a half hours for the red tape. We got there early, just past 6am, but because Tanzania is an hour earlier than Zambia, everything on the other side was functioning, while the Zambians were still rubbing the sleep from their eyes, or nowhere to be found. Simply walk across to Tanzania, with the locals, get a fair amount of paperwork sorted out, then walk straight back to Zambia, get yourselves and your vehicle officially stamped out of the country, and drive through the gate to get the vehicle checked into Tanzania. You’ll pay road toll, council levy, a carbon tax – each time there is a queue, and sometimes official stamps go missing, so you have to wait until another person with more savvy arrives on the scene.

The roads in Tanzania are tip-top (mostly), but the traffic police are a menace. Imagine three different sets of cops, all armed with radar, within one kilometre of each other. As soon as you enter a village, you have to step on the brakes and slow down to 50km/h. Wherever you see a zebra crossing, the speed is 30km/h. On the open road, the sky is the limit.

Our border crossing into Kenya was absolutely hassle-free and took 45 minutes. Driving for 12 hours, day after day, we safely reached Nairobi on our eighth day from Hermanus. Almost 6,000km – but instead of celebration, we were stuck in a traffic jam for five hours. Friday afternoon peak hour, granted, but no traffic moving in any direction. Capetonians, count your blessings! We arrived at our campsite in Karen in the dark, desperately in need of a week’s R&R in the Masai Mara.

Uganda is clean and decent, everyone speaks English and it has to be the most beautiful of any African country that we visited, bar South Africa, especially when you venture on the back roads. This also helps to avoid the congestion of Kampala, particularly coming from Jinja, where a delightful meander gets you directly onto the ring road. The western highway to Fort Portal is a dream, the best road we’d driven since SA: no trucks, nor radar guns, and very decent speed humps. Driving southward to Queen Elizabeth National Park we again took a shortcut through remote and utterly rural countryside. This is truly exploring Africa off the beaten track, and we passed several incredible volcanic crater lakes which pock-mark the landscape here. Even travelling at 20km/h is bliss.

The border post to re-enter Kenya was an absolute breeze, 30 minutes and we were through both sides, and driving along Kenyan roads again with their maddening speed humps. The road north was quiet, hardly any trucks or tankers. We relished the outstanding tar for more than 100km past Archer’s Post, thanks to the European Union, and then a passable road all the way to Marsabit. What was meant to take an entire day, we did smilingly in four hours.

From here the overland trip takes on a different flavour and you need a mind-shift to tackle the loneliest road in Africa, the 500km from Marsabit to Moyale. Nowadays travellers can look forward to a 4-lane Chinese tarred highway, but we still had to endure the old road, culminating in especially taxing badlands, the low acacia countryside being a favourite hiding place of Somali shiftas. At Moyale we learnt that Ethiopian customs do not work on a Sunday (although immigrations are open), so we were forced to spend the night in the biggest dump of a border town ever.

The next day immigrations procedures on both sides of the border went smoothly. We soon realised that nothing could have prepared us for Ethiopia.

Time to spare? Game viewing in Uganda and Kenya

Driving every single day is tough going and the days are really long with sensory overload. Our biggest mistake was overestimating average speed. The roads, even when they are good, hardly ever allow for more than 50km/h average. As a result, we decided to leave Rwanda out of the itinerary. One of the benefits of independent travel is that you can chop and change as you go along.

If you’re not fixated on seeing gorillas, or you haven’t booked a permit in advance, a novel alternative is chimpanzee tracking at Kibale National Park in Uganda. We were the only campers and could purchase a last-minute permit for chimpanzee tracking ($150p/p). The excursion entails four hours’ traipsing through the forest, enjoying several encounters with females and babies. We also came close to an alpha male, and another younger male. Tricky to get good shots of them, since the forest is dense, and most of the time they are up in the canopy, feeding. The booming calls and hoots are beyond description, eerie and stirring at the same time. Note that Uganda’s parks are more expensive than Kenya and even worse than Tanzania.

Back in Kenya, it proved an excellent decision to recharge our batteries at Samburu National Park. We had a magnificent campsite right on the river’s edge all to ourselves, with plenty of game coming to the water’s edge to drink early evening. Within five minutes of entering the park, we had seen all the specials: Grevy’s zebra, Reticulated giraffe, Gerenuk, two species of Dik-dik, East African oryx (beisa), and Vulturine guineafowl. Another tough day in Africa! 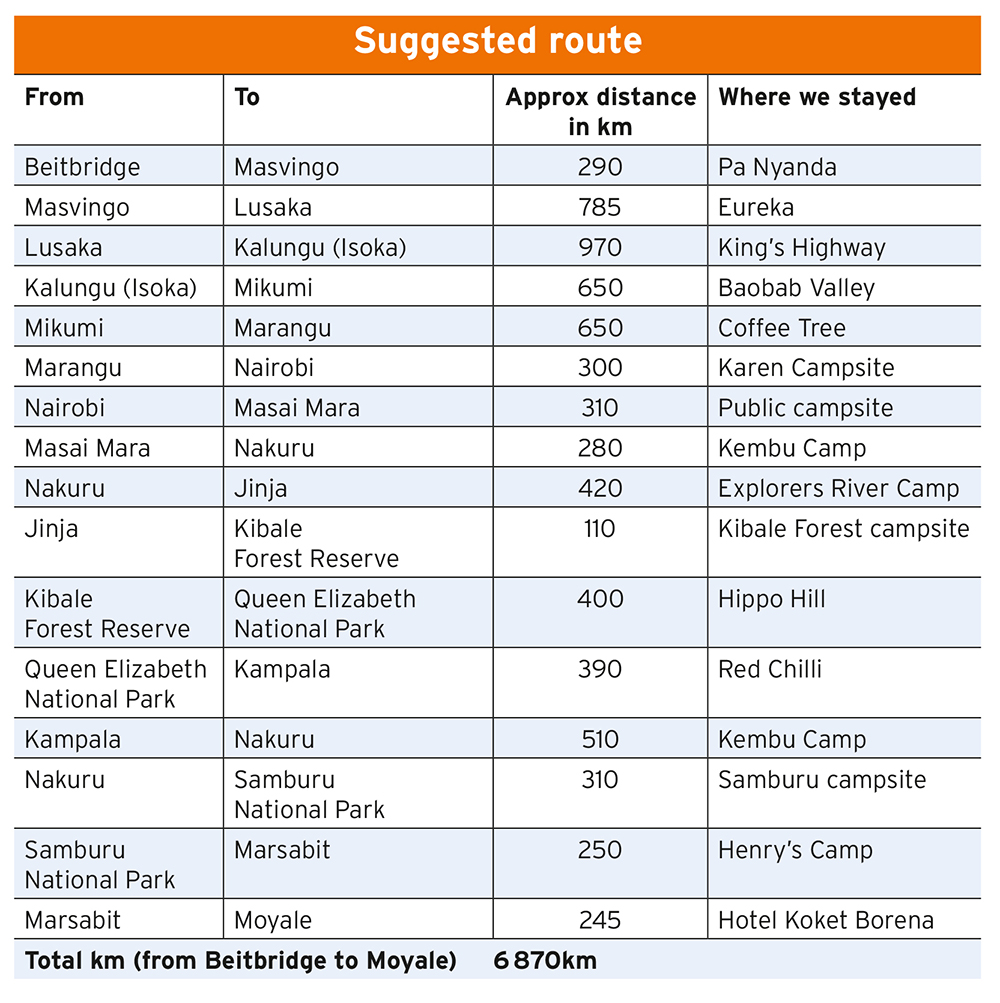